The Navy’s next-gen unmanned minesweeper passed a critical test: It didn’t blow up

If you're gonna pass one test, that's it. 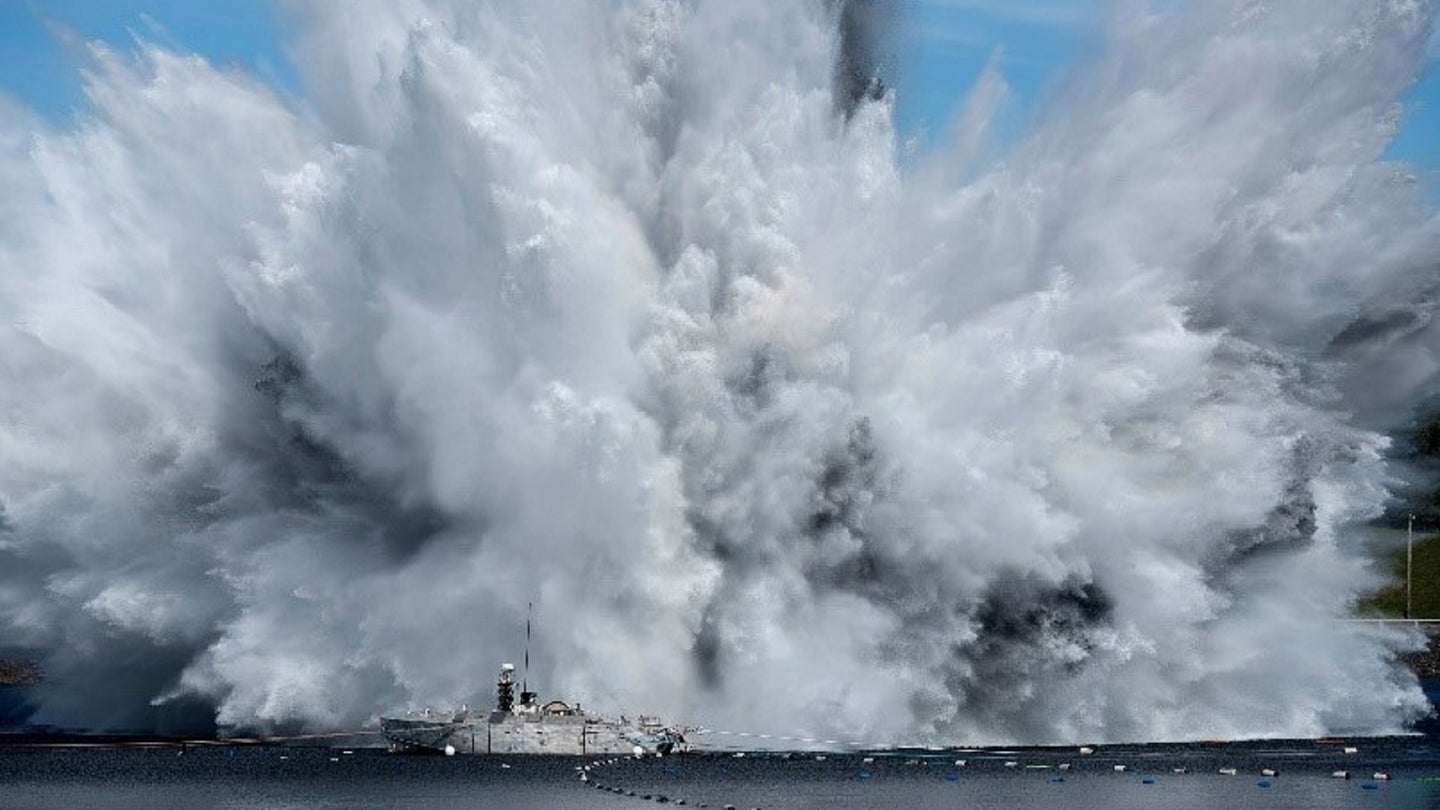 The Unmanned Influence Sweep System (UISS) undergoes an underwater explosion shock test at the Aberdeen Proving Grounds, Md., by the Aberdeen Test Center and Naval Surface Warfare Center Carderock. The shock trials are key for testing the survivability of UISS, a component of the Navy’s suite of mine countermeasure technologies, and its ability to execute its mission in hazardous environments. (U.S. Navy).
SHARE

The Navy’s next generation of unmanned minesweepers passed an important test this week: not sinking when close to a large, underwater explosion. Important when your business is finding and blowing up underwater mines.

The Unmanned Influence Sweep System (UISS) ships have no crew — they’re drone boats — and are designed to be launched from Littoral Combat Ships or piloted from shore, operating remotely and using acoustic and magnetic countermeasures to detect mines.

“Completion of these tests showcased the capability and resiliency of the MCM USV, and is a critical milestone for the program,” said Program Manager Capt. Godfrey “Gus” Weekes in a Navy press statement. “The MCM USV is the centerpiece of the MCM mission package, and this test demonstrates the final steps we’re taking for MCM mission package IOT&E and fielding.”

The underwater explosion shock test was carried out by the Aberdeen Test Center and the Naval Surface Warfare Center (NSWC) Carderock. The UISS has been under evaluation by the Navy for several years, part of the branch’s plan to upgrade its mine-detection capabilities. It would replace the Avenger-class ships and MH-53E Sea Dragon helicopters in the Navy’s minesweeping mission.

The Navy currently operates eight Avenger-class minesweepers – four in Japan, and four in Bahrain, patrolling the Persian Gulf. Cramped and constantly in need of maintenance, they are among the oldest ships in the fleet, running navigation systems off of Windows 2000. It’s not the most glamorous mission, and the ships seem to be at the bottom of the list when it comes to the Navy’s procurement and updates. As one sailor told ProPublica in 2019, “We are essentially the ships that the Navy forgot.”

In 2019, one of the minesweepers stationed in Bahrain caught fire while docked in Bahrain.

The Avenger-class has eclipsed its projected retirement date, and the minesweeping mission — if overlooked — remains one of great importance to the fleet. The Persian Gulf, through which millions of gallons of oil pass through on tankers every year, is also a volatile region. It’s a sea route that has been heavily mined, and U.S. ships have fired warning shots at Iranian vessels. Yet one sailor on an Avenger-class boat reported to ProPublica that Navy minesweepers had trouble distinguishing between crab traps and mines.

Scheduled to begin operating in 2022, the UISS has at least passed a critical test for any vessel: not sinking when it finds a target.