The legend of ‘wall-to-wall counseling,’ the infamous military regulation that never existed 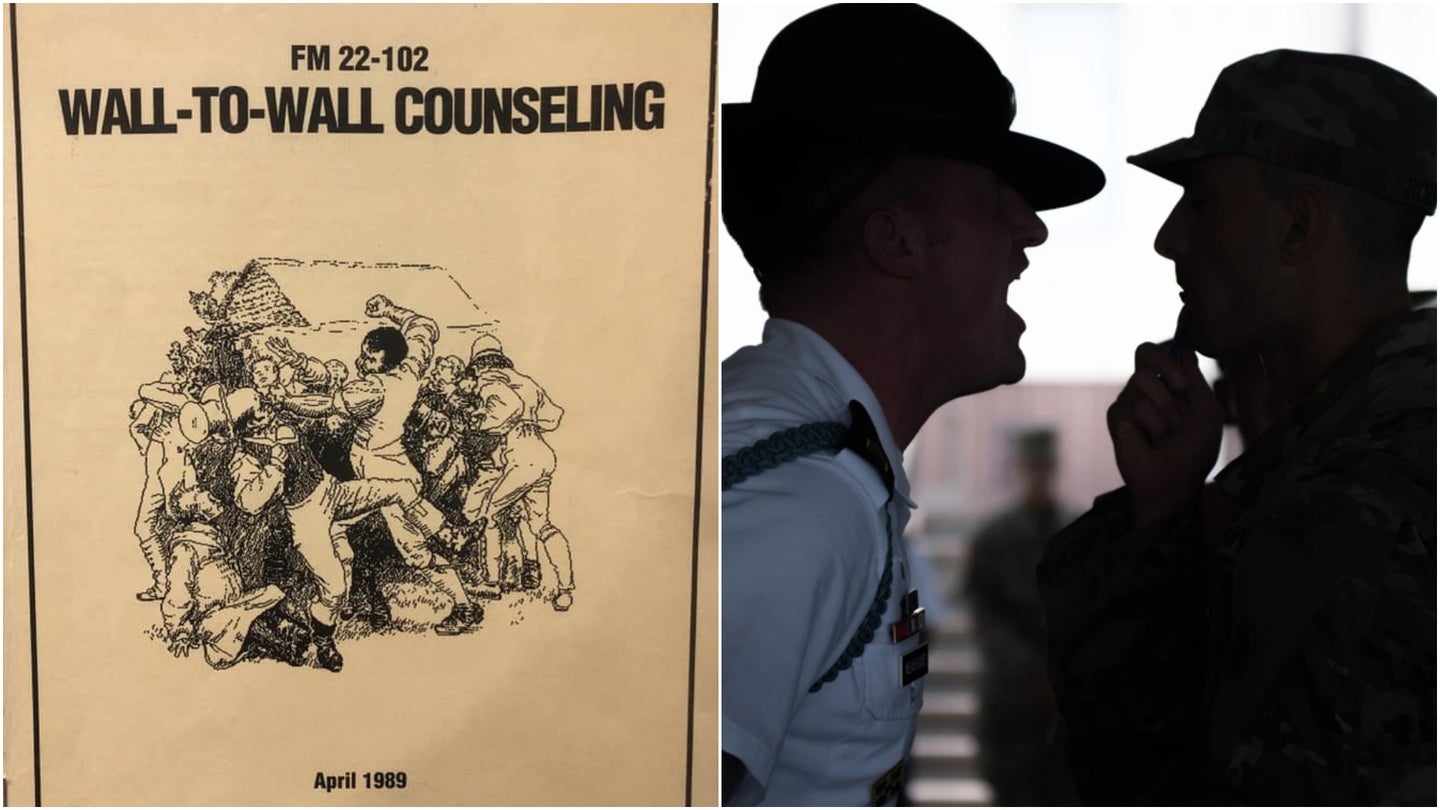 Shortly after making sergeant in 1996, Kenneth Ramos’ supervisor handed him a pamphlet that at first glance looked like any other Army regulation. The document, FM 22-102, came with a distribution restriction, a cover page, thick paragraphs of guidance and all the other regulation-ese that Ramos had studied in depth in preparation for his recent promotion boards.

But after reading the first page, the soldier quickly realized that FM 22-102 wasn’t a regulation, it was a joke. The document recorded the previously unwritten rules of “wall-to-wall counseling,” the military’s euphemism for beating some sense into ne’er-do-well junior service members.

Though the document is tongue-in-cheek, brutal hazing and the idea of ‘wall-to-wall counseling’ is still condoned in some corners of the military. For example, in 2017, Marines at Camp Pendleton, California recorded a corporal threatening to throw a junior Marine “into a fucking wall,” which led to seven noncommissioned officers being punished. Despite hazing being officially banned, a recent government report suggested there could be perhaps tens of thousands of hazing incidents going un-reported in the military, all of which “jeopardize combat readiness and weaken trust within the ranks,” the Government Accountability Office wrote.

With that context in mind, the fake document walks a fine line between encouraging such behavior and reflecting the actual challenges of being an NCO in the military. That duty often involves getting dozens of recent high school graduates from all walks of life to focus on dangerous tasks that are vital to national security, which can no doubt be frustrating at times.

“It’s underground NCO lore,” said Ramos, who retired in 2018 after rising to the rank of Sgt. Major in 30 years of service. “I’ve had my share of problem troops, the ones where everyone thinks ‘I wish I could shake this kid up a little bit,’ but nobody actually does it.”

FM 22-102 breaks down in detail how exactly Army NCOs ought to properly shake up those problem troops. For example, simple infractions “can be dealt with quickly by a simple ass-beating,” which soldiers appreciate because “it saves them the hassle of having to visit the commander for [Uniform Code of Military Justice] action.”

Likewise, soldiers found to be incompetent at their jobs may also “be candidates for wall-to-wall counseling,” the fake regulation says, but not without some nuance. For example, if a soldier just graduated from boot camp, “a corporal punishment would not be a good idea.” But if he has been at his job for two years “and still does not know shit from Shinola, the soldier deserves his ass beat … at the earliest possible opportunity.”

The nuance continues for soldiers who arrive late to military functions. A soldier who has never been late “would not benefit from having the shit beat out of him,” the document says, but a soldier who has been late for four months “is possibly incorrigible and a well-deserved ass-beating would not only be profitable, but enjoyable.”

FM 22-102 goes on to answer the question of ‘to thrash or not to thrash’ for a wide range of offenses, from murder to robbery; and provides advice on how to administer said thrashings. For example, a Hell’s Angels-style motorcycle jacket is not only intimidating to wear while thrashing, “but the half pound of metal” in a biker’s ring “will increase the effectiveness of punches.”

“If you plan to conduct many wall-to-wall counseling sessions … some large tattoos of Vikings beheading people with blood-covered swords would be a good idea,” the document says.

It should be noted that NCOs in the U.S. Army do not actually work like this, at least not anymore. Back before the Civil War, soldiers could be flogged or tied up by their thumbs for misdeeds, but nowadays that kind of thing is considered “cruel or unusual punishment” under military law. Still, who among us has not wanted to break out the knuckle-dusters when confronted with a particularly difficult coworker or teammate?

Ramos said FM 22-102 was similar to the “Anger Translator” sketches by comedians Keegan-Michael Key and Jordan Peele. In the sketches, a mean-eyed character named Luther, played by Key, voices the inner anger and frustration felt by the straight-faced President Barack Obama, played by Peele. Like Luther, FM 22-102 voices the inner anger of NCOs by poking fun at the same regulations which bind them from getting carried away with that anger.

“It did provide a venting outlet,” Ramos said. “It’s like something you say in private circles about how to deal with a problem soldier.”

The origins of FM 22-102 lie in the murky mists of Army lore, but Ramos said he heard it first came up wake of the Vietnam War in the late 1970s.

“The soldiers coming back from Vietnam had discipline problems, and this was done to laugh at it and discuss actual scenarios with leaders,” Ramos said. For example, by 1973, up to 20 percent of soldiers were habitual heroin users, leading one Army commander to even say “If it would get them to give up the hard stuff, I would buy all the marijuana and hashish in the [Mekong] Delta,” according to History.com.

Of course, it also helps that few things scare a new troop more than when an NCO who can cite chapter-and-verse his justification for using a two-by-twelve to deliver swift vengeance for tomfoolery, even if the chapter-and-verse is fictional. Over time, FM 22-102 became an institution all its own.

“It was like a rite of passage,” Ramos said. “If you got this from your mentor it was like he could trust you with the secrets of wall-to-wall counseling, like the secrets of the NCO club.”

Some of those secrets aged better than others. FM 22-102 retains some racially- and sexually-charged language that is straight-up offensive.

“This is not PC,” said Ramos. “You couldn’t write this shit” today.

Despite its flaws, FM 22-102 still stands as an artifact that captures the mood of some of the saltiest, most heavily-regulated human beings on the planet: grumpy noncommissioned officers in the United States Army. In fact, FM 22-102 is in some ways a precursor to the online salt exchanges of today’s military, one of which Ramos plays a key role in. The Army vet is the head of digital outreach for U.S. Army WTF! Moments, an outlet that highlights some of the most absurd aspects of life in the U.S. Army on social media. He also hosts the Monday edition of WTF Nation radio.

“This is like the 1989 version of U.S. Army WTF! Moments,” Ramos said. “It kind of gives you a mental break to laugh at shit, because as a leader you’re going to have to deal with soldiers who commit rape, arson and burglary. It’s something every leader deals with.”

Though he has not seen many physical copies of FM 22-102 recently, Ramos said the document now lives online, and soldiers still joke about it when it’s time to study for promotion boards. In fact, FM 22-102 is so popular that a commenter on the unofficial Air Force subreddit shared an Air Force edition of the document on Monday. The 11-page Air Force Instruction 36-106 looks just as legitimate as any other AFI, except when you look at the date, “01 April 2004” and the front page, which says that airmen and lieutenants caught reading the instruction “will receive an immediate ass whoopin.’”

Farther down, section 2.2.4 “Fucking Off,” details that “airmen are naturally disposed to fuck off when a supervisor is not around. This is detrimental to the good order and discipline of a military unit, and must be corrected immediately,” the AFI says. “A quick slap to the back of the head is usually most effective … Of course, airmen who are repeat offenders may require more extensive counseling.”

Though the date on AFI 36-106 shows April Fools Day, 2004, the origins of the document were not immediately clear. A few informal interviews with Air Force vets showed that the document was not as well known in the Air Force as FM 22-102 is among Army NCOs. Still, AFI 36-106 is another solid entry in the work of salty military leaders.

“The Air Force was born of the Army, so I expected something like this,” Ramos said.

In fact, Ramos thought at first that the AFI was related to the “Bass” controversy of 2020. Shortly after taking the post of Chief Master Sergeant of the Air Force, JoAnne Bass had to contend with many airmen asking on social media whether her last name was pronounced like the species of fish or the musical instrument. While some of the inquiring airmen may have been genuine, others were out to troll, and Bass responded to one by saying “Give me a call Monday … I’d like to chat about it.”

If there was ever an urge to administer a good ol’ fashioned ass whoopin’, Ramos reasoned, that was it.