Social media: where the rules are made up, the points don't matter, and virtually every single error is unforced 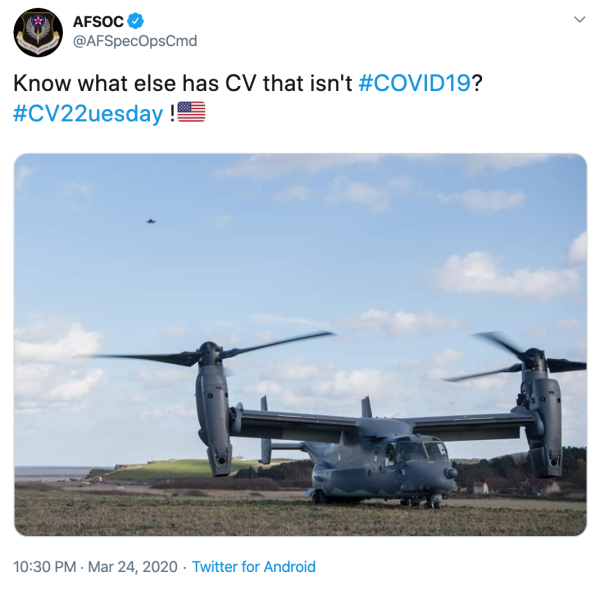 The novel coronavirus (COVID-19) may have killed 544 Americans and sickened another 44,183, according to the latest data from the Centers for Disease Control and Prevention, but that hasn't stopped official military social media channels from attempting to latch on to the topic with some tone deaf jokes.

Just days after an Army social media manager was fired over an “inappropriate” post to the service's official Instagram account, the official Twitter account of Air Force Special Operations Command was more than happy to grace us with this (now deleted) mind-numbingly stupid treasure:

With a third of the country stuck at home amid the spread of the virus and every major media outlet obsessively tracking every single new development, it's hard to get a word in edgewise, so we can understand how this may have seemed like a good way to get in on the conversation — but it wasn't.

Latching onto a hot topic with a dumb joke doesn't just feel awkward and ham-fisted in this case, but deeply wrong. Americans are dying, guys! People are scared! Maybe save your attempts at snarky digital engagement for another time.

Look, we get it: Gallows humor is a pillar of the military community. It lifts us up when times are tough, provides a much-needed distraction, and at its best, works as a pressure release valve, defusing tension so those in uniform can stay focused on their mission.

But an official U.S. military social media account that's followed by civilians and service members alike — who are probably checking it regularly for news updates on facility closures and guidance amid the pandemic — probably isn't the best place for those kinds of jokes.

Social media is a world where the rules are made up, the points don't matter, and  virtually every single error is unforced. But here's a recommendation to PAOs: a pandemic is no time to be cheeky if you're a public-facing member of the U.S. military. Keep the jokes to yourselves — or, better yet, leave them to us.

Anyway, what's the over-under on how long it takes this poor AFSOC PAO or social media specialist or whoever to get their ass handed to them? I'm guessing … 24 hours, maybe? Luckily, 'curriculum vitae' also has 'CV' in it, so I guess that's relevant.