Who Really Gives A Sh*t About The Air Force’s Dumb A-10 Tweet?

Sometimes, Twitter can be great; most of the time, it sucks. Case in point: the idiotic non-scandal today over a... 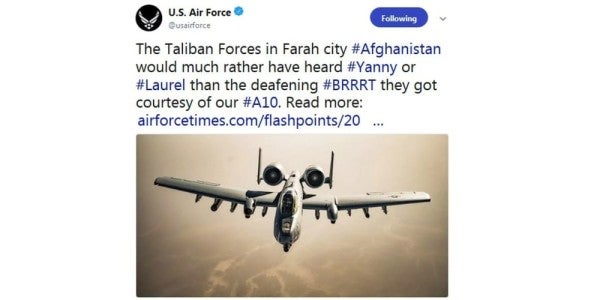 Sometimes, Twitter can be great; most of the time, it sucks.

Case in point: the idiotic non-scandal today over a cheeky attempt by some Air Force PAO to piggyback on the latest hot online trend… the so-called #YannyVsLaurel debate over — you know what? I don’t care and neither should you.

I didn’t laugh, but I also didn’t get that offended that the Air Force might use a mind-numbingly stupid internet trend to call the wrong kind of attention to its operations abroad. Mostly just I thought Wow, the Air Force is having a really epic ‘How do you do, fellow kids?’ moment.

I mean, it’s clearly in bad taste, and probably not ideal in terms of information ops. “Don't get me wrong, I post about killing terrorists and tout the A-10 every chance I get,” as one Air Force vet told me, “but when you cross into joking about death on the battlefield to try and be hip to the current social media joke, it weakens our force and how we are seen.”

No, they're right to remove it. Our nation's Air Force communications shouldn't be writing cutesy tweets about internet memes spliced in with talk of death of an enemy. @usairforce made the right call. Somethings just don't mix.

The Air Force deleted its initial tweet after a few hours and issued an apology acknowledging that the message was, in fact, in “poor taste.” But the internet decided to collectively dunk on this tone-deaf tweet with performative hand-wringing about violence and such.

The Huffington Post: “The tweet links to an Air Force Times story entitled ‘Air Force A-10s called in to hold off Taliban attack on major Afghan city,’ effectively ruining what had been a fun and violence-free moment in internet history.”

Vox: “It’s obviously not bad that the US military is fighting the Taliban or even promoting military operations against the group. But it’s not in good taste to make light of war using a meme, no matter the situation.”

The Washington Post: “The background of the battle in Farah is stark. The Taliban has launched several attacks in the city in western Afghanistan in the past few days, prompting the United States to launch airstrikes as Afghan forces fight to hold ground. The Taliban has claimed that it has taken control of the city, but the U.S. and Afghan governments deny that is true.”

Splinter: “Brands thirsty to turn the latest fad in digital culture into good PR or new revenue, not so much. Brands that are actually bloodthirsty arms of government, really not so much”

After covering the Department of Defense for Task & Purpose for the last year, my reaction to this reaction is: This is the Air Force news you care about that really gets you pissed?

If I’ve learned anything in the last year, it’s that violence is an inescapable part of military service. There’s a reason why dark humor and warfighting go hand-in-hand; how else do you reconcile the realities of modern warfare with your own humanity? Yeah, the Air Force joke was in bad taste, but pearl-clutching over an ill-advised attempt to translate that dark humor to a broader context misses the point.

Bottom line: This was a dumb mistake, but if an ill-advised tweet is what it takes to get you invested in the workings of the U.S. armed forces, you’ve got bigger problems. I would love to see a similarly indignant reaction to the dozens of service members killed in training accidents in the last year — whose numbers outstrip those killed in combat. I won’t.