To get the American taxpayer amped up about the exciting future of aerial warfare, the Air Force decided to emulate... 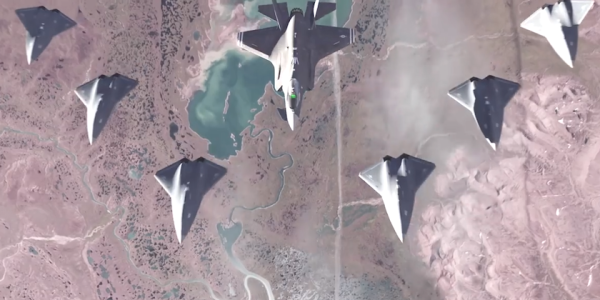 To get the American taxpayer amped up about the exciting future of aerial warfare, the Air Force decided to emulate one of the biggest box office bombs in movie history: Stealth, the over-the-top 2005 military sci-fi flick starring Jessica Biel, Josh Lucas, and Jamie Foxx.

The Air Force Research Laboratory (AFRL) dropped a delightful sizzle reel on YouTube in March as a “call to action” for engineers and technologists to take part in the service’s ambitious Air Force 2030 plan, which modernizes upgrades the service’s aircraft with the latest high technology. But nestled in all the video’s faffing about how the branch wants “to be the sponsor of choice for research scientists,” there’s this money shot: a slick animation of a fighter pilot ordering around a bunch of drone wingmen.

Boy, that's some neat visual effects work —but the future of aerial warfare sure does look *just like* the 2005 cinematic disaster:

Stealth, which chronicles the disastrous introduction of artificial intelligence to replace three Navy pilots who operate the fictional F/A-37 Talon, may be a bad inspiration for a future force. It lost $96 fucking million at the box office, the rough equivalent of one F-35 aircraft. Given the Department of Defense's major cost overruns for next-generation aircraft, this is a delightful little oversight.

It’s also a bit of a shame. Stealth worked closely with the Navy to shoot scenes aboard the USS Abraham Lincoln and director Rob Cohen made a big fat fucking stink about how much of an honor it was to shoot aboard the carrier. “This is real life out here,” he said back in 2004, “and it's amazing that the Navy is allowing us to be here and bring our own aircraft on the ship.”

Well, you did a shit job, Rob, because the theatergoing public thinks your vision of futuristic dogfights was stillborn. I mean Christ, just look at the trailer for this garbage fire:

While the Navy has since learned some lessons about how to sell a service-focused movie — 2012’s Battleship, which is basically just two hours of Rihanna yelling, made millions — the Air Force clearly has not.

So here’s a pro tip: If you want to publish a “call to action,” focus on people and not machines.