Journalist Ezra Klein thinks America isn't at war. A lot of people on the internet (and the staff of Task... 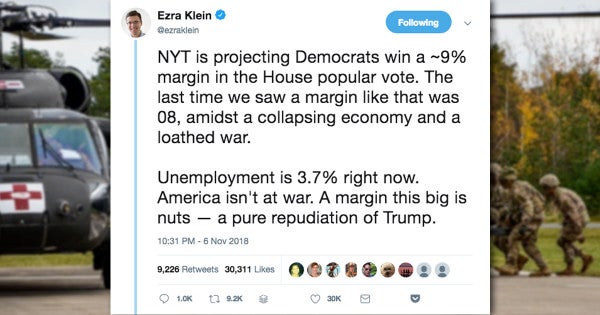 Journalist Ezra Klein thinks America isn't at war. A lot of people on the internet (and the staff of Task & Purpose) disagree.

Klein, the founder and editor-at-large for Vox.com, made the claim in a tweet about the mid term election on Tuesday, opining on why the Democrats took the House of Representatives. Comparing 2018 to 2008 — when Democrats took power amid a war in Iraq and Afghanistan — Klein argued that the Tuesday election was a “pure repudiation” of Trump, since unemployment was so low and America was no longer at war.

The only problem, of course, is that America is still at war in the same places it was in 2008, in Iraq and Afghanistan — albeit with a smaller footprint. And U.S. troops are still fighting and dying there: On the same day as Klein's tweet, the remains of Army Maj. Brent Taylor touched down at Dover Air Force Base in Delaware; he was killed Saturday in Afghanistan, leaving behind a wife and seven children.

And since 2008, the U.S. military has become involved in more places, carrying out airstrikes and engaging in firefights with militants in places like Somalia, Mali, and Tunisia. Then there was a battle with ISIS militants in Niger in October 2017, where four Americans were killed in the most deadly incident for U.S. troops in Africa since the 1993 “Black Hawk Down” incident.

Technically, Congress hasn't “declared war” and America is not in a state of war. But it certainly feels like war to the U.S. troops getting shot at in Syria or in Afghanistan. Indeed, when Vox itself describes what's happening in Afghanistan these days, the war is described as “America's longest war” — an accurate assessment for a conflict that continues 17 years and one month after the invasion that kicked it off.

Which is probably why Klein got dragged up and down the Twitter-sphere by soldiers, national security journalists, and everyone in between.

"America isn't at war," he said. That'd be news, if it was anywhere near true. https://t.co/Ie1uelZj0b

Whoa, dude, “America isn’t at war.” Really? That’s huge breaking news. Maybe take a glance or two at @starsandstripes in the near future. And @NYTimesAtWar and a dozen or so other publications that are damn well aware that the United States remains very much at war.

We are at war, dude.

How is America *not at war*?