On Thursday, Rep. Brian Mast (R-Fla.) shared this fantastic photo of himself with Purple Heart recipients veterans Jim Baird and Dan Crenshaw during their swearing-in ceremony at the start of the 116th Congress 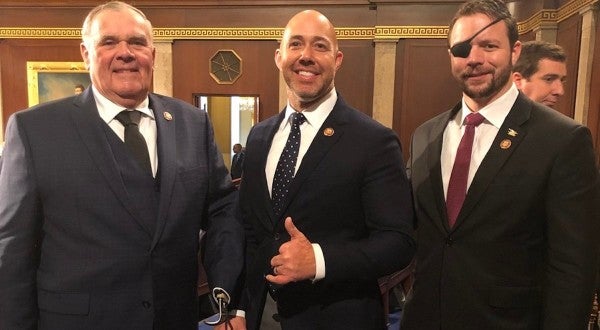 What do you get when you bring three Purple Heart recipients together on the floor of Congress? One awesome f*cking photo.

On Thursday, Rep. Brian Mast (R-Fla.) shared this fantastic photo of himself with fellow wounded veterans Jim Baird and Dan Crenshaw during their swearing-in at the start of the 116th Congress.

Baird, recently elected to represent Indiana's 4th congressional district, lost his left arm while serving in the Army during the Vietnam War, while Crenshaw, a Navy SEAL veteran, lost his right eye to an IED blast in Afghanistan in 2012. Mast himself lost both legs to an Afghan IED in 2010.

“5 eyes. 5 arms. 4 legs. All American,” Mast, who has served in Congress since January 2017, wrote of his fellow Republicans and incoming freshman congressman. “Welcome to Congress, @ElectJimBaird and @DanCrenshawTX.”

According to Military.com, all three of the men are Bronze Star recipients as well.