"The White House nominated him for rear admiral upper half (2-star) and re-submitted the nomination to the 116th Congress in Jan. 2019." 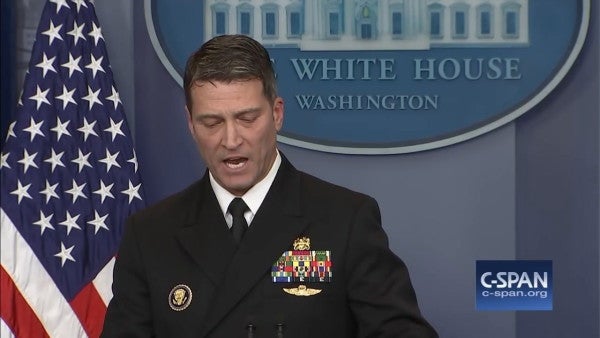 Remember Navy Rear Adm. Ronny Jackson? He was President Donald Trump's doctor who said the president had “great genes” and was later nominated to lead the Department of Veterans Affairs, although he withdrew his nomination in April 2018 over allegations that he overprescribed certain drugs and created a hostile working environment.

Well, he's up for his second star while still being investigated by the Defense Department Inspector General's Office, officials said on Friday.

“In accordance with Article II Section 2 of the constitution, Rear Adm. Jackson was appointed by the Office of the President to his current rank of Rear Admiral (lower half/1-star) on Oct. 1, 2016,” a Navy official told Task & Purpose on condition of anonymity.

“Although promotion boards are typically used to recommend officers for presidential appointment to the grade of rear admiral, the Constitution does not require that a board be used. In this case, the president made the appointment to rear admiral (lower half) without the use of a promotion board recommendation. The White House nominated him for rear admiral upper half (2-star) and re-submitted the nomination to the 116th Congress in Jan. 2019.”

On Saturday, the White House announced that Jackson would serve as assistant to the president and chief medical advisor.

“The president had to re-nominate many individuals because the Senate did not take action during the last Congress, including on Admiral Jackson,” an administration official told Task & Purpose on Saturday. “President Trump, like former Presidents George W. Bush and Barack Obama view Dr. Jackson as a trustworthy medical advisor and excellent physician.”

Jackson's nomination was sent over to the Senate Armed Services Committee on Jan. 15, though it has not moved any closer to a vote.

In June 2018, an inspector general's office spokesman confirmed to the Washington Post that it was looking into Jackson's conduct, but he declined to say at the time exactly what investigators were examining.

UPDATE: This story was updated on Feb. 3 with comments from an administration official.

SEE ALSO: Ronny Jackson Was Allegedly Known As 'Candy Man' For Doling Out Prescriptions. He'll Fit Right In At The VA