"The Army regrets the inappropriate post on Instagram related to the COVID19 response and the individual who posted it has been relieved." 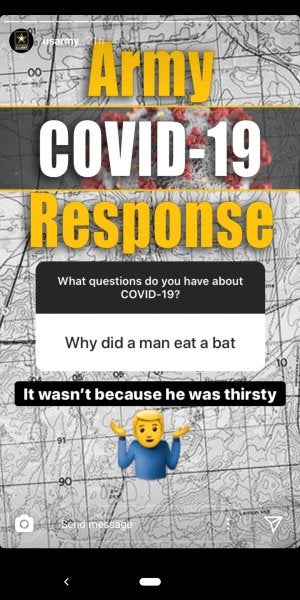 Gather 'round all ye social media folk, for a cautionary tale about posting dumb shit.

On Saturday, the Army fired a social media manager over an Instagram post relating to the novel coronavirus (COVID-19).

The post that appears to have been the one to bring down the wrath of higher-ups was answering a question, “Why did a man eat a bat” — seeming to refer to the theory that the virus originated from someone eating a coronavirus-infected bat in China, which hasn't been verified.

“It wasn't because he was thirsty,” the Army's response said, including an emoji of a man shrugging.

The post was immediately criticized on social media for being inappropriate, with Sen. Tammy Duckworth (D-Ill.), an Army veteran, calling it “simply unacceptable.”

“We do not know how #COVID19 first infected humans but racism has no place in our Armed Forces,” she tweeted. “I'll be calling @SecArmy to find out how this happened.”

According to Military Times, the post was up “for several hours before being deleted.”

As of Sunday, according to Johns Hopkins University, more 320,000 people around the world have contracted the disease — and more than 13,700 people have died.

The post was part of a series of posts that answered questions about the virus — appearing to make light of the circumstances.

“What's the biggest threat that covid-19 poses?” one question said.

“Death,” the Army responded, with a thinking emoji.

Another post provided false information, saying children cannot get the virus. (They can.)

“The Army regrets the inappropriate post on Instagram related to the COVID19 response and the individual who posted it has been relieved,” the Army posted on Instagram shortly afterwards.

“The post has been removed and we are taking action to ensure this doesn't happen again, including retraining for our social media personnel.”