Tell us your good, bad, and horribly painful stories about military dental procedures

'I'm sure the sadistic bastard still has that tooth as a trophy on a shelf somewhere.' 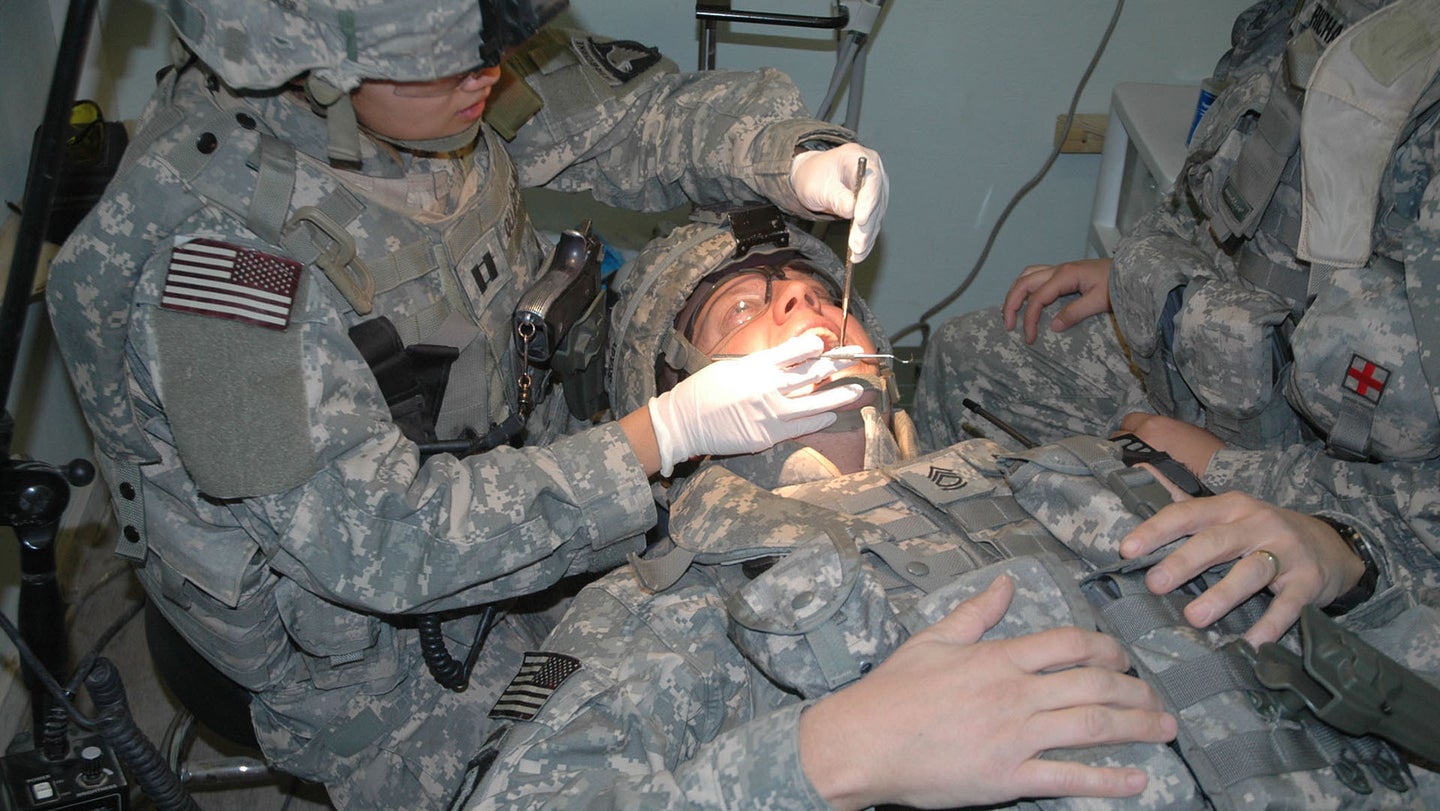 The easiest way to find out if people have ever served in the armed forces is to ask them to open their mouths: If you see a bunch of metal fillings and other dental work that uses Civil War technology, you know that person has been treated by a military dentist.

While military medicine has made great advances in treating concussions, traumatic brain injuries, and other signature wounds from the past 20 years of war, military dentistry remains stuck in a time somewhere around the age of “Dances with Wolves,” or so the laundry list of prior-service critics would say.

We’re not saying that all military dentists are bad, but an unscientific poll of veterans who are now affiliated with Task & Purpose revealed that more than a few service members have gone through hair-raising situations in dental chairs that can rival combat experiences. (All of these veterans served in the Marine Corps because Marines are over-represented in both traditional and social media.)

Scott Murdock, a former Marine first lieutenant, was once treated by a Navy dentist who told him he had a cavity that needed to be filled immediately. But the tooth proved to be so hard that the dentist needed to switch to a more powerful drill during the lengthy procedure.

When he was subsequently seen by a different dentist, his X-rays indicated that he never had a cavity in the first place, said Murdock, a contributor to Task & Purpose’s Gear section.

“I would rather break my own knees with a hammer than go to another Navy dentist,” Murdock said.

Many of the stories collected as part of this cursory (and unscientific) poll of veterans on staff indicates that anyone thinking of joining the military should have their wisdom teeth taken out by a civilian dentist before they ship to boot camp.

Task & Purpose’s deputy editor James Clark, a former Marine corporal, remembers having to run the Confidence Course during boot camp, the day after getting two of his wisdom teeth removed, even though his mouth was grotesquely swollen. Normally, recruits would be given light duty after having such a procedure, but Clark fell victim to bad timing.

“I do distinctly remember getting stopped by a drill instructor in the middle of the training event, who asked me, with a mix of concern and anger, ‘What the hell is wrong with your face, recruit!?’” Clark recalled. “By that time my neck and jaw had swollen up and it probably looked like I was choking on a grapefruit I’d eaten whole.”

Anecdotes are not data, however they do show how horror stories about dental appointments are as prevalent as war stories in the military.

Former Staff Sgt. Kyle Gunn once encountered a dentist at Camp Pendleton, California, who jumped at the opportunity to remove an impacted wisdom tooth. The dentist gave Gunn a local anesthetic, but either he did not wait for it to take effect, or the shot simply didn’t work because Gunn was far from numb as the dentist went to work.

“He started cutting away with reckless abandon and as the blood and pain started to pool in my mouth, I could only lay helpless and wait for it all to end,” recalled Gunn, who is now social media editor for Task & Purpose and The War Zone. “My mouth bled for most of the day, and I couldn’t chew anything on that side for a few days. I’m sure the sadistic bastard still has that tooth as a trophy on a shelf somewhere.”

Former Marine Cpl. Scott Whisler also received a local anesthetic when his wisdom teeth were removed, but unlike Gunn, the shot actually worked for him.

Whisler, a contributor to Task & Purpose’s Gear section, said he was told he could not receive general anesthesia, which would have allowed him to sleep during the procedure, because that would have required sending him to Bremerton, and “they were not sending Marines to other sites to get dental procedures.”

But soon afterward, Whisler came across another Marine who also had his wisdom teeth removed.

“When I asked him how he liked the local injection, he told me that he had been asleep for his procedure,” Whisler said. “Baffled, I asked how that was possible, to which he informed me that he had been sent to another site so they could put him under. To add insult to injury, this other Marine’s recovery was a whole week faster than mine.”

Not all military dentist stories are horrific. Daniel Terrill, a former Marine corporal, said he was given plenty of Novocain when his four wisdom teeth were removed during boot camp. As a result, he was not in any pain or discomfort during the procedure.

“They gave me painkillers,” said Terrill, Task & Purpose’s commerce editor, “But one of the other recruits stole them during lights out.”

We want to hear about your most memorable experiences with military dentists – good, bad, and everything in between. E-mail reporter Jeff Schogol at schogol@taskandpurpose.com with your military dentistry tales, which could be used in a follow-up story.