Navy minesweeper damaged after fire breaks out while docked in Bahrain

The Navy is still determining the extent of the damage to the ship caused by the fire. 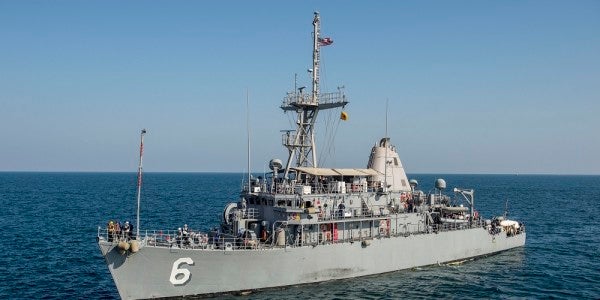 No sailors were injured when a fire broke out aboard the minesweeper USS Devastator on Thursday, according to 5th Fleet.

The ship was docked at Naval Support Activity Bahrain when the fire broke out about 8 p.m. local time, a 5th Fleet news release says. Sailors from four other ships and the base fire department were able to extinguish the blaze within an hour.

While the extent of the damage caused by the fire is still being determined, the Devastator is able to float on its own, the vessel did not take on any water, and its hull has not been compromised, 5th Fleet spokeswoman Lt. Chloe Morgan told Task & Purpose on Saturday.

“It's a never a great day when a ship catches on fire, but if there is anything good to be said about this, there was a lot teamwork,” Morgan said. “Everyone reacted very quickly. You have to remember this happened on a Thursday night in Bahrain. That's like a Friday night back in America, so there's not a lot of people there except those who are on duty. Well everyone pulled together. The pier was full of people all there to assist. Even the fire department helped refill air tanks.”

The Devastator is one of four minesweepers permanently stationed in Bahrain, she said. The other ships are the USS Sentry, Gladiator and Dextrous. Each mine sweeper has a crew of up to 88 sailors.