'That’s when I went from not good to worse' 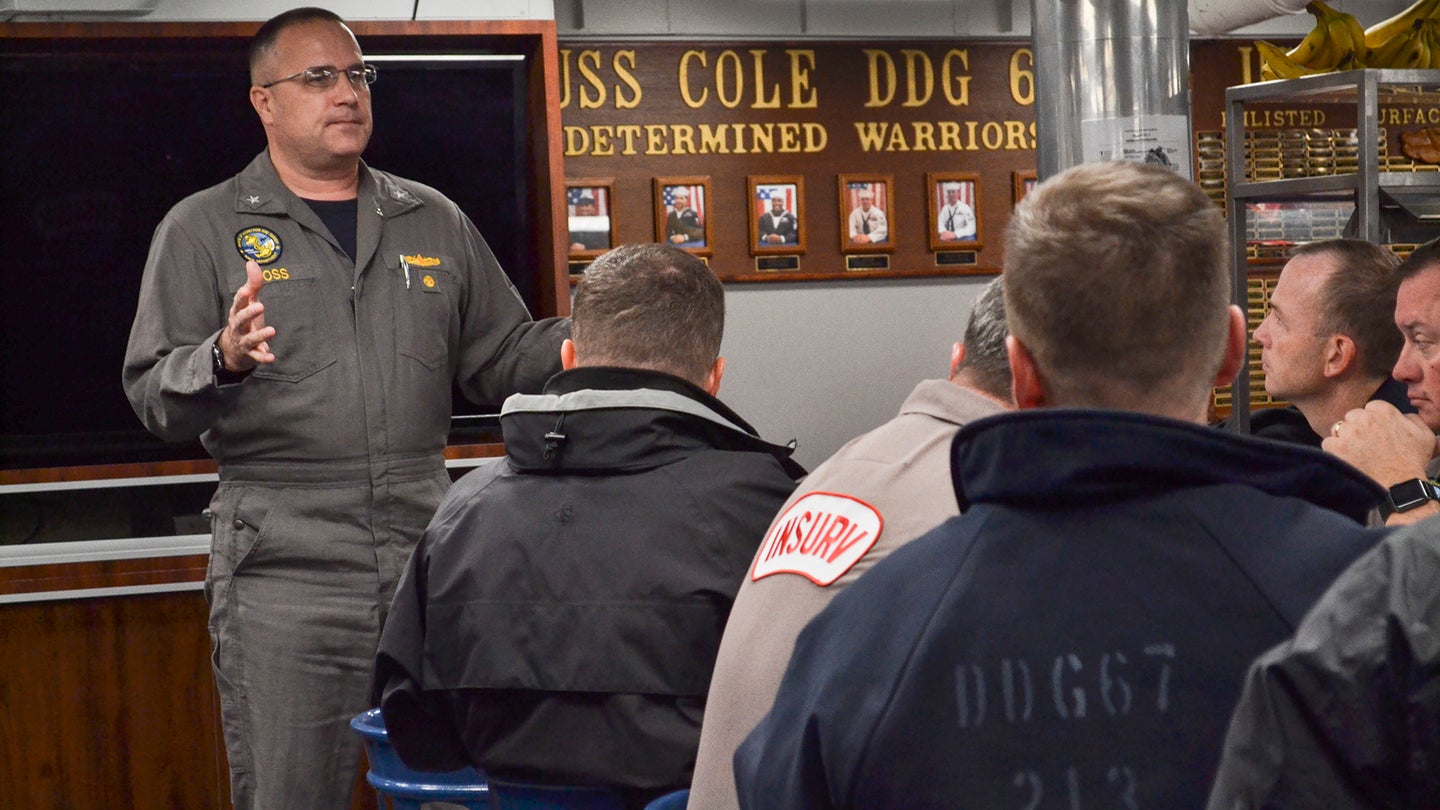 Navy Rear Adm. Erik Ross was naked and standing in his own filth in a Tennessee hotel when security officers found him.

The one-star commander of Expeditionary Strike Group Two had drunk two beers and three glasses of bourbon several hours earlier, a preliminary inquiry into the incident found. His Blood Alcohol Content was tested at 0.14 percent, nearly twice the legal limit in Tennessee.

Ross told security personnel he thought he had sleepwalked out of his room and left his key card behind. But it is possible that under the influence of alcohol and fatigue, Ross thought he was in his bathroom when he relieved himself in the foyer, according to a redacted copy of the inquiry, which Task & Purpose obtained through a Freedom of Information Act request.

Even though security personnel told Ross that he was too intoxicated to drive, he decided to return his rental car to the airport less than two hours later, the inquiry found.

He was fired less than a week later. Now retired, Ross said he is deeply remorseful for how he embarrassed his chain of command, the Navy, his friends, and his family.

“Today, I volunteer my time sharing my story with senior leaders who are about to command ships, submarines, large installations and more,” Ross said. “In doing so, I hope that I am able to provide perspective, and share what I would do differently regarding stress and alcohol. My hope is that my story will prevent one or more officers from derailing their careers.”

On the night of Sept. 20, 2019, Ross had just finished taking part in two selection boards in Millington, Tennessee, when he and other board members decided to celebrate in their hotel. Ross brought a bottle of bourbon with him, according to the inquiry.

“That was my first mistake — should have just gone to sleep,” Ross later told the preliminary inquiry officer, whose name was redacted from the report. “I was exhausted. I had a cold earlier in the week, but that wasn’t an excuse for what I ended up ultimately doing. I was exhausted though.”

One of the officers who responded noted the overwhelming stench of human excrement as he approached Ross, leading him to believe that the admiral had defecated in or near the stairwell.

Ross told security officers that he must have sleepwalked out of his room by accident, although he had not had a sleepwalking incident in a long time. He also said he did not know he had taken his clothes off in the foyer outside of his room.

The admiral also said he was tired and stressed, but although he had drunk bourbon and beer, he did not think he was intoxicated at the time, according to the inquiry.

Speaking to the preliminary inquiry officer later, Ross said that he had issues with sleepwalking as a child but the last time he remembered doing so was in college. He also said he thought he thought he had woken up and opened the wrong door while looking for the bathroom, leaving him locked outside.

“That’s when I went from not good to worse,” Ross said. “And then somewhere through the middle of the night, I woke up having been sleepwalking outside the door and I couldn’t get back in. So I started pounding on some doors and then eventually the police came and took me back into the room. Helped me get dressed and took me over to the precinct.”

Ross acknowledged that he was warned more than once that if he tried driving in his condition, he would risk injuring or killing himself and others. But after getting about 30 minutes of sleep, he made his “second major judgment error” by deciding to return the pickup truck that he had rented.

“All I could think about was that I wanted to get out of there go home and go see my wife,” Ross told the preliminary inquiry officer. “And I know that wasn’t the responsible thing to do but then that’s what I did.”

The exact time that Ross left the hotel is unclear, but since he likely stopped at a gas station on the way to the airport to fill up, it is possible he got on the road about 11 a.m., according to the inquiry.

“Considering that less than 2 hrs. had gone by since the BAC reading of 0.14 at 0920, RADML Ross was likely above the Tennessee legal limit for BAC of 0.08 during the drive to the airport,” the inquiry found.

In the meantime, another flag officer had been asked to check on Ross to see how he was doing, according to the inquiry.

The fellow rear admiral, whose name was redacted from the report, noted that “suicide was a concern.” The rear admiral found that Ross’ hotel room was empty. When he reached Ross by phone, Ross admitted he was driving to the airport.

“He agreed that he probably should not be driving but he was confident he would make it there without incident,” the rear admiral said later. “He mentioned that he thought he had an alcohol problem and wanted help.”

When Ross recalled the incident during his Oct. 2, 2019 interview with the preliminary inquiry officer, he acknowledged that he should have either canceled his flight or asked someone to drive him to the airport.

“I made a judgment call that wasn’t a good one,” Ross said. “Luckily, I didn’t kill anybody but it wasn’t the right call to make and I understand that.”

The inquiry found that Ross had violated Articles 133 and 134 of the Uniform Code of Military Justice: Conduct unbecoming an officer and a gentleman, acting prejudicial to good order and discipline, and bringing discredit on himself and the Navy.

Ross was taken to admiral’s mast by the commander of 2nd Fleet and given a punitive letter of reprimand for violating Article 133, said Capt. Sarah Self-Kyler, a spokeswoman for Fleet Forces Command. Ross later submitted his resignation and retired on Aug. 31, 2020.

When Task & Purpose asked Ross whether he believes that he received preferential treatment and was allowed to retire because of his rank as a flag officer, he declined to answer.

Looking back, he made no excuses for his actions, saying he immediately accepted full responsibility and cooperated with the Navy’s investigating officer.

“The Navy’s standards are high, and leadership was right to hold me accountable,” Ross said. “I’ve had a lot of time to reflect on what I did to lose the Navy’s confidence in me, and it has become my charge to ensure future generations may learn from my mistakes.”

For Ross, the loss of his career was a turning point in his life because it forced him to finally recognize that he had missed the warning signs of his alcohol problem.

“Two days after the incident, I self-referred for my alcohol use,” Ross said. “I worked with a specialist who diagnosed me with an alcohol disorder and recommended I complete a six-week Intensive Outpatient Program (IOP). After successful completion, I signed a 12-month continuing care contract, I attend AA meetings regularly, and I have worked the steps with my sponsor.”

“I have been sober for 585 days,” he continued. “I know alcoholism is a serious medical condition and that remaining sober will be a life-long challenge. I am committed to that challenge … For me, my family, and our future grandchildren.”