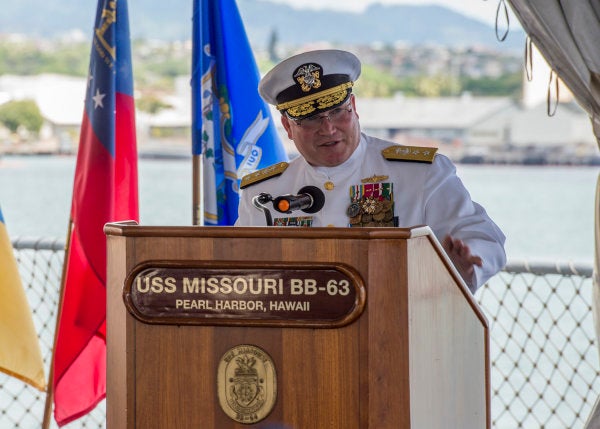 Mark Montgomery — a retired Navy Rear Adm. who was censured by Navy Secretary Richard Spencer for his involvement in the “Fat Leonard” scandal — will soon be named the executive director of the Cyberspace Solarium Commission, Task & Purpose has learned.

Montgomery, who previously worked as a policy director on the Senate Armed Services Committee after his retirement from the Navy, told Task & Purpose he had not been hired yet, but it was the commission's intention to bring him on board. He was spotted on Monday at a commission meeting at the Hart Senate Building, and a source familiar with the matter said “that's true” when asked whether he would be in the top spot.

“Senator King and Representative Gallagher took a long look at Admiral Montgomery in full and saw the same qualities that led Senator John McCain to bring him onto the Armed Services Committee: a hardworking, smart, veteran who is capable of managing the day-to-day operations of an incredibly important commission to set the nation's cyber doctrine,” Felling said in a statement. “Although Admiral Montgomery was censured by the Navy, King and Gallagher spent a lot of time and thought on his candidacy, determining he was the right professional for this important job — a determination that has been validated by Montgomery's work ethic and commitment in this initial phase.”

“I believe in this issue,” Montgomery said of the CSC. “And I believe this commission is one of the ways to solve a significant strategic challenge, so I was excited and willing to work on it for the chairman.”

President Donald Trump nominated Montgomery to oversee the U.S. Agency for International Development in June 2018, but his name was withdrawn from consideration shortly before the censure's announcement.

In the censure letter, Montgomery was accused of accepting gifts from Leonard Francis, known colloquially as “Fat Leonard,” the President of Singapore-based Glenn Defense Marine Asia (GDMA), while Montgomery was in command of Destroyer Squadron 15 in Japan from 2007 to 2009. He also was found to have “improperly endorsed, provided information to, and took action to benefit GDMA.”

“Your actions have cast a shadow over the reputation of all the outstanding men and women who served during your tenure in command,” Spencer wrote. “[You] abused your position to accept gifts from Mr. Francis/GDMA, improperly endorse GDMA, and commit graft. Finally, rather than accept responsibility for your actions, you chose to submit a false official statement regarding your conduct.”

Montgomery disputed the conclusion of the censure letter to Task & Purpose. He said it “was based on implication of inappropriate support to [Francis] which was in fact non-existent, and therefore the letter of censure was inappropriate. I should have been treated like the vast majority of officers in this process.”

Montgomery wrote a letter of rebuttal to the censure letter, requesting that the censure be removed from his record, which Spencer declined, Navy spokesperson Capt. Greg Hicks told Task & Purpose.

“[Despite] RADM (Ret.) Montgomery's assertions to the contrary, he was afforded all due process and treated no differently than any other individual subject to a [Secretarial letter of censure],” Hicks said. “RADM (ret.) Montgomery's rebuttal, which refuses to accept full responsibility for his actions, only serves to reinforce the Secretary's findings in the SLOC.”

Montgomery will be at the helm of a 14-member Cyberspace Solarium Commission (CSC), established under direction from the 2019 National Defense Authorization Act, which is chaired by Sen. Angus King (I-Maine) and Rep. Mike Gallagher (R-Wis.).

Per the release, the CSC “draws its membership from Congress, top officials at federal agencies, and civilians – a mixture of voices that will allow the Commission to comprehensively understand the scope of the challenge and the resources available.”

The commission “will work to develop a consensus on a strategic approach to protecting the crucial advantages of the United States in cyberspace,” according to a press release from Sasse. By September 1, 2019, the commission plans to submit a report on cyber strategies, recommended allocation of resources in the cyber field, and more, to the congressional defense committees, Defense Secretary, and Directors of Homeland Security and National Intelligence.