The president of the U.S. Naval War College is under investigation for excessive spending and inappropriate behavior that included college-wide offers of Twister games in the office where kept a working margarita machine 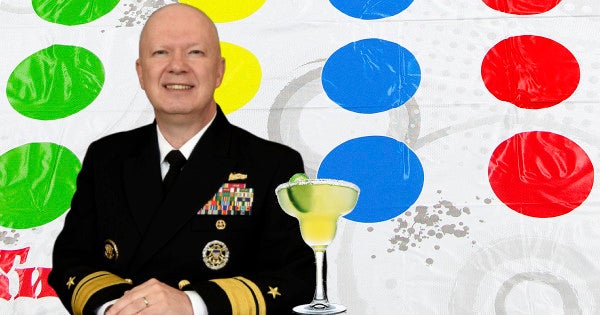 The president of the U.S. Naval War College is under investigation for alleged excessive spending and inappropriate behavior that included college-wide offers of Twister games in the office where he kept a working margarita machine.

According to documents and emails obtained by the Associated Press, Rear Adm. Jeffrey Harley's three years as president have been defined by spending on hundreds of thousands on raises amid eye-popping budget shortfalls and punctuated by frequent drinking on the job and a series of emails to hundreds of students and faculty that included offers of “free hugs.”

In an April 2018 complaint to the Office of the Naval Inspector General, employees portrayed Harley as a heavy drinker whose office margarita machine would often float around campus “to suit his mood,” appearing in public dining areas and among other college leaders.

“He invited members of the staff to his office for afternoon drinks, setting his employees up to either comply because he's the boss or uncomfortably decline his offer because they do not want to drink during the workday,” the complaint alleged.

Harley also allegedly set emails offering “free hugs” and games of Twister (a game Harley denied even owning), casting the college in an uncomfortable light, leaving staff, “wondering how Harley was spending his time and school resources,” according to the Associated Press.

Indeed, the Associated Press reports that under Harley's purview, the college spent roughly $725,000 on raises annually while enduring an annual budget shortfall of $5 million, raises that several employees claim Harley “appeared to grant unilaterally to some faculty, rather than consulting the college's other senior leaders, as is customary.”

“The employees also complained that Harley had hired unqualified people to high-paying jobs, sometimes exploiting a federal rule meant to allow colleges to quickly hire qualified professors,” according to the Associated Press. “They questioned Harley's spending of tens of thousands of dollars on certain contractors and others, who they said brought little benefit to the college.”

In response to the allegations, Harley told the Associated Press that those emails merely reflected his “lighthearted leadership style,” calling himself a “quirky” leader who “tries to use humor to break the tension in what can be a high-pressure environment.”

That's not totally unbelievable: Consider the May 12 email Harley sent regarding his official college portrait and accompanying label stating that “he preferred cats, Star Trek, red wine, baseball and was positively obsessed with achieving the perfect hair day” (Harley is bald and said the painting was given to him as a joke).

But other college employees don't see it that way. The April complaint alleges that “his destructive and ethically challenged leadership style is destroying the college” and Navy investigators need to remove Harley as soon as possible.

“The drinking continues. Morale is at an all-time low,” employees wrote in follow-up complaint to the IG in January. “Your biggest concern should be, however, the financial situation at the college.”

WATCH NEXT: Mattis Needs A Drink