'What kind of leader would I be if I saw something that violated our values and standard of conduct and walked past it?' 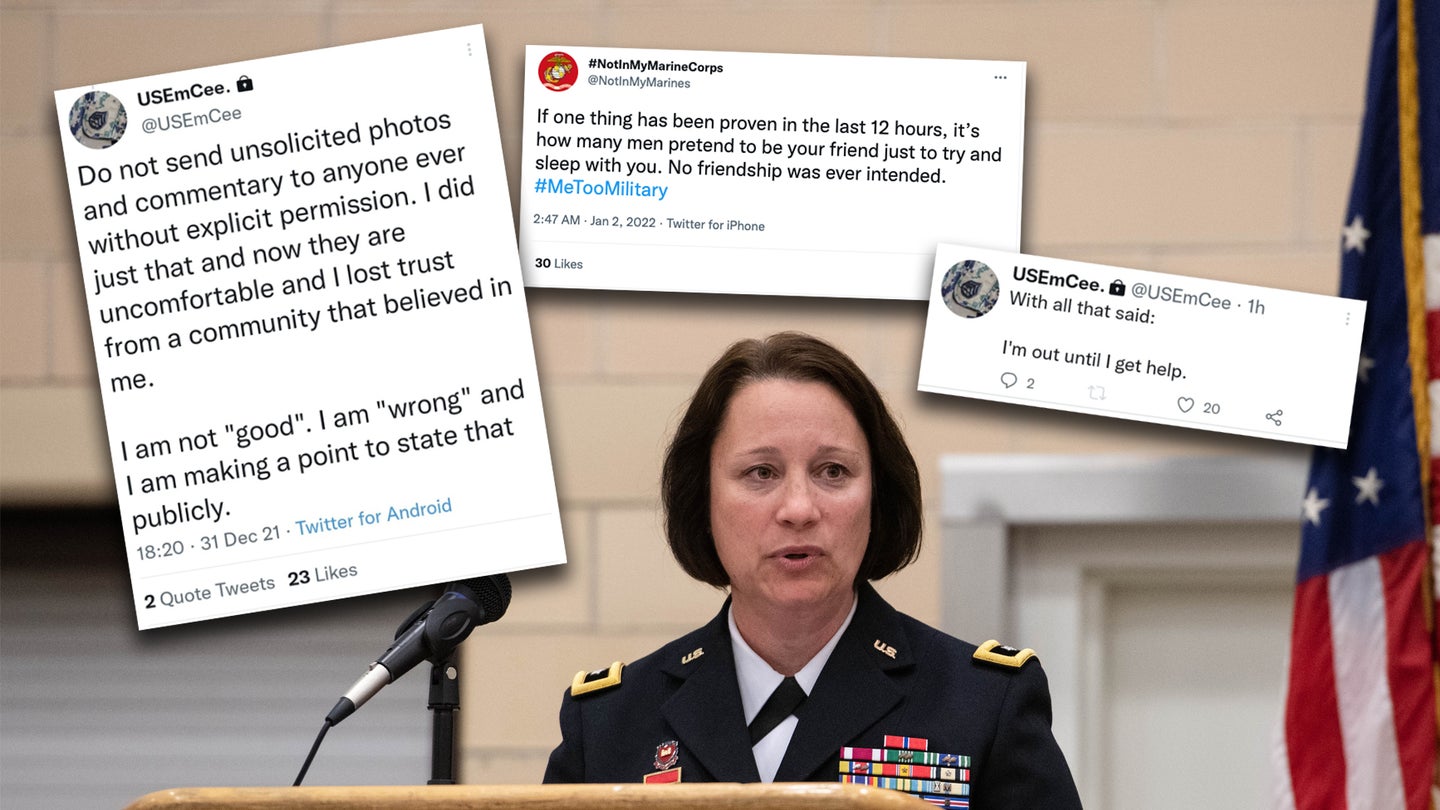 A U.S. Army general personally intervened on Saturday after a Marine was recently accused of sexually harassing several women online.

When Army Maj. Gen. Johanna Clyborne saw several people on Twitter saying a Marine sent them sexually explicit and inappropriate pictures and messages, she decided to step in and asked for people to contact her if they knew the Marine’s name.

It’s not every day that a two-star general gets involved when service members say they are being harassed on social media, but Clyborne said she did not feel that what she did was unusual. She noted that Sgt. Maj. of the Army Michael A. Grinston will often ask people to private message him when he sees people talk on social media about problems they are facing.

“We teach our service members from Day 1 – from the most junior person in our organization to the most senior – that if you see something, say something,” Clyborne told Task & Purpose. “We are responsible for each other’s dignity and respect and safety. And what kind of leader would I be if I saw something that violated our values and standard of conduct and walked past it?”

Clyborne said this is the first time that she has used social media to provide a command with information about possible misconduct. She declined to identify the Marine or his unit to avoid the perception that she was influencing any actions his chain of command might take.

“I have not asked them what they intend to do with it,” Clyborne said. “We don’t need two-stars calling the lowest level of local command. But they are aware of it and I assume they will take the appropriate action.”

The Twitter user @USEmCee was well known to the military community on Twitter before the allegations surfaced. Since then, the @USEmCee Twitter handle has been deleted. On Dec. 31, @USEmCee tweeted a cryptic apology but did not specify exactly what he had done.

“Do not send unsolicited photos and commentary to anyone ever without explicit permission,” he tweeted, according to a screenshot taken by another user. “I did just that and now they are uncomfortable and I lost trust from a community that believed in me.”

He added later: “With all that said: I’m out until I get help.”

Task & Purpose spoke with two women who said @USEmCee had harassed them on social media. They said he had identified himself as a Marine. Task & Purpose is withholding this person’s name because no military officials would confirm his name.

After several people sent Clyborne direct messages with information about the person who went by the Twitter handle @USEmCee, she had a member of her team report him to his chain of command, said Clyborne, who serves both as the Assistant Adjutant General for the Minnesota National Guard and as the Deputy Commanding General-Army National Guard for the United States Army Cyber Center of Excellence at Fort Gordon, Georgia.

Military officials declined repeated requests from Task & Purpose to identify the person whom Clyborne had reported.

Capt. Samuel Stephenson, a spokesman for Training and Education Command, has confirmed that a Marine is being investigated in connection with the allegations of harassment relayed by Clyborne. No information about the Marine was immediately available, Stephenson said.

One woman who works as a government employee told Task & Purpose that @USEmCee allegedly manipulated her online, asked her several times to get “black out drunk” with him, and eventually sent her a graphic sexual image.

The woman, who spoke on condition of anonymity to protect her career, said that @USEmCee introduced himself in a direct message after she tweeted about being discriminated against. He initially offered her advice about how to file a report, but quickly focused their subsequent conversations on sexual innuendo, she said.

Then on Dec. 30, he allegedly sent her an unsolicited picture of his penis with a lurid caption on Snapchat, the woman said. She provided Task & Purpose with a screenshot of a message in which @UsEmCee admitted to sending the picture, claiming he was trying to make her laugh.

The woman was one of several who have come forward in recent days to allege that @USEmCee had sent them inappropriate images and messages. A female military officer shared with Task & Purpose a 2020 message that @USEmCee sent her asking her out on a date while she was in college on a Reserve Officers Training Corps scholarship. The military frowns upon relationships between enlisted servicemembers and officers as potential fraternization that is detrimental to good order and discipline.

Yet the officer, who asked not to be identified, said @USEmCee would repeatedly make any conversation with her sexual in nature. She also noted that she was 20 years old at the time and he was roughly 10 years older than her.

It is common for powerful and older men in the military to attempt to manipulate vulnerable women in order to gain their trust and ultimately have a sexual relationship, said former Marine Sgt. Erin Kirk, co-founder of the advocacy group Not In My Marine Corps.

Several women have sent the advocacy group pictures and messages purportedly from @USEmCee that meet the threshold of sexual harassment, including multiple unsolicited pictures of penis, Kirk said.

Got a tip about this story or any others? Email schogol@taskandpurpose.com