Few figures are more reviled in the military than “Jody,” the man or woman who’s making moves on your significant... 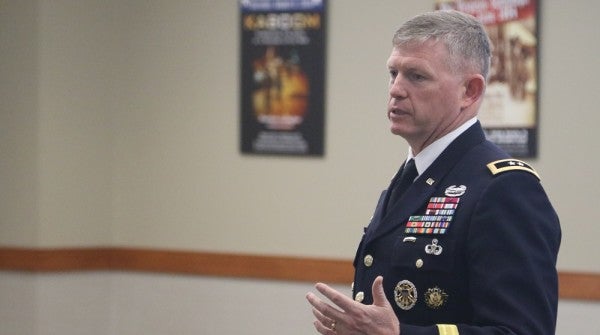 Few figures are more reviled in the military than “Jody,” the man or woman who’s making moves on your significant other. But perhaps the only thing worse than finding out Jody is your neighbor is the revelation that he’s your commanding officer — and a two-star general, to boot.

The Army Inspector General has launched an investigation into an inappropriate relationship between Maj. Gen. Joseph Harrington, who oversees U.S. Army Africa from Northern Italy, and a subordinate’s wife, USA Today reported on Aug. 31.

According the report, the relationship between Harrington, who is married, and the woman, who remained anonymous due to concerns over retaliation against her husband, began after she met the general at the gym. The woman started receiving the texts in the spring, but grew concerned after they became suggestive, she told USA Today; though adultery is a violation of military law, she claimed that the exchanges occurred via text and the relationship did not become physical.

The messages, sent mostly late at night, ranged from mildly flirtatious to sexually suggestive, though let’s be honest: a married senior officer sending a subordinate's wife personal texts is inappropriate almost any way you cut it, and doubly so when they read like this: “You seem to have a great modeling resume! Truly! Though I hadn’t noticed! Where is your hubby tonight? Work?”

After the woman replied that she and her husband had argued and he was in bed, Harrington texted back: “I’m sorry! Make up se…x is fun.”

Investigators are particularly concerned about messages which may indicate Harrington was aware the exchange was inappropriate, USA Today reports, and Harrington’s request that the woman delete his messages seems to imply he knew the relationship crossed the line.

“I don’t think your husband would be happy if he knew you chatted with another man,” Harrington wrote in a text to the woman. Another read: “I hope u delete this exchange!” Adding later: “Why not delete after communicating?”

The scandal is the latest in a string of incidents involving senior ranking military officers who engaged in inappropriate relationships. There’s Army Maj. Gen. David Haight, dubbed the “swinging general” who lost his job and was demoted three ranks to lieutenant colonel when an 11-year affair with a government contractor, which he misused a government issued phone to stay in touch with, came to light. Then there’s Army Lt. Gen. Ronald L. Lewis, a former aide to then-Secretary of Defense Ash Carter, who billed his government issue card for visits to strip clubs. And don’t forget, Rear Adm. Bruce Loveless, caught up in the “Fat Leonard” bribery scandal that’s plagued the Navy for years, or the Army’s Maj. Gen. Wayne Grigsby, who was retired as a one-star general due to an inappropriate relationship with a female captain on his staff.

Needless to say — or maybe not, since so many at the top seem to forget — while rank brings with it some privileges, it comes with a great deal of responsibility. And when the top-brass play fast and loose with their position, leveraging rank and power for personal gain rather than for the benefit of their troops as they’re supposed to do, they send a message that codes of behavior — like, I don’t know, maybe not sending suggestive texts late at night, or at any time, to your soldier’s spouse — don’t apply to them.

“It erodes confidence in the junior officers and enlisted soldiers who serve under him. It's a message that this guy thinks he's above the law,” Don Christensen a former Air Force chief prosecutor and president of Protect our Defenders, an advocacy group for military sexual assault victims told USA Today. “With all the attention we have paid to improper relationships in the military, he just didn’t care … He should lose his command over this. It’s probably time for him to retire.”