Recently disclosed documents shed new light on the circumstances around the sudden dismissal of Maj. Gen. Wayne Grigsby as commander... 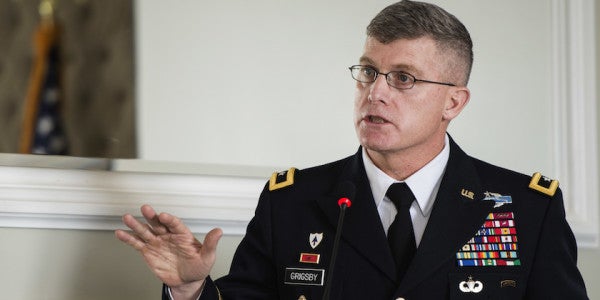 Recently disclosed documents shed new light on the circumstances around the sudden dismissal of Maj. Gen. Wayne Grigsby as commander of the U.S. Army's 1st Infantry Division last year, including the general’s candid explanation for doing the thing that got him fired: fraternization with a female subordinate.

As it turns out, Grigsby was having “an inappropriate relationship with a captain on his staff,” according to the documents, obtained by Army Times through a Freedom of Information Act request. The documents also show that the relationship persisted despite warnings from Grigsby’s chief of staff and sergeant major — and that the general blamed deployment-induced relationship frustrations for his behavior.

“I do not want to make any excuses, but you can see from my record that I have been deployed times for a total of years — practically every other year since 9/11,” Grigsby wrote in response to an April memorandum of reprimand from then-Army Vice Chief of Staff Gen. Dan Allyn, who accused Grigsby of placing his personal interests “above those of the unit as it prepared for combat.”

Grigsby argued that the affair was the result of an increased operational tempo. “Due in large part to this frenetic schedule, I have been struggling with my family situation for a while, attempting to balance a military career and be the husband, father and grandfather I desired to be and what my family reasonably expected from me,” he wrote.

According to Army Times, nothing in the inspector general’s report indicates that Grigsby’s relationship with his subordinate was sexual; however, it did show that members of his staff apparently suspected the relationship had become physical.

Army Times also uncovered two IG complaints — presumably filed before Grigsby was fired — alleging that his ability to make sound decisions was impaired by the tryst, and that it had jeopardized his marriage to such an extent that “rumors were flying around headquarters that Grigsby’s wife was aware of the relationship and had moved out of their home.”

Army officials have never publicly discussed why Grigsby was relieved of his command. The reticence may have something to do with the fact that Grigsby held the top position at Fort Riley, Kansas when his indiscretions came to light.

Maj. Gen. Joseph Martin replaced Grigsby a week after he was dismissed in September 2016; shortly after, he led the 1st Infantry Division’s headquarters to Iraq to support anti-ISIS operations. Grigsby has since served as a special assistant to the director of the Army staff. Grigsby is scheduled to retire in August as a brigadier general, a rank below the one he held prior to the scandal.

In his response to Allyn’s memorandum of reprimand, Grigsby explained that he was in weekly counseling to deal with the personal issues, and that he believed he had served honorably as the commander of the 1st Infantry Division.

“I base this assessment not only on my observations, but the evaluation of the unit’s performance during our Division Warfighter Exercise and the continued execution of the Division Headquarters and numerous brigades currently deployed through the world,” he wrote.