A complaint from a 2014 briefing alleged that Lt. Gen John F. Mulholland Jr. “failed to treat his subordinates with... 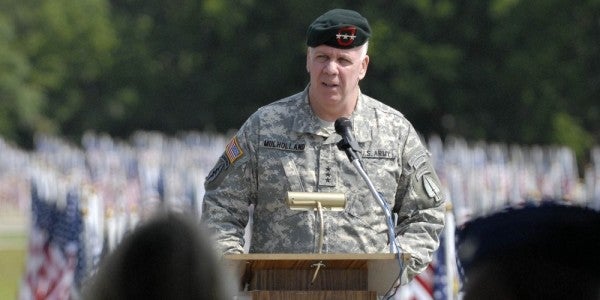 A complaint from a 2014 briefing alleged that Lt. Gen John F. Mulholland Jr. “failed to treat his subordinates with dignity and respect” when he suggested the presenters be shot and repeatedly swore at them during the briefing at U.S. Special Operations Command headquarters, at MacDill Air Force Base in Tampa, Florida, Army Times reports.

Less than a minute into the meeting, Mulholland remarked that “this is not f— ing right,” according to the report. This continued throughout the 50-minute meeting, with Mulholland allegedly using the f-word “about five times” and saying that he would “fire all of you motherf—kers,” during the meeting in order to “to punctuate his comments.”

Mulholland was furious that the briefing failed to follow the instructions that he and the top officer in command, Adm. William McRaven, had provided, reports The Washington Post.

Witness accounts say that Mulholland told team members they “should be taken out and shot,” and Mulholland reportedly admitted that he may have said something similar to that.

In a July 2014 report, Department of Defense investigators wrote that the remarks made by Mulholland were not indicative of his normal behavior. The report was posted in the Office of the Inspector General’s Freedom of Information Act online reading room.

Army Times reports that Mulholland cooperated with the investigation. He reportedly told investigators that his conduct “probably failed own standards,” adding that after what he called a “colorful” discussion, he told the group: “I love you guys.”

While the report states that one witness called Mulholland “angry to the point of being almost “uncontrollable.” Others told investigators that they didn't deem the meeting worthy of a complaint, or that they weren't surprised by the profanity, and that the remarks didn't amount to personal attacks or threats.

Mulholland, left his post as the former SOCOM head roughly six months after the report’s completion for his current post as the CIA’s associate director for military affairs. The Washington Post reports that the inspector general substantiated the allegations against Mulholland and suggested that the Army secretary take some form of corrective action against him. Mulholland later apologized to the person who filed the complaint and others in the room at the time.