As A Young Captain, McMaster Commanded One Of The Most Epic Tank Battles In History

Army Lt. Gen. H.R. McMaster earned his reputation for being an incredible military officer not in the Pentagon or inside... 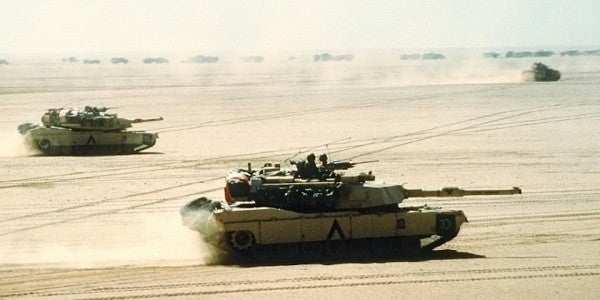 Army Lt. Gen. H.R. McMaster earned his reputation for being an incredible military officer not in the Pentagon or inside the D.C. beltway, but in one of the fiercest tank battles in military history. In 1991, McMaster was a 28-year-old Army captain, and commander of a small section called Eagle Troop, Second Squadron, Second Armored Cavalry Regiment.

McMaster found himself in Iraq during the Gulf War to intervene against then-Iraqi dictator Saddam Hussein’s incursion on Kuwait. In one of the key resulting battles, the Battle of 73 Easting, McMaster would emerge a legend and a war hero.

It was Feb. 26, 1991. McMaster’s regiment was tasked with serving as the forward covering element of the VII Corps as it advanced into Iraq. But McMaster’s small unit ran up against a much larger brigade of the Iraqi Republican Guard’s Tawakalna Division and elements of its 10th Armored Division. That enemy unit was commanded by a man McMaster refers to in his writing only as “Major Mohammed.”

Mohammed was an experienced combat officer, who had been trained in the United States and was a graduate of the Army’s demanding Infantry Officer Advanced Course at Fort Benning, Georgia, according to a profile of the battle McMaster wrote in the online war journal the Strategy Bridge.

“Mohammed’s defense was fundamentally sound. He took advantage of an imperceptible rise in the terrain that ran perpendicular to the road and directly through the village to organize a reverse slope defense on the east side of that ridge. He anticipated that upon encountering his strong point at the village, we would bypass it either to the north or south,” McMaster wrote. “He built two engagement areas or kill sacks on the eastern side of the ridge to the north and the south of the village, emplaced minefields to disrupt forward movement, and dug in approximately forty tanks and sixteen BMPs about one thousand meters from the ridge. His plan was to engage and destroy us piecemeal as we moved over the crest.”

McMaster’s unit was much smaller, comprising nine M1A1 Abrams tanks, 12 M3A2 Bradley fighting vehicles, a small number of support vehicles, and a total of 140 soldiers. They wiped out Mohammed’s forces in 23 minutes, destroying roughly 30 tanks, 20 personnel carriers, and 30 trucks in what would be called the last great tank battle of the 20th century.

Mohammed’s critical mistake centered around his assumptions about his enemy and what was possible. He assumed that the American forces would have to travel via the road, and oriented his tanks and other weaponry in that direction. He based that assumption on the idea that U.S. forces could not navigate across the desert with its indiscernible geographic conditions, apparently unaware of the new GPS technology that McMaster’s tanks and Bradleys were outfitted with. The technologically inferior Iraqi weapons had to back out of their entrenched fighting positions in order to adjust to McMaster’s coming onslaught.

In one instance, McMaster’s advantage in technology and tactics resulted in three tanks being destroyed in about 10 seconds.

McMaster wrote an in-depth account of how he pulled off the devastating victory soon after he redeployed to the United States in 1991. He wanted to create a bit of a manual on effective tank warfare that he felt he lacked as a young commander, as well as create a written account of Eagle Troop’s exploits for the American public.

“There is not much written … about pitched armored combat the small unit level,” he wrote. “I drafted this account immediately after the temporary cease-fire in hope that I could relate the Troop's experience to the American people whose support we felt in a very direct manner.”

He detailed the battle blow by blow, stopping when he named every soldier to also state their hometown, and sometimes say something about them personally. It’s a masterful blend of doctrinal debrief and battlefield diary.

“My gunner, Staff Sergeant Craig Koch of Williamsport, Pennsylvania, laid the tank's sight on the center of the target. He engaged the laser rangefinder and the digital display showed that the enemy vehicle was over two thousand meters away,” McMaster wrote. “The tank's computer allowed for the range, crosswind, and the speed of the target.”

McMaster’s battlefield conduct reveals his penchant of battlefield tactics, coolness under pressure, and perhaps most notably, his willingness to disobey superiors.

“[1st Lt. John Gifford, Eagle Troop’s executive officer] called me from the command post to remind me that the 70 easting was the limit of advance. We were already beyond it. I told him, ‘I can't stop. We're still in contact. Tell them I'm sorry,’” McMaster wrote. “Gifford explained the situation to the squadron headquarters on the radio. … If we had stopped, we would have forfeited the shock effect we had inflicted on the enemy. Had we halted, we would have given the enemy farther to the east an opportunity to organize an effort against us while we presented them with stationary targets. We had the advantage and had to finish the battle rapidly.”

The Battle of 73 Easting would go down as an epic demonstration of American superior military technology and tactics, but years later, McMaster would cite America’s success in the war as luring leaders into thinking the American military was indestructible. McMaster described the success as a result of Saddam Hussein’s mistake in engaging in conventional warfare against the United States.

“There are two ways to fight the United States military: Asymmetrically and stupid,” McMaster would later say in a National Geographic documentary. “'Asymmetrically' means, you are going to try to avoid our strengths. In the 1991 Gulf War, it's like we called Saddam's army out into the school yard and beat up that army.”