For those looking for tank-level destruction at their fingertips, but don’t feel like signing on the dotted line (again), you... 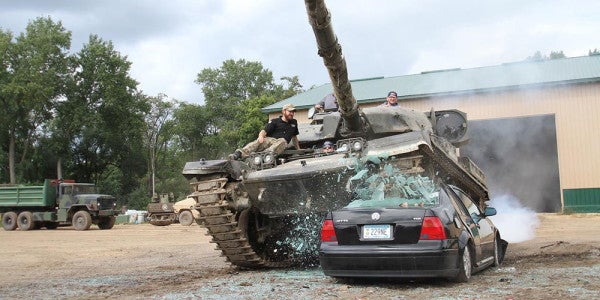 For those looking for tank-level destruction at their fingertips, but don’t feel like signing on the dotted line (again), you might be in luck.

The aptly named company Drive A Tank, lets you do exactly that. The family-owned and operated business describes itself as the only place in the world where everyday civilians can drive tanks, fire machine guns, and oversee sweet sweet destruction from the driver’s seat of a tank.

At Drive A Tank, you can go rampaging through a massive woodland course in Kasota, Minnesota, in the driver’s seat of a tank. The theme park has a wide range of military vehicles stretching from World War II through the Cold War and a string of packages that allow you to drive armored personnel carriers, artillery vehicles, and full-on battle tanks.

But just driving a tank isn’t enough, we want destruction. The higher end and more expensive packages are designed for just that. It starts at $449 for the 3-Star package, which puts you in the driver’s seat of a FV433 Abbot Self-Propelled-Artillery and lets you unload on a gun range with World War II-era machine guns. As you steadily fork over more money, you get more tanks, more guns, and of course, more destruction, like crushing cars and plowing through mobile homes.

For history buffs who want to experience what it was like to command an armored behemoth during the heyday of tank warfare — World War II — Drive A Tank puts you inside of a Sherman tank.

It may come with a hefty price tag, and while you can get your tank fix elsewhere — the military, for example — there’s something to be said about being a paying customer, because you know what that means? After a long day of crushing cars, buildings, and shooting, you just pack up and leave. No police call. No formation. Just hop in your car, head home, and enjoy the fond memories of laying waste to imaginary enemies as you careened through the course in a giant steel-killing machine.