This Badass Military-Inspired Truck Is A Literal Tank

We may earn revenue from the products available on this page and participate in affiliate programs.Do you ever miss cruising... 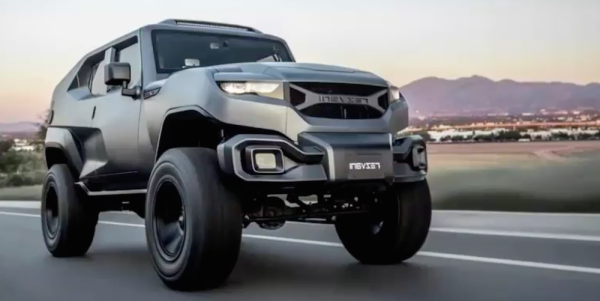 Do you ever miss cruising around the sandbox, gliding across dunes with the pure power of a Humvee rattling beneath you? Well, now you can have that back, except smoother, sleeker, and with a whole lot less maintenance. The civilian “Tank” by Rezvani Motor company is an all-out monster of a truck.

With a 6.4-liter Hemi V8 that dishes out 500 horsepower on four-wheel drive, the military-inspired Tank is a sport utility vehicle that takes off-roading to a whole other level.

Its creator, Samir Sadikhov, was inspired by a conglomeration of military vehicles and merged all those designs in this civilian SUV. But it’s not the first insane creation from Rezvani. The motor company boasts some other, well, beastly vehicles: Three of its former vehicles are calledthe Beast, the Beast X, and the Beast Alpha.

The Tank, which makes its debut in 2018, is based on the original Jeep Wrangler design and framework, but its features go far beyond that venerable 4×4. And for $178,000, clearly, they should.

Though there aren’t many specifics yet on the vehicle’s full, cost-justifying features, Rezvani says there are two different types of off-road packages. The Tank also features automated doors and a FLIR infrared camera that allows you to drive in the dead of night without street lights or headlights. But it’s luxurious, too: The seats boast hand-stitched leather, and the Tank also has an entertainment console with apps.

And if all those features aren’t enough, you can also opt for “ballistic armor protection” and bulletproof glass windows. But our real question is whether or not the Tank can survive a nuclear attack, because that’s probably the kind of war that’s coming soon, at least according to North Korean leader Kim Jong Un. Maybe it’ll be a feature of the 2019 model?