They are useful though. 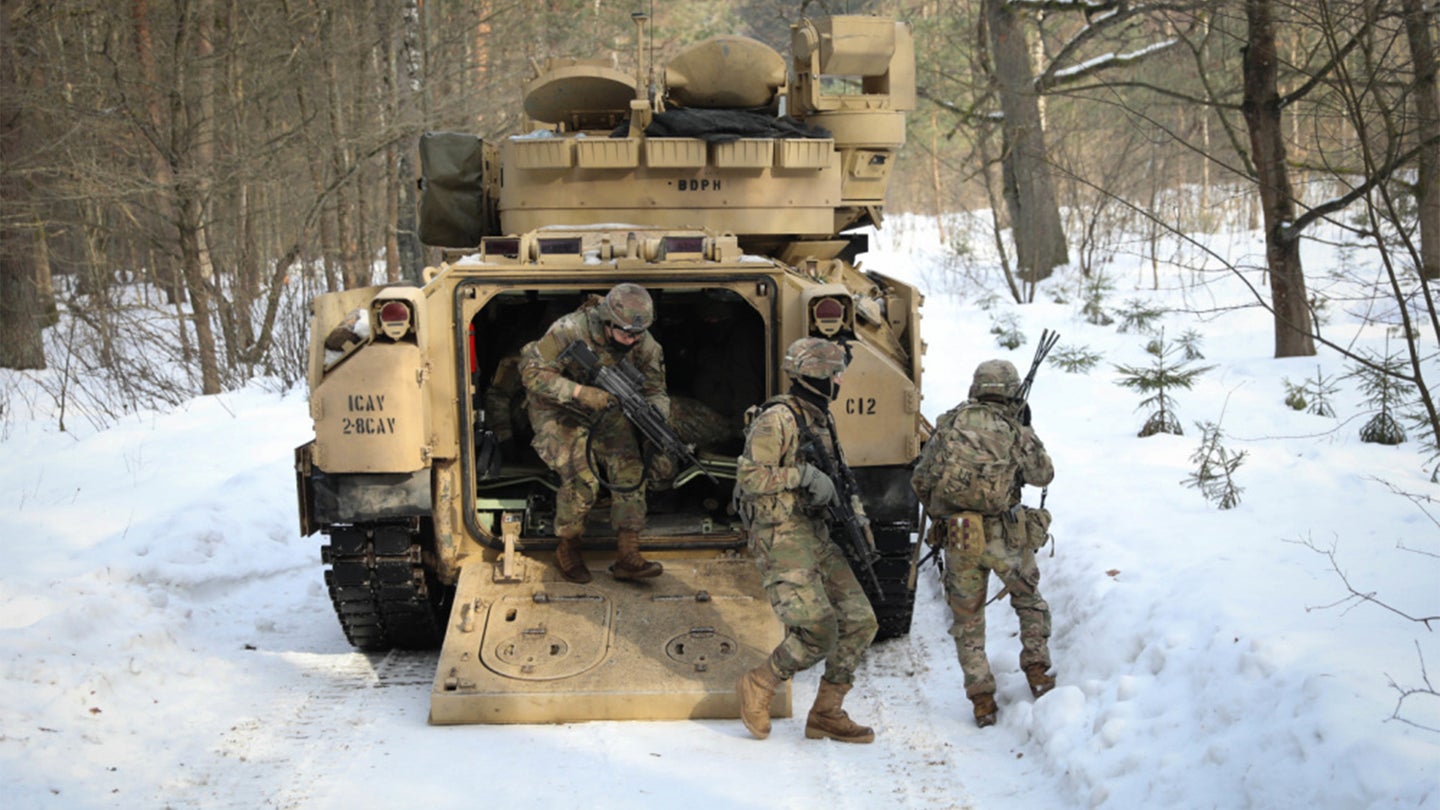 Dismount infantrymen assigned to 2nd Battalion, 8th Cavalry Regiment, race out of the back of a Bradley Fighting Vehicle Feb. 21, 2021, as they participate with Lithuanian 21st Dragoon Battalion in a combined training exercise. The Troopers traveled a two-mile route where they were faced with small units of Lithuanian forces who placed various ambushes along the route. (U.S. Army photo / Sgt. Alexandra Shea).
SHARE

The United States is considering sending a shipment of the aging Bradley Fighting Vehicles to Ukraine. Bloomberg first reported on the news on Thursday, citing sources familiar with the matter who asked for anonymity. The Bradley Fighting Vehicles would be part of a future arms assistance package, those sources told Bloomberg, but it’s unclear how many would be sent.

The possibility of sending the Bradleys seems plausible, according to experts Bloomberg spoke to, citing the large inventory of the vehicles the United States has.

“Bradleys would provide a major increase in ground combat capability because it is, in effect, a light tank,” Mark Cancian with the Center for Strategic and International Studies told Bloomberg.

And predictably people bristled at that term.

To be clear, the Bradley is many things but it is not a tank. There are specifics to what qualifies as a tank, and what constitutes a “light tank.” Even the U.S. Army gets into the fray on the word choice — it refused to call its new Mobile Protected Firepower vehicles light tanks. The Bradley is an infantry vehicle first, it just happens to be armed. Its 25mm gun is too small to meet the definitions of a tank. Tankers and other members of the military community can get passionate about using the right terminology for vehicles.

The possibility of sending Bradleys comes after the United States sent its latest arms assistance package to Ukraine, which included Patriot missiles. Ukrainian troops now need to be trained on those weapon systems. If Kyiv does receive a shipment of Bradleys, crews would need training on that before they go to the front lines, which could take some time.

Ukraine has long asked for American tanks to help its military, but so far the Department of defense hasn’t sent any. The Pentagon previously approved buying 45 refurbished T-72 tanks to Ukraine’s army in November.

The United States has a large surplus of Bradleys. The design is more than 40 years old, and the Pentagon has been searching for years for a new infantry fighting vehicle to replace the Bradley.

Although Bradleys are, again, not tanks, they could give Ukrainian forces a boost. Their mobility and armaments would be a gain for Ukrainian troops, particularly in the winter when snow and cold conditions might slow their counterattacks in the east. That counteroffensive has veered into trench warfare in the Donbas region. Ukraine has said it expects a new Russian offensive in the new year.

Although Ukraine has its own contingent of tanks and other armored vehicles, much of its motorized equipment has been works of ingenuity — captured and salvaged Russian tanks or an array of technicals and battle buggies created for the conflict.

Retired general David Perkins told Bloomberg that Bradleys “would be a significant improvement over current Ukrainian fighting vehicles,” saying they could be a match for Russia’s tanks, even with the smaller armament. Russia’s own tanks have suffered during the war; Western-supplied anti-tank missiles as well as improvised attacks have destroyed or disabled hundreds of pieces of Russian armor.

If the United States does decide to send Bradleys to Ukraine, they could have a noticeable impact on the war. They’re just not tanks.

After this story was first published, Cancian told Task & Purpose that he stands by his original statement that a Bradley Fighting vehicle is in effect light tanks. Cancian noted that Bradleys have light armor and a 25mm gun that can penetrate many enemy armored vehicles – including Iraqi tanks.

“The Army cannot call Bradleys tanks because tanks belong to the armor branch, whereas infantry fighting vehicles belong to the infantry branch, Cancian said. “If the Army called a Bradley a tank or even acknowledged that might be used that way, that would set off the bitter inter-branch battle. Better to maintain the fiction that tanks and infantry fighting vehicles are completely different kinds of vehicles. However, I am not constrained by Army’s bureaucratically-driven distinctions and can characterize them based on the capabilities they possess.”

UPDATE: This story was update on Jan. 2 with comments from Mark Cancian.