All alone, together: The emotional essence of Christmas at war

Dreaming of a Christmas, like the ones you used to know. 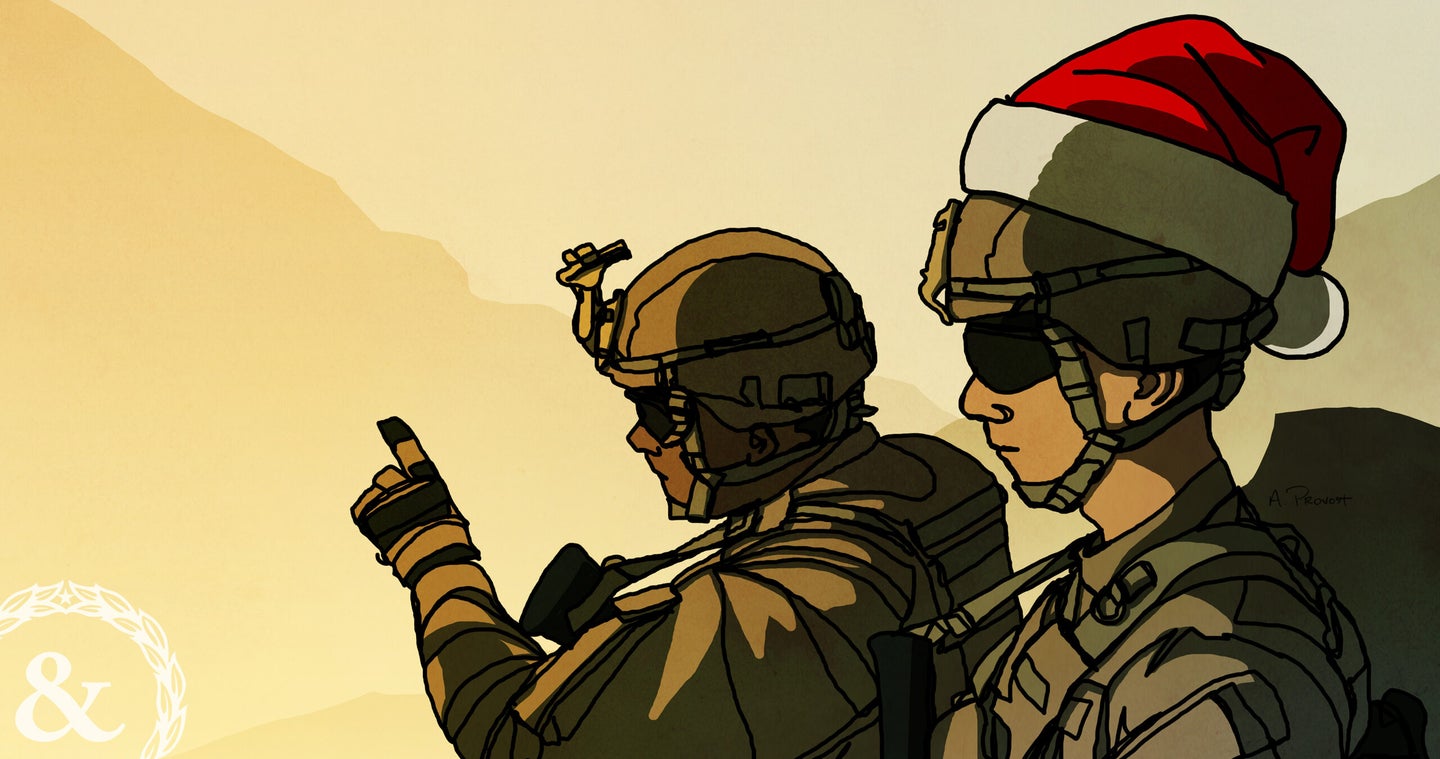 Spending Christmas Day overseas, in a combat zone, a forward area, any deployment — that’s the easy part. You can be confident that your command will truck out the pecan pie and turkey and a Sergeant Major will serve it from a spoon, whether you’re at a main base or a little outpost, a big dining facility or a windy tent. Maybe the pecan pie will be freezer burned, but probably not because the logistics team does a good job for Christmas Day.

It’s an easy day, and even if you pulled the short straw for rooftop guard duty, or overnight watch in the operations center, there was a plate waiting for you — or at least a halfhearted apology if there wasn’t. In any case, you can share that memory with whoever else sucked it up, as you sacrificed Christmas with a buddy or two.

You can tell the story about how you all cut it up around the fire pit, smoking a few butts and laughing about how awful it is or was, being stuck in Poland, Syria, Iraq, South Korea, or the deck of the USS Abraham Lincoln, out there on the frontier. You can tell the story about the awkward Major who tried to get everybody to sing “Silent Night” and even if most of you rolled your eyes at one another, you understood the moment’s gravity. What a lousy fucking Christmas, you’ll mutter to someone, and they’ll smirk because they will understand.

It’s easy to spend Christmas Day in a war zone. It’s easy for those overseas to call home or FaceTime, to share both the memory and the visual experience of Christmas Day with parents, wives, and kids. That artificial conversation’s not ideal, but it’s still comforting holding a camera to your face so they can see you and you can see them. It will be a touchstone of that Christmas, for the future, when Mom or Dad or Brother or Sister or Wife or Husband starts talking about how they were far away and remember when. If you lived it, it is already an easy fallback for conversation and nostalgia at Christmas, maybe this Christmas.

If you remember when you were overseas, before technology and before an easy phone call, then it was easy to not even worry. No ability to schedule a call, so no obligations or expectations; you could put your head down without guilt and have another slice of pecan pie. It was easy to hunker down with everyone else, rain or snow, all in it together.

In the future, that will make it easy to email a friend and ask them, “remember when the awkward Major tried to make us all sing Silent Night, and you actually sang along you fucking loser.” It will be easy to phone up another friend years later, maybe this year, and say, “those supply assholes couldn’t even give us fresh pecan pie – it was like eating an ice cube. They fucked us again.” And your friend will tell you, “Merry Christmas, like hell. The General, that guy got his pecan pie, I’ll tell you that much.” And you’ll laugh, and they’ll laugh, and you’ll both laugh.

The 1954 movie White Christmas opens in World War II-ravaged Europe, with a company of men celebrating Christmas Eve by putting on a song and dance revue for themselves. The lead performers are Bing Crosby and Danny Kaye, playing an officer and an enlisted man. Their division’s beloved commanding general is being reassigned, and the soldiers send him off with a rousing sing-a-long chorus of, “we’ll follow the Old Man wherever he wants to go.”

The General scolds his men and says how they look unprofessional and worn out. He doesn’t mean any of the insults; it’s just how you make the goodbye easy for everyone.

A puffed-up martinet is taking command and is upset by the Christmas show in a warzone, telling the General that he’ll get the Division back up to fighting snuff right away. The General tells a jeep driver to take the replacement back to headquarters and “use the shortcut, Sergeant,” so this popinjay can officially assume command. It’s a trick, a long detour to buy time so the men can finish their Christmas show. The General’s adjutant watches them drive off, and says, “That sergeant will be a private by morning.”

One man’s rank sacrificed for the greater good, and along with it the responsibility leadership sometimes brings. Especially at Christmas, when the squad leader, or platoon sergeant, or company commander, had to decide that for a few of you, it was going to be a bad day.

Despite that or because of it, there’s often a special edge to the loyalty one feels toward whatever commander led a unit on Christmas Day. Maybe not your captain or squad leader — you saw them all the time, and any resentment was personal — but for the general or the admiral. If they slept on a better bed, or ate unfrozen pecan pie, you knew how much their Christmas decisions would make them miserable. They were up there alone, after all, no one to blame if things went south. At least you had each other.

Christmas movies and songs focus on that togetherness. When you’re serving overseas, the unspoken message is we’re all living this same moment, doing the best we can. Maybe it’s an assignment to a comfortable post, or maybe it’s a frightful place where stakes are high and the outcome uncertain. You’re overseas and the ones you care about are not.

The Christmas story is a yearly chance to build our own narrative, to make ourselves the main character of our own movie – creating that mental filmstrip and soundtrack so that the music swells in the right place and captures us center-screen like Bing Crosby in VistaVision. That locked-in memory will make up for all the dusty, boring years to come.

Christmas Day overseas, apart from the ones you wish were there, but together with the ones that you’ll remember.

Now think of the perspective of the opposite main characters in our most inspirational Christmas movies: George Bailey and Ebenezer Scrooge.

Their Christmas Day will come to easy and emotional conclusions — Scrooge goes to his nephew’s house for dinner, and George is saved by the Bedford Falls citizens.

Before all that, they faced Christmas Eve alone. They had no human companions on their journey through the years, only ghosts and angels. Christmas at wartime is not the pecan pie or the Silent Night. It is a day on the calendar like Scrooge’s cold bowl of gruel, like George Bailey’s world where no one knew his name.

Imagine a few days before Christmas Day itself. Imagine a place like Fort Bragg — or your post, your ship — places that should be full of life and deliberate activity. Imagine the main drag lined with all the barracks; on Fort Bragg, it was Gruber Road, bordered by miles of the 82nd Airborne’s three-story barracks, home to regiments of 5,000 soldiers plus or minus. Imagine Gruber Road deserted down all four lanes. Dark barracks, vacant parking lots, a windswept straightaway and North Carolina’s damp December chill. No twinkling Christmas lights, only an industrial yellow glare above entryways or shining from a few offices. A CQ stands in one entryway, backlit in the doorframe. For all evidence, the one human soul left behind in all that concrete.

The abandonment isn’t for the holidays, but because everyone has shipped out. Where? Does it matter? They’ve left and you will join them soon. Imagine your flight leaving early Christmas Day, so there will be no phone calls on the holiday, no pecan pie, just an anonymous transit to the desert of a memory. You leave before Christmas has begun and you’ll arrive after its end. A year without a Santa Claus.

In Meet Me in St. Louis, Judy Garland sings “Have Yourself a Merry Little Christmas” to her sister Tootie. They’re leaving, moving to New York City and away from all their comforts. The movie came out in 1944, so no one would listen to the song’s lyrics and not connect the dots to the thousands of soldiers missing Christmas, in the war overseas.

“Someday soon, we all will be together, if the fates allow,” Judy sings. “Until then, we’ll have to muddle through somehow.”

Judy sings to her sister, but she sings to herself. The song is a monologue. Have yourself a merry little Christmas.

The days of tens of thousands of men and women deployed overseas are over, for now. This Christmas can be nostalgic, for those with memories to reminisce about the Christmas Day spent on the frontier.

Make the call to the buddy who sacrificed Christmas with you, complain about your commander who gave you rooftop guard duty when it wasn’t your turn, so married squad-mates could call their wives and children at a reasonable time. You, without even a girlfriend, just mom who sent too many cards.

You sat up there and grumbled through the midnight hour, and you could see the Christmas stars from the roof. You muddled through, somehow.