“Every aircraft we offload fuel to is in some form supporting the guys on the ground — who are also missing their families." 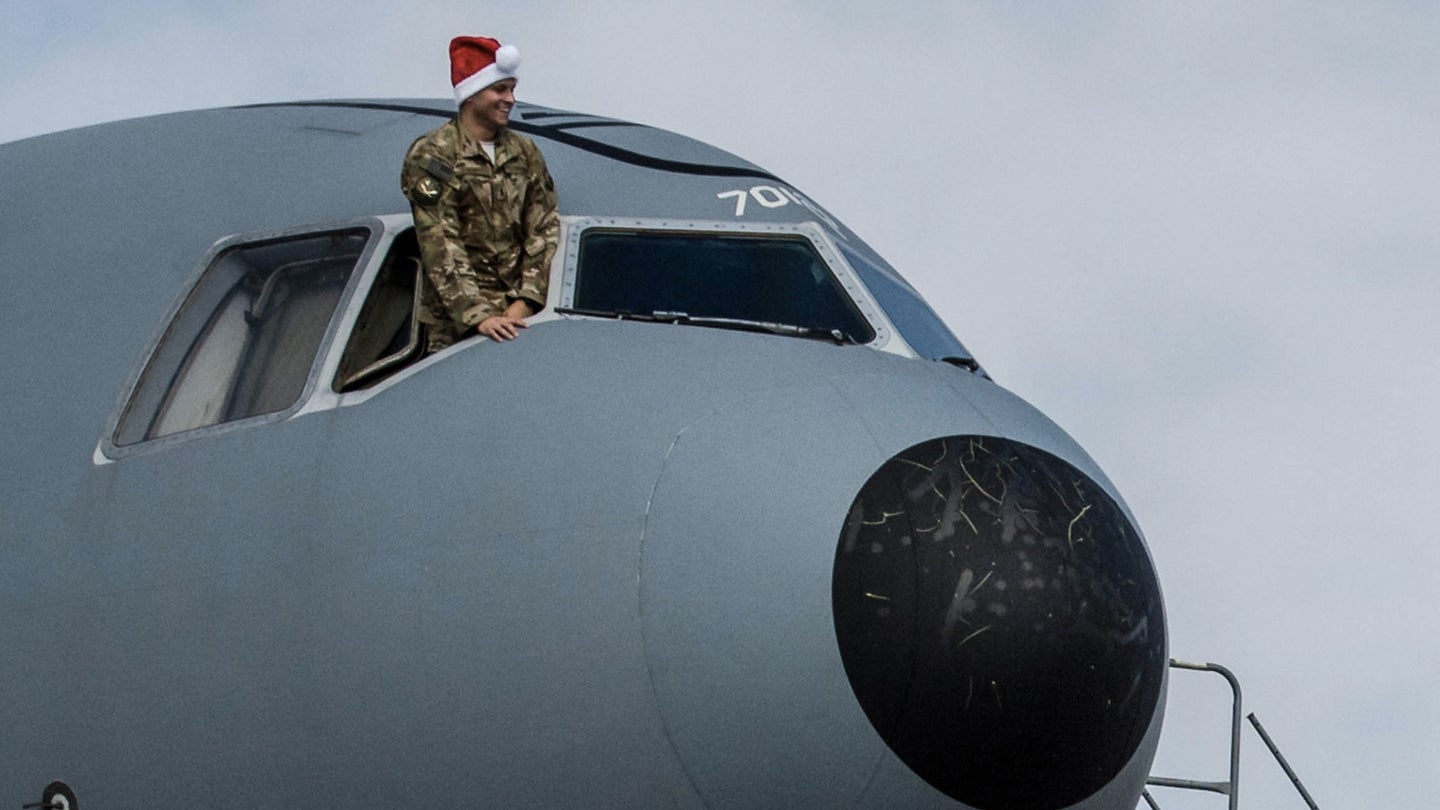 Every year, thousands of service members around the world spend the holidays away from their families so they can keep watch on America’s national security. Some of those service members spend Christmas not only away from family, but also away from the Earth’s surface. A 2016 press release documented how one group of airmen assigned to the Middle East spent Christmas day aboard a KC-10 Extender flying 30,000 feet up in the air in order to refuel coalition aircraft in the fight against the Islamic State militant group.

Christmas Day 2016 started with fog on the flight line as the four airmen rode to their jet in a transit van. Holiday music played on a speaker while the aircrew and two crew chiefs conducted preflight inspections, and a lieutenant passed around care package cookies. The flight engineer, Staff Sgt. Aaron — the full names of the airmen were not included in the press release, likely because they were deployed at the time — said that a tight-knit aircrew can create its own sense of family during the holidays.

“It’s just the four of us; day in and day out, at all hours, they’re by your side,” he said. “We laugh together, cry together, get mad at each other and at the end of every day we come together to find a way to make the mission work.”

The mission that day was similar to the hundreds of others conducted by the 380th’s Air Expeditionary Wing, whose KC-10s flew more than 1,500 sorties from October to December that year, according to a photo caption accompanying the press release. The aircraft reached its position near Mosul, Iraq, where the refueling operator, Senior Airman Grant, readied the boom for business.

The KC-10 crew was not the only one working on Christmas. At least three other coalition aircraft stopped by to gas up, including a flight of two F-15E Strike Eagles. In total, the KC-10 passed 108,000 pounds of fuel during the sortie. The weight is close to that of a gray whale, one of the largest mammals on Earth, but it’s less than a third of the KC-10’s maximum fuel load of 356,000 pounds. Still, it meant a lot to the crew to help their fellow service members away from home.

“Flying on Christmas day was good for us because every aircraft we offload fuel to is in some form supporting the guys on the ground — who are also missing their families,” said Lt. Col. Danny, a KC-10 pilot.  “The fight against terrorism is 24/7 and we have to maintain decisive airpower over the area of responsibility at all times, even on Christmas.”

The gravity of the mission did not stop the crew from bringing a little holiday cheer above the clouds. Both the aircrew aboard the KC-10 and at least one F-16 pilot wore Santa hats, but the big perk of the Extender is its two metal ovens located behind the cockpit. Those two ovens help refuel the refuelers on any sortie, and Senior Airman Grant took full advantage of them on the Christmas Day flight, cranking up the ovens to 400 degrees and filling the aircraft with the smell of pizza and chocolate chip cookies.

“It’s funny, you know, we got pizza as opposed to being at home with friends and family at a big dinner. But, we make it fun,” he said. “It’s kind of cool to see everyone bring the holiday spirit up in the air. We see Santa hats up here and everybody is having fun all the while still executing and doing what we need to do.”

Though it might be surprising to hear of a white Christmas in the desert climate of Iraq, photos of the refueling flight show fluffy white clouds stretching beneath the aircraft that day.

“As the sun set on the world a warm glow softly covered the powdery clouds,” the press release said. “The white Christmas sky turned orange, then purple and then black. Panels of lights, knobs and gauges draped the cockpit like a finely lit tree.”

Like Santa Claus returning from a night of present deliveries, the KC-10 crew eventually landed safely, ending another successful sortie. For whoever is stationed abroad for the holidays this year, hopefully their mission will end as smoothly as the KC-10 crew’s did that Christmas day six years ago.