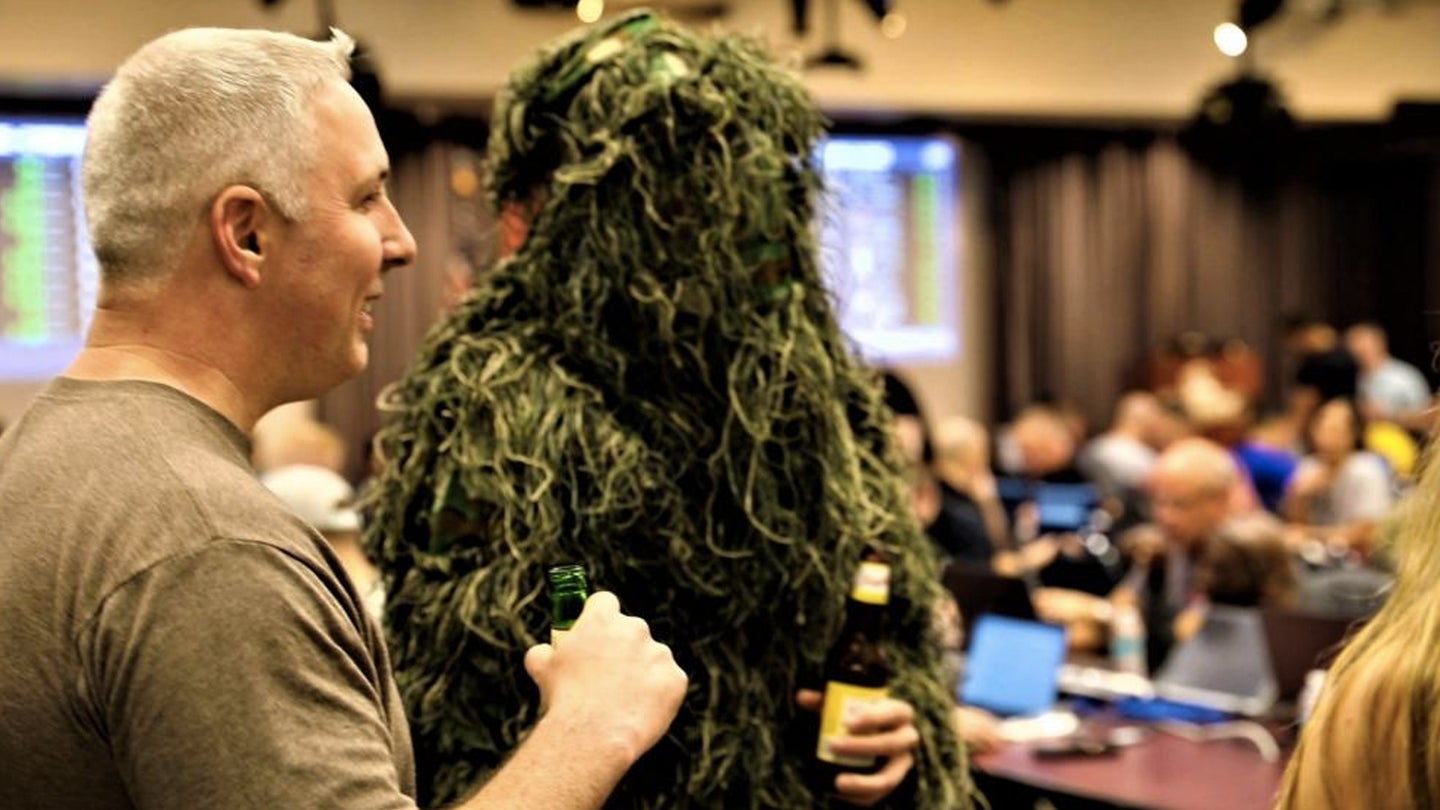 A seven-foot tall man took ‘Incognito mode’ to a new level by wearing a ghillie suit, the mop-like camouflage outfit typically worn by snipers, to a cybersecurity competition in Arkansas last week.

The man, identified only as “a large man in a ghillie suit” in a recent Army press release, was not the only one to wear unusual attire to the contest. Other participants wore Hawaiian shirts, flip-flops, and one man even played a ukulele. They might not look like a crack commando unit, but these cyber operators are actually the heroes the U.S. military needs in a precarious era of emerging technologies and great power competition.

The event with the colorful clothing was a small part of Cyber Shield 2022, which the Army described as America’s “premiere unclassified cyber training exercise.” The intense 12-day event involved more than 800 National Guard soldiers and airmen, civilian experts and other service members as well as experts from private industry and other government agencies. The diverse range of backgrounds is part of what makes Cyber Shield a premiere event.

“When we talk about cyberattacks, whether it’s state-sponsored, independent criminals — we’ve all seen these attacks on not only some of our private infrastructure but our critical infrastructure at every state and department as well as within the Department of Defense,” said Maj. Gen. Richard Neely, commander of the Illinois National Guard and a master cyberspace officer.

The reserve and Guard focus of Cyber Shield also highlights a unique trait of reservist and Guard cyber operators: they often bring civilian cybersecurity experience with them.

“These military cyber warriors have a significant advantage over their active-duty counterparts, as they bring in those unique civilian-acquired skills and experiences in addition to their military cyber training,” Neely explained.

The more cyber warriors the better, as the military seeks to strengthen its cyberspace game. On Monday, Army officials said they wanted to double the size of its active-duty cyber forces from 3,000 to 6,000 troops, C4ISRNET reported.

“Quite frankly, over the course of the 20 years of conflict, fighting a counterinsurgency, we had divested a significant amount of our electronic warfare capabilities, everything from sensing the environment to electronic protection, and certainly on the electronic attack component of it,” Lt. Gen. John Morrison, deputy chief of cyber for the Army, told reporters. Electronic warfare and cyber warfare are becoming increasingly interlinked.

“All you have to do is read open-source news, and you can see that it is a critical component of what is happening over in Europe right now,” Morrison said.

Indeed, cyber and electronic warfare are playing a large role in the war in Ukraine, where Ukrainian troops are using Russian cell phone signals to target invading troops and using landline field phones to avoid being jammed. Russian troops, meanwhile, launched cyber attacks to wipe out 300 different government and private sector systems in Ukraine right before their invasion in late February, NPR reported.

“If you are Ukrainian, this has been a relentless, unending cyber war that has been launched in correspondence with the physical war in what is clearly the world’s first major hybrid war,” Tom Burt, Microsoft’s head of customer security and trust, told NPR earlier this month.

The U.S. is on the scene too: Army Gen. Paul Nakasone, the head of U.S. Cyber Command, told Sky News earlier this month that the U.S. was conducting hacking operations in support of Ukraine.

“We’ve conducted a series of operations across the full spectrum; offensive, defensive, [and] information operations,” he said.

Those operations could be even more intense in a direct confrontation with Russia, China, other countries or non-state actors. That’s why cyber operators, even the tall guy in the ghillie suit, are so important.

“As current world events show, our ability to protect U.S. military networks and conduct hybrid warfare is crucial in protecting the nation as a whole,”  said George Battistelli, exercise director for Cyber Shield 2022 and deputy chief information officer for the National Guard.

Even essential operators need to blow off some steam though. Based on the press release, the specific event within Cyber Shield that featured ghillie suit man and the ukulele player was Netwars: a two-night computer hacking competition sponsored by the SANS institute where teams of contestants work through information technology puzzles to score points and find flags in a cyberspace version of capture the flag.

“There is a list of things you need to find within the network, like Easter Eggs. You answer questions similar to puzzles or riddles to score points and find the flags,” said one of the competitors, Washington Army National Guard Sgt. 1st Class Lance Shimamoto.

The names of the contestants and teams were just as colorful as the outfits, including Goblin_Sharks, off_Constantly, Happy_Hooligans, Slackers, and The_Unsecures. Alas, it was a non-Hawaiian shirt wearing team that took home the gold: the Sooners of the Oklahoma Army Guard Defensive Cyber Operations Element. It’s all right, ghillie suit guy, you may not have won the contest but you definitely won our hearts.