‘Top Gun: Maverick’ exposed as pro-military in shocking investigation that veterans are dunking on

What else are they hiding from us? 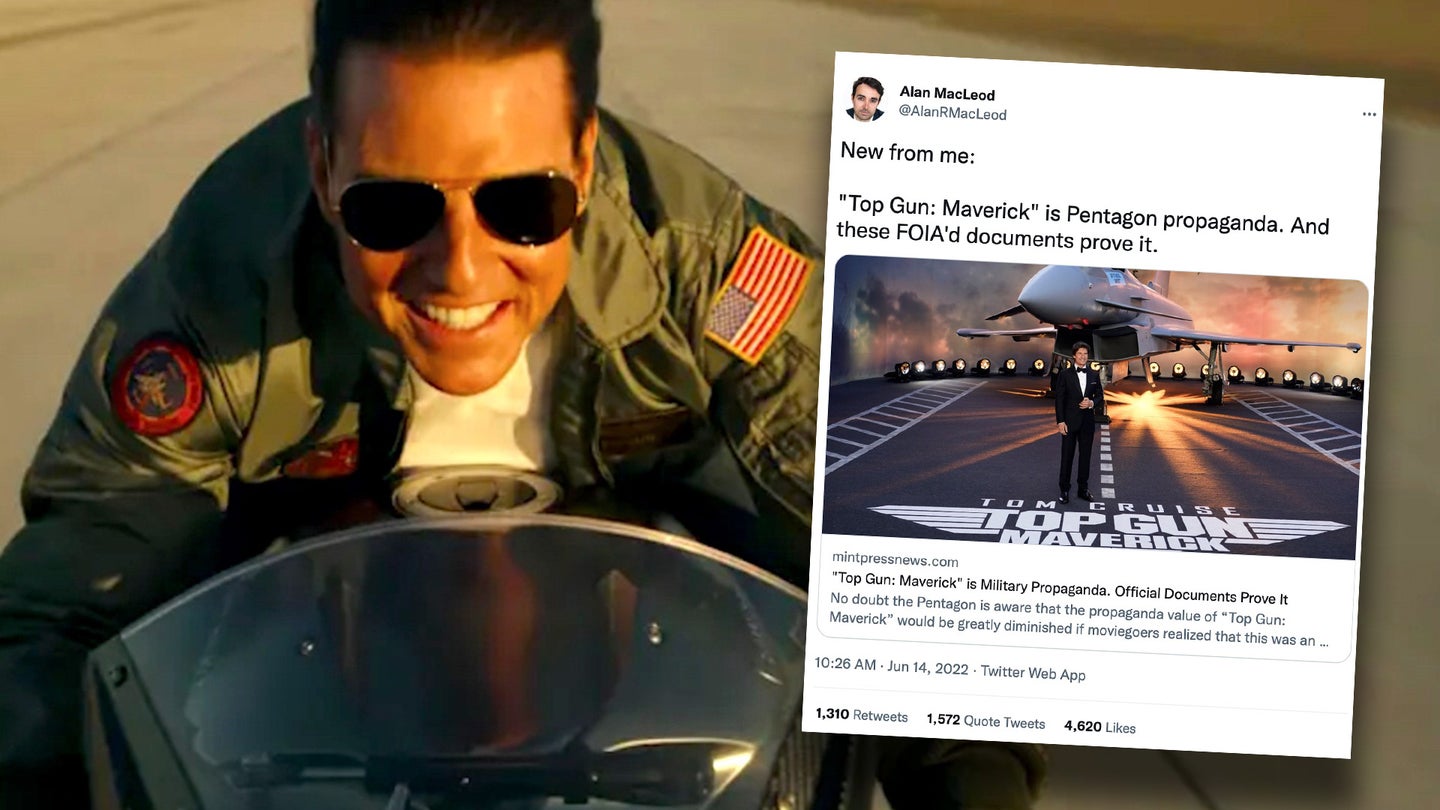 This is the kind of hard-hitting journalism the world needs more of: An investigation from MintPress News, backed up by documents acquired through the Freedom of Information Act, revealed that the Navy played a large role in the production of Top Gun: Maverick.

These documents, which were also published eight months ago at The War Zone, outline that, yes, if you are using all that Navy equipment, the Navy is going to have an interest in making sure it looks really, really cool.

The documents include revelations like the movie being filmed at numerous Navy installations, using Navy equipment, and that the Navy insisted on making sure the actors abide by regulations on height and weight and grooming.

The Navy also insisted that the movie have an officer be assigned to the production to “review with public affairs the script’s thematics and weave in key talking points relevant to the aviation community.”

The Department of Defense even insisted that they continue to be involved in the film’s post-production, presumably in case Tom Cruise or director Joseph Kosinski decided to go rogue and produce a polemic against the Navy.

That a movie about the military would be made with assistance by the military, or that the military’s help comes with some qualifications is apparently still shocking, though. This despite the fact that the very first Academy Award winner for Best Picture, “Wings,” was made back in 1929 with considerable assistance from the War Department.

The non-revelatory status of this revelation wasn’t lost on plenty of veterans and service members in the replies, though.

“The walls of the E-Ring outside the OSD Public Affairs office are covered in posters for movies produced with Pentagon cooperation over the last few decades, but this genius submits a FOIA and thinks he’s Bob Woodward,” wrote a retired paratrooper.

Saying what countless others were probably thinking, one Army engineer replied with “I’m gonna drop this in the ‘no shit, Sherlock’ pile.”

Or, as a Navy veteran put it, “The amount of navel-gazing here is SOMETHING good lord.”

“This guy wasted the good FOIA karma on this ‘scoop?’ asked Army Sgt. Maj. Jason Baker. Task & Purpose will take some of that good karma if it’s still available.

Top Gun: Maverick certainly does portray the Navy in a positive, if completely unrealistic way. It is popular with both audiences and critics. It is, in other words, a movie.

Describing the film, and the Department of Defense’s involvement in its production, as shocking evidence of military propaganda makes a bit more sense when considering the source, MintPress News.

It’s known for publishing widely discredited claims of chemical weapons usage by rebels opposing Syria’s Bashar al-Assad. It has cited “experts” with connections to Russia’s Internet Research Agency, a Saint Petersburg-based troll farm known for flooding the internet with bullshit. It has regularly reposted stories from Russian state media sites such as Sputnik. One could even call the site… propaganda. And all it took to find that out was Google.