Watch the actors of ‘Top Gun: Maverick’ nearly puke in their helmets as they pull 7 to 8 Gs

Thanks to a new behind-the-scenes trailer for ​the highly anticipated ​Top Gun​ sequel, we get to watch a bunch of actors ride in the back seat of an F/A-18 Super Hornet and try desperately not to lose their lunch 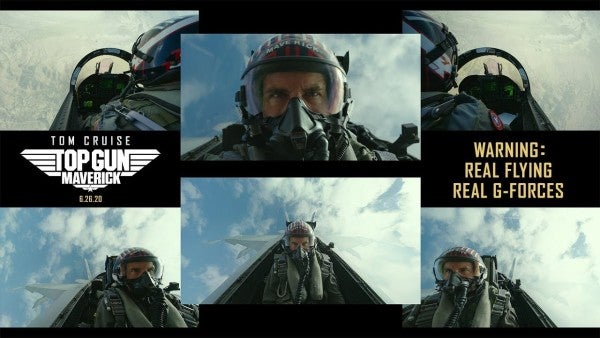 Thanks to a new behind-the-scenes trailer for the highly anticipated Top Gun sequel, we get to watch a bunch of actors ride in the back seat of an F/A-18 Super Hornet and try desperately not to lose their lunch.

“You just can't create this kind of experience unless you shoot it live,” Cruise said in the recently released promo. “In order for us to accomplish this, we have the greatest fighter pilots in the world working with us.”

Directed by Joseph Kosinski, Top Gun: Maverick will hit theaters on June 26, and marks the return of Tom Cruise as Pete 'Maverick' Mitchell, now a captain tasked with training the Navy's newest generation of fighter pilots.

“It's a love letter to aviation,” says producer Jerry Bruckheimer in the behind-the-scenes short. “We're going to show you what it's really like to be a Top Gun pilot.”

To do that, Top Gun: Maverick doubled down on what the original film did best (no, not shirtless volleyball. Although, yes, probably that too.) Based on the trailer, the movie was shot using a new camera system that allowed the film crew to place six IMAX-quality cameras inside the cockpit of an F/A-18 so that every jolt, shake, and nauseated expression could be captured in glorious high definition.

And boy, it is glorious. Just take a look: