Airmen at Fairchild Air Force Base flexed hard by pulling a KC-135 Stratotanker ahead of their annual 92nd Maintenance Group Olympics. 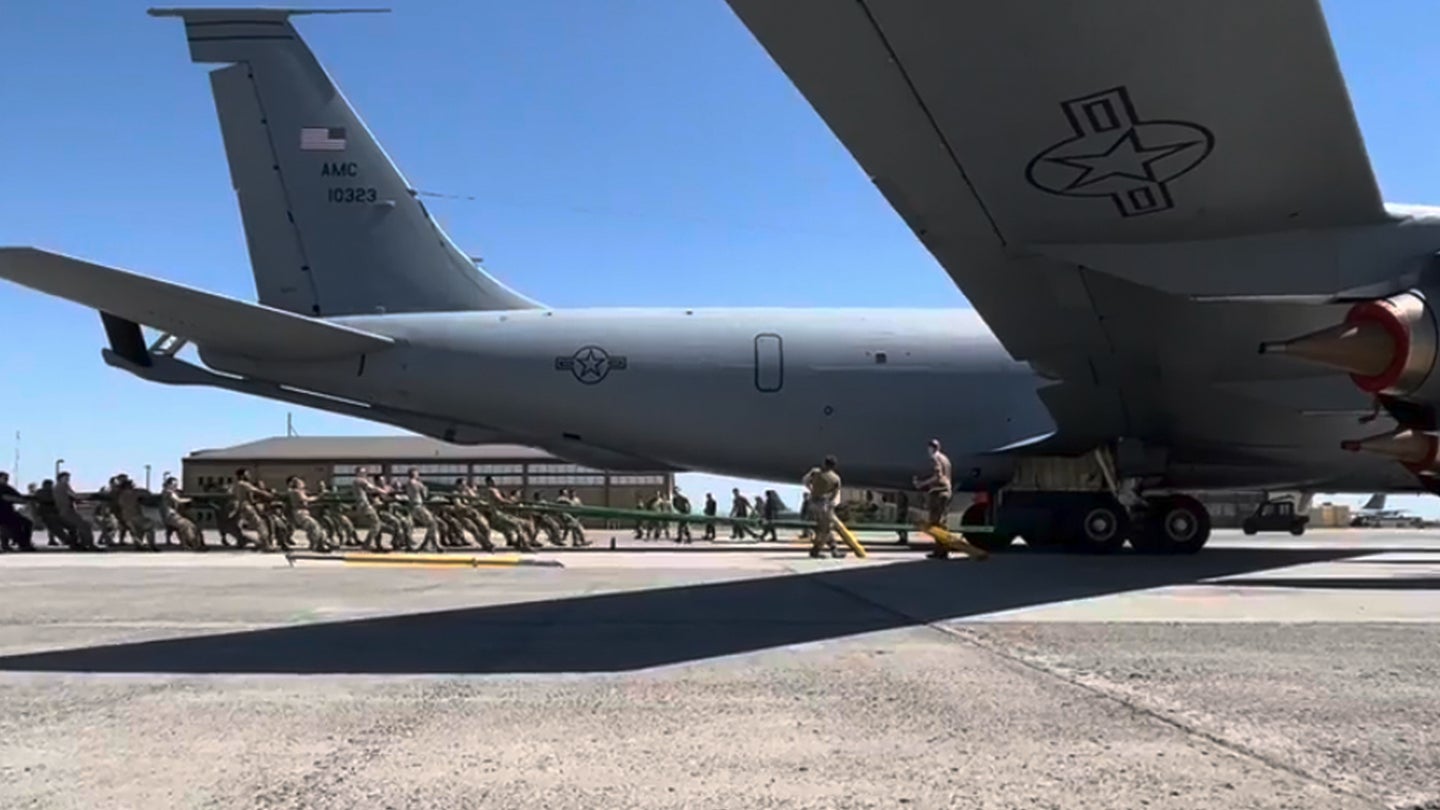 Airmen at Fairchild Air Force Base flexed hard by pulling a KC-135 Stratotanker ahead of their annual 92nd Maintenance Group Olympics. (Photo via Reddit / jman2899).
SHARE

Aircraft maintainers sometimes use the expression “apes together strong” on the unofficial Air Force subreddit — a reference to the reboots of the Planet of the Apes movies — and that sentiment certainly comes across in a recent video where airmen with the 92nd Maintenance Group at Fairchild Air Force Base, Washington pulled a 49-ton KC-135 Stratotanker with nothing but rope, teamwork, and a whole lot of elbow grease.

“No way!” said the person recording the video as the few dozen airmen picked up momentum pulling the tanker, which is typically used for refueling other aircraft on missions around the world. The Reddit user who posted the video said the tanker was also carrying some fuel aboard, so it was likely much more heavy than its empty weight of 49 tons. Col. Craig Giles, commander of the 92nd Maintenance Group, told Task & Purpose that the actual gross weight of the aircraft plus the fuel it had onboard was 160,000 pounds, 80 tons of air mobility goodness that his airmen moved all on their own.

No, this was not a newfangled exercise that could help the Air Force beat Russia or China in a possible conflict. Instead, it was an experiment ahead of a special event held every year at Fairchild: the 92nd Maintenance Group Olympics. Like the actual Olympics, competitors at Fairchild put on feats of strength and skill. But unlike the actual olympics, these feats are all related to the fine art of aircraft maintenance. Last year’s events included tossing chocks, the wedges airmen use to keep aircraft from rolling away; pulling power carts through an obstacle course; balancing an egg on a wrench in an egg relay race; and using safety wire to tie bolts together. Though there are some prizes given out for the winners, the main reward is bragging rights, explained Senior Master Sgt. Heather Stanton, a spokesperson for the 92nd Air Refueling Wing.

“It’s a morale event for our maintainers,” Stanton explained. “They work hard but they deserve some fun.”

This year’s games, which are being held Thursday, will feature a KC-135 pull. But since the maintainers wanted to make sure the feat was possible, they conducted a test run on Tuesday that was captured on video, Stanton said. Clearly, it went great. The aircraft is about 136 feet long, and the maintainers appear to have dragged the plane just a bit short of that, judging from the video. But based on how quickly the aircraft was moving, the airmen probably could have kept going if they needed to.

After the Maintenance Olympics were over and after being dropped into a watery dunk tank at the games’ conclusion, Giles, the group commander, told Task & Purpose that the 92nd Aircraft Maintenance Squadron won the KC-135 pull contest by moving the jet 100 feet in 23 seconds. It was a close race: its rival, the 92nd Maintenance Squadron, lost by a mere second. The aircraft maintenance squadron performs the day-to-day maintenance required to launch and recover the aircraft, while the maintenance squadron does more of the back shop, heavier-lift maintenance, Giles explained, but both teams had 50 airmen to pull the jet in the contest.

Though the aircraft pull ended up as a competition, it started out as a thought experiment with potential real-world applications. The Air Force is preparing to fight China in a possible war over the Pacific Ocean, where places to land heavy, expensive aircraft are few and far between, and the airfields themselves may be much smaller than the vast tarmac expanses found at most Air Force bases. That leads to the question: what happens if you end up parking the jet in a tricky spot and need to back out? Giles explained that the KC-135 is usually towed from the front, since the nose landing gear can determine which direction the plane is taxiing, but that may not be an option if you run out of tarmac. Originally, Giles and his team thought it would be useful to try towing a KC-135 from the back, but the experiment expanded into trying to pull the aircraft with just airmen towing the vehicle from the back, which might also be required if for some reason tow equipment is not available.

“We’ve been exploring alternate means of moving aircraft at remote airfields in case we didn’t have a tug, and this was one of the more fun options!” Giles said. “We’ll probably never do this for a real mission, but the procedures and risk assessment … will help in case we need to use a tractor, truck, winch, or manpower sometime in the future.”

Usually ground crews have equipment for towing airplanes, so Reddit users feared what the video might mean for next year’s Air Force budget request.

“Great, now they’re going to get rid of the tugs to save money,” wrote one.

Hopefully Fairchild keeps its tow equipment for the foreseeable future. But this video definitely proves one thing: the old recruiting slogan ‘Army Strong’ is out. The era of ‘Air Force Strong’ has arrived.

This article was updated after publication with additional insight from the group commander.