Christmas in, Christmas out: A holiday deployment story

Here's what it's like when two Christmases bookend a year-long deployment to Afghanistan. 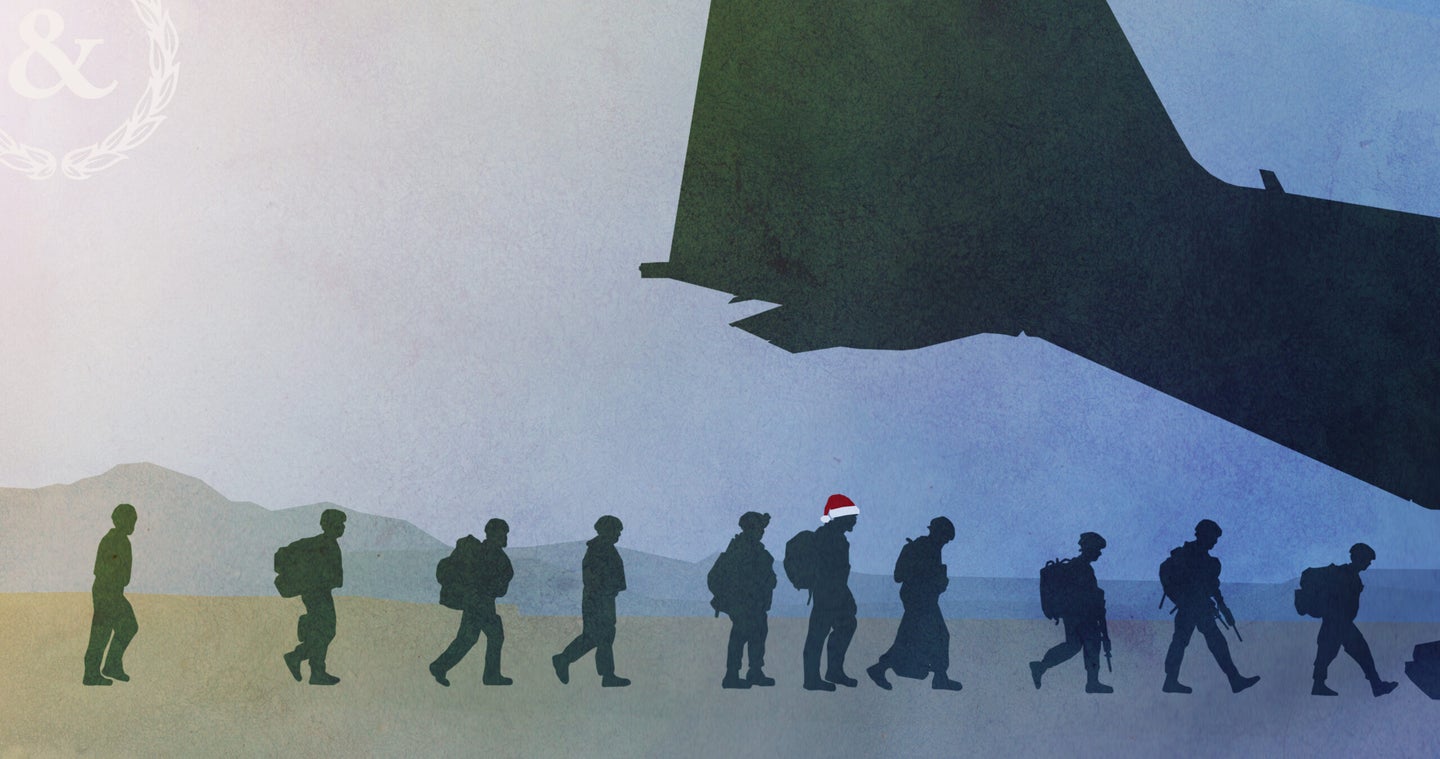 After twenty years of war, there are thousands upon thousands of soldiers, sailors, airmen, and Marines who have spent Christmas in a combat zone. Many have spent multiple Christmas Days overseas over numerous deployments; still, fewer have had the poor fortune of missing two Christmases back-to-back in the days of eighteen to fifteen-month deployments, unexpected extensions, and rapid turnarounds (let us not forget the record-setting 22-month deployment by the Minnesota National Guard’s 1st Brigade, 34th Infantry).

But fewer still, I would wager, can brag of having two Christmases serve as the bookends to a year-long deployment in Afghanistan. This, you see, is exactly what happened to me.

When I tell people this, the reactions are usually the same: “Oh man, that is so sad!“ ”That had to suck!” and “What’s an Afghanistan?” But this is usually met with a shrug, because the honest truth is that holidays in a combat zone barely register beyond a slightly better meal and a few more minutes on the MWR phones, desperately reaching out for a touch of home. Most soldiers are so busy, the significance of the day barely registers — or, at least, that’s how I remember it.

The start of that deployment is clear in my mind’s eye. Dec. 25, 2008. I woke up on the bottom rack of a squeaky bunk bed in the transient facility at Manas Air Base in Kyrgyzstan. While I’m sure the rest of Kyrgyzstan is beautiful, the drab, damp surroundings of Manas (more affectionately known as “Man Ass”) in December makes you feel as though you’d been dropped into a Soviet prison camp or a refugee center for the survivors of a zombie apocalypse. It was a far cry from thumping down the holly-decked stairs back home to see what Santa left under the tree. Not that I still believe(d) in Santa, but I was quite certain he’d never been to Manas.

We were on our third day there, having left Fort Drum on Dec. 22, and were relieved to get word that we’d be flying out for Bagram later in the day. After months of prep and training for our deployment, we were all eager to get on with it.

We spent Christmas Day in the normal fashion for soldiers in that middle space between home and away: watching old movies on laptops, sleeping away the jetlag, and, for the more ambitious, working out. At lunch, we headed down to the DFAC to feast. Knowing that Manas was an Air Force installation, we assumed the Christmas dinner would be top-notch, and the DFAC did not disappoint. There was turkey, ham, mashed potatoes, gravy, yams, rolls, and on and on. Most important, though, were the desserts: pumpkin pie, apple pie, and, of course, those beautiful slices of pecan pie, which were essentially just pre-thawed wedges of crack cocaine. We ate it all and we received no shortage of stink-eyes from the Air Force personnel on whose territory we were encroaching. We did not feel bad, though, because they had soft-serve ice cream machines, and you are not allowed to feel bad for deployed troops who have soft-serve ice cream machines.

Packed to the gills, we returned to our bunks and repacked our gear, anxious to get moving. We were told not to leave the immediate area, so most of us laid out on our bunks and tried to catch a nap. Hours crept by.

This interlude was a weird mixture of anxious anticipation and food coma paralysis as we dwelled on the mission before us and toed the starting line to twelve months of uncertainty. For those of us on our first deployment, we weren’t longing for Christmases past; we were looking out into the unknown, speculating on what was to come, and mentally preparing ourselves for how best not to ass everything up (it is especially important for junior officers, such as I was, not to ass things up, because this is generally what they are known for). We were heading into a region of Afghanistan that had previously seen a minimal footprint by coalition forces. We were told to expect “the wild west.” No one slept.

Finally, we were informed it was “go time.” In Army-speak, this means departure will be sometime in the next several hours and no one truly knows what is happening. That, however, did not stop ten separate NCOs from lining everyone up thirty different times to be counted and recounted. By the time we actually crammed into the aircraft, daylight was fading, which, from where we stood, just meant the Kyrgyzstan-gray was getting grayer.

We packed onto the plane like a living game of Tetris and began our two-hour flight to Bagram Air Base. With a 1.5-hour time change, it seemed we’d landed only a few minutes after we’d left. As we unpacked ourselves from the plane to be counted once more (you know, in case someone fell out on the way), it occurred to some of the seasoned vets among us that the DFACs on Bagram would still be open and would still be serving Christmas dinner. From there it became an urgent rush to get through the never-ending lines of in-processing, so we could ditch our bags in our new transient digs and storm the nearest DFAC by force. Which we did. And it didn’t disappoint.

Flash forward exactly one year and “get me the hell out of here” is all I can think as we stand in line waiting to go through our customs check. We’d spent the last ten days in transient tents on the far side of Bagram as part of a necessary “decompression” time before we were allowed to board our Freedom Birds back home. I can understand and appreciate the need for decompression time for many soldiers, but for guys like me who spent most of our deployment getting yelled at over which font style we selected for the Operations Order PowerPoint slides, it seemed like overkill.

The last year had been long and short all at the same time, a blur of emotional ups and downs spread over 365 days that somehow all felt exactly the same. Our mission in Afghanistan’s Logar Province had been a success, if you could call any mission in Afghanistan a success. Given the metrics for which we were measured at the time, we had done what we came to do. We’d established an ordered presence in the region by constructing Combat Outposts around the districts, we’d built schools and a radio station and began several other infrastructure projects. We’d engaged the enemy and worked endlessly to clear roads of IEDs. We’d even assisted the Afghans in executing their second-ever presidential election (a lot of good that did). Overall, we’d made it much more difficult for the enemy to operate.

We’d also suffered our fair share of heartache and frustration. We lost several friends and battle buddies to IEDs and a vehicle rollover, men taken too young in the name of a mission that made less and less sense each day. For the first portion of deployment, we’d endured the rigors of a toxic leadership climate and its morale-crushing effects. For the second half of the deployment, we endured the loss of mission-critical assets, as they were diverted to search for an AWOL idiot soldier in a neighboring province (you can probably guess who that was). But day in and day out, we pulled on our boots and did our jobs.

Now we were on our way out. We’d left Logar behind and had spent our last ten days in a cycle of bootleg movies, half-hearted workouts, and Green Beans Coffee lines. At first, the naive among us held out hope that ol’ Uncle Sam might push extra hard to get us home by Christmas, but that hope had come and gone a few days prior. Now, on Christmas Day we were finally going home.

True to Army fashion, we didn’t find out we were leaving until the last minute, so with our Christmas dinners still digesting (my third of the deployment) we were hustled from our tents onto buses and driven to the civilized side of Bagram. There we began the lengthy process of disembarking, the only thing standing in our way being a few customs agents bent on making sure we didn’t bring home any $2 bootleg DVDs. Soon we were all checking our watches and it became apparent that, without it ever being vocalized, we had all collectively decided on the importance of being on the plane and in the sky before the clock hit midnight. We had to be out on Christmas Day.

A collective groan rose from the group as a customs agent pulled yet another piece of contraband from some dumb private’s gear, prompting yet another round of searches. More checking of watches. Someone called the customs agent a Grinch. Someone else made a reference to his mother’s loose morals. The customs agent flipped him the bird. There was holiday magic in the air.

It was 10:30 pm when a snake of duffle bag-laden soldiers trudged across the tarmac to a yawning C-17. It was 11:15 pm before the rear ramp closed and the plane began to taxi. It was 11:30 pm when the wheels went up in tandem with the cheer from the soldiers inside. We’d done it. We’d left Afghanistan on Christmas Day, with 30 minutes to spare. We were going home…

Just kidding. We were going back to Manas for two more days of decompression time. Good grief, the Army sucks.

In truth, for most U.S. service members, holidays in a combat zone aren’t a big deal and aren’t really dwelled upon. They are nothing more than an excuse for a meal that’s considered higher quality trash than the normal, everyday trash.

Civilians like to cultivate an image of soldiers sitting, huddled around a Charlie Brown Christmas tree, probably in a dirty foxhole, sadly humming Christmas carols and avoiding eye contact with one another, lest someone sees their tears of despair as they long for home. In actuality, that sad state rarely happens, except maybe in the Marines; in actuality, it never happens because deployed soldiers don’t have time to sit around and be morose. They’re putting in the work so they can get home. There are no holidays on deployment, not really, just as there are no weekends or “after hours.” Every day is Groundhog Day, as they say (except actual Groundhog Day, which is also not observed).

So this year, while you’re sitting around the Christmas tree with your family in the adorable matching pajamas that your spouse makes you wear (because Instagram), share a thought for the service members overseas. They too are wearing matching pajamas, but theirs are camouflage — and they’re out there hustling just for you.

Brett Allen is a former U.S. Army cavalry officer and the author of Kilroy Was Here.

Brett Allen is a former U.S. Army cavalry officer who served from 2006 to 2010, largely with the 3rd Squadron, 71st Cavalry Regiment of the 10th Mountain Division. He's the author of several short stories and a novel based loosely on his 2009 deployment to Afghanistan. Contact the author here.