Tanks for the laughs! 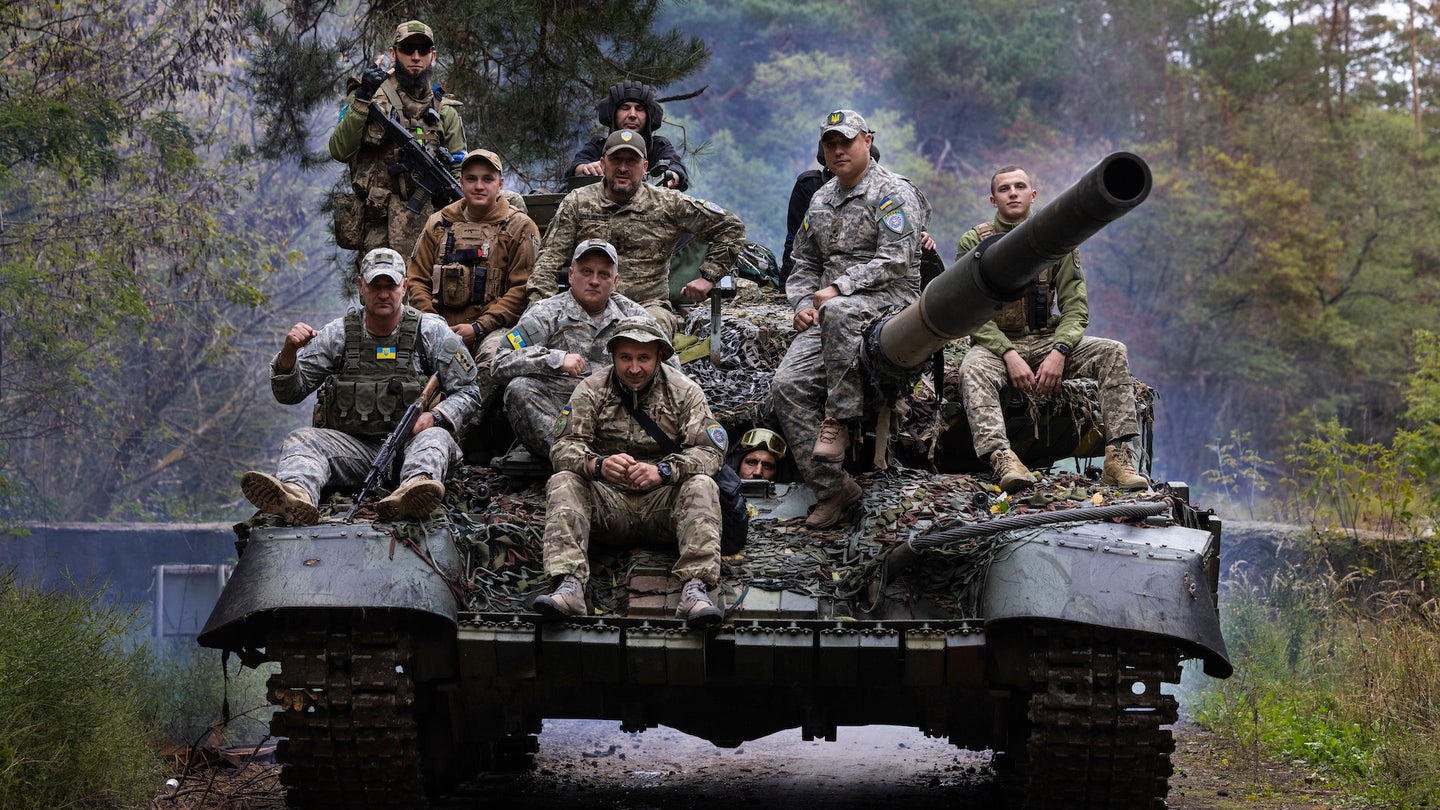 Ukrainian troops ride upon a repaired Russian tank in a wooded area outside the city on September 26 2022 in Kharkiv, Ukraine. Mechanics are repairing captured Russian tanks that were damaged in battle, so that they can be used by the Ukrainian military against their enemy. (Paula Bronstein /Getty Images)
SHARE

Despite its ongoing war with Russia, the Ukrainian military is only growing larger and larger — and not just thanks to the massive influx of aid from Western countries.

The British Ministry of Defense reported in an intelligence update on Friday that Ukrainian troops had likely captured “at least” 440 Russian tanks and an additional 650 armored vehicles, adding that “over half of Ukraine’s currently fielded tank fleet potentially consists of captured vehicles.”

Those tank capture numbers line up with estimates from the open-source research group Oryx, which suggests based on visual evidence that Ukrainian forces have likely captured some 457 tanks since the beginning of the Russian invasion in February.

“Re-purposed captured Russian equipment now makes up a large proportion of Ukraine’s military hardware,” the MoD said. “The failure of Russian crews to destroy intact equipment before withdrawing or surrendering highlights their poor state of training and low levels of battle discipline.”

Ukraine has been snagging Russian tanks since the start of the invasion, forcing the latter to turn to ancient armor to even out the battlefield losses despite the fact that it started with a significant firepower advantage over the former.

That trend has only accelerated in the last several weeks amid an ongoing Ukrainian counteroffensive fueled by captured Russian weapons. According to a September report in Foreign Policy, a Ukrainian military official stated that Ukrainian forces had captured “over 200” vehicles from retreating Russian forces during a week-long push to recapture Kharkiv Oblast alone.

Using the enemy’s own armor against them may seem like the ultimate Uno reverse card, but it’s worth noting that most of those tanks are, well, old: As Forbes notes (citing Oryx data), the vast majority of the destroyed or captured tanks encountered by Ukrainian forces are decades-old Soviet-designed T-72 and T-80 main battle tanks that require significant repairs to get up and running.

Indeed, despite the influx of billions in foreign military aid from Western countries to Ukraine — including the crucial M142 High Mobility Artillery Rocket Systems, or HIMARS — Ukrainian officials have insisted to allied governments that they believe a fresh batch of fresh and more modern tanks could help turn the Ukrainian counteroffensive “into a tipping point” for the war, as the Washington Post reported in early September.

“Virtually no outside nations have provided tanks to Ukraine” beyond a few hundred T-72s from Poland and the Czech Republic, the Post reported after Ukrainian officials urged the German government to send the war-torn country its older Leopold I tanks.

But a senior U.S. defense official told reporters that supplying American M1 Abrams main battle tanks to the Ukrainian military was “absolutely on the table.”

“In terms of the immediate fight, the tanks that are available that could be provided very quickly with little to no training are Soviet-type tanks,” the official said, “but we’re certainly open to other options provided that the training, maintenance, and sustainment can be taken care of.”

Time will tell whether the U.S. and European allies can continue to funnel heavy weapons into Ukraine to bolster the country’s defense against the Russian invasion at their current pace. But one thing is clear: tank warfare is as relevant as before, even if the Russians are absolutely horrible at it.