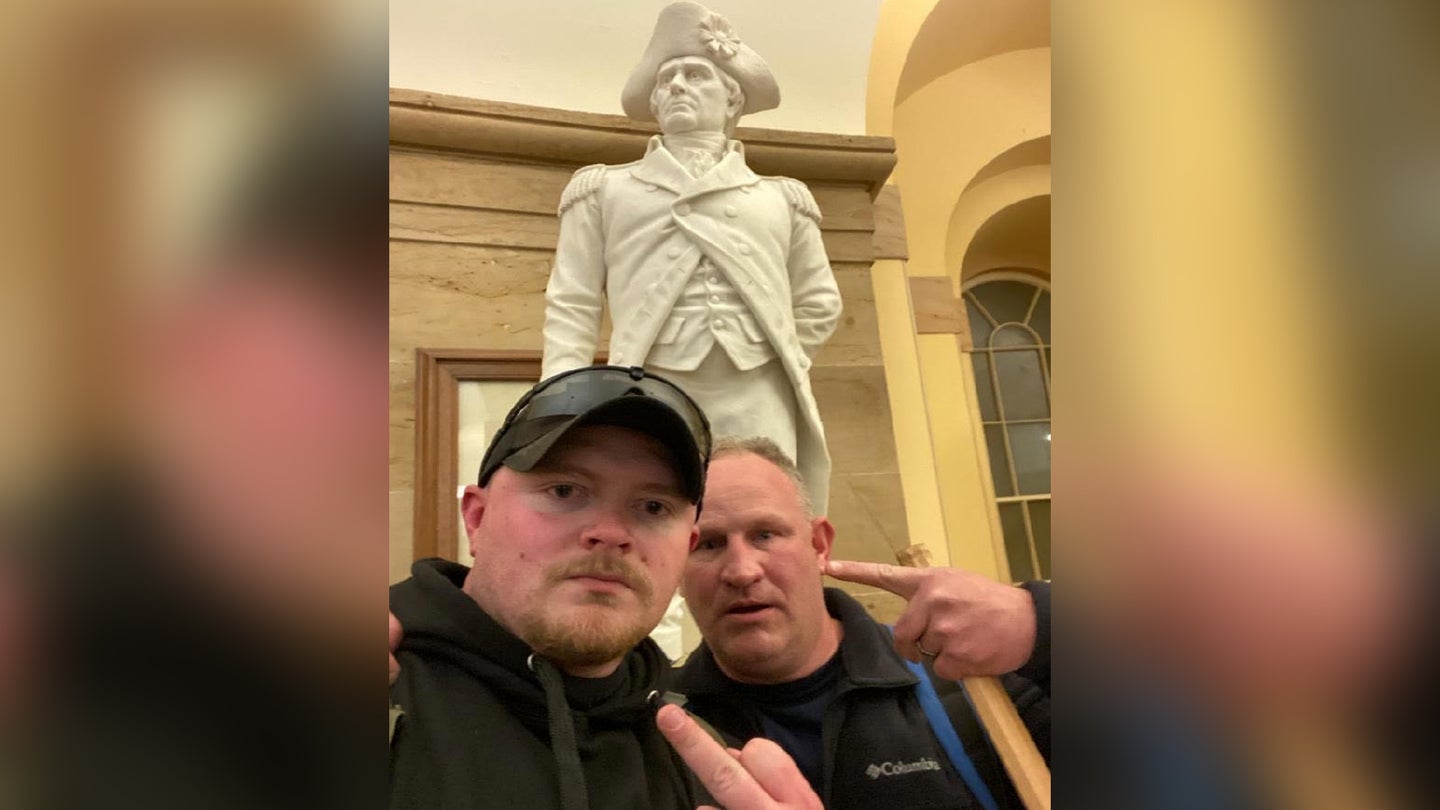 An infantryman currently serving in the Army National Guard and an Army veteran have been arrested and charged in federal court after taking a selfie inside the U.S. capitol during riots on Jan. 6.

Jacob Fracker and Thomas Robertson, both police officers with the Rocky Mount Police Department in Rocky Mount, Va., were off-duty on Jan. 6 when they were allegedly part of a pro-Trump mob that stormed the U.S. Capitol building. They were both arrested and charged in federal court on Tuesday with one count of knowingly entering or remaining in any restricted buildings or grounds without lawful authority, and one count of violent entry and disorderly conduct on Capitol grounds, according to a Justice Department press release.

Fracker is currently a corporal in the Virginia National Guard, according to a Guard spokesman, who added that Fracker is not currently on duty in Washington, D.C., where guardsmen from six states, including Virginia, are responding to assist with inauguration security. Robertson is an Army veteran who was wounded in Afghanistan. He served for five years including a 15-month deployment to Iraq, according to a Daily Beast report. Army and Guard officials have not yet provided full service details in response to a request from Task & Purpose.

According to the complaint, Robertson was quoted on social media as saying “CNN and the Left are just mad because we actually attacked the government who is the problem … The right IN ONE DAY took the f***** U.S. Capitol. Keep poking us.” The two men took a photo inside the Capitol in which Fracker appears to be flipping off the camera while standing in front of a statue of John Stark.

Fracker, a K9 officer who joined the police department in 2017, allegedly said in a now-deleted Facebook post: “Lol to anyone who’s possibly concerned about the picture of me going around… Sorry I hate freedom? …Not like I did anything illegal.” Robertson, Fracker’s platoon sergeant, also claimed “he and Fracker did nothing illegal,” according to the Roanoke Times, and said they were allowed in by Capitol Police who “served them water and told them to stay within cordoned areas, which they did.”

Robertson admitted posting the photo to Facebook and sending it to colleagues at the police department, according to the complaint.

The men posted elsewhere on social media about the Capitol riots. According to the complaint, Fracker wrote on Facebook that he “can protest for what I believe in and still support your protest for what you believe in” to “anyone who’s possibly concerned about the picture.” And Robertson posted to Instagram that he is “f****** PROUD” of the photo because it “shows 2 men willing to actually put skin in the game and stand up for their rights.”

“If you are too much of a coward to risk arrest, being fired, and actual gunfire to secure your rights, you have no words to speak I value,” Robertson wrote on Instagram, according to the complaint. “Enjoy your feel good protests and fame.”

According to the Roanoke Times, Rocky Mount Police “said it notified federal authorities” of Robertson and Fracker’s presence during the Capitol riots and placed both on administrative leave. A spokesman for the Virginia National Guard said the Guard will “conduct an investigation into the matter, and we will be able to release more information when that is complete.”