Training for the next big war is thirsty work, especially if you're taking part in the largest NATO military exercise since... 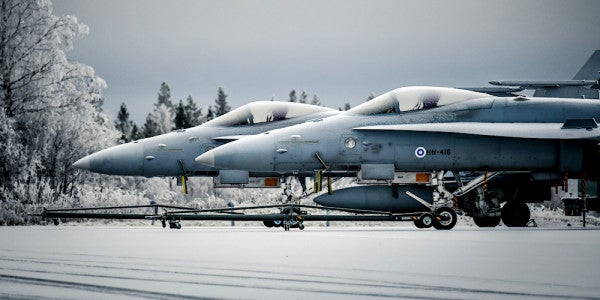 Tornion Panimo, a Finnish brewery in the country's northern region of Lapland, whipped up a 1,000-bottle batch of specialty 'Peacemaker Arctic Pilsner' just for NATO troops roughing it as part of Trident Juncture 2018, NewsNowFinland reports, with “an extra 12,000 more liters” (roughly 33,000 bottles) ready to ship out “in case of emergencies.”

“I said we need to get this beer as quickly as we can to Norway, and it has to carry a peaceful message. If these people run out of beer, they’ll get really angry and nobody knows what could happen,” Tornion Panimo chief Kaj Kostiander told NewsNowFinland. “We really care about our Norwegian neighbours!”

While only 600 Finnish military personnel are among the 50,000 troops participating in Trident Juncture, the Finnish Air Force announced in October that the exercise's air operations “take place mainly in the airspace of Norway and Sweden,” with air forces deployed in support of the 150 aircraft participating in the exercise operating out of four air bases in Norway, Kallax Air Base in Sweden — and the strategically critical Rovaniemi Air Base just outside the capital of Lapland.

“People in Lapland have very positive views about the military cooperation involving Finland, Sweden, Norway — and also the rest of the NATO countries,” Capt. Ilkka Pönkänen, a Finnish Defense Forces reservist who works in marketing and advertising, explained to Task & Purpose

But while the brewery's close proximity to the Rovaniemi Air Base an actual boon for thirsty air forces from around the world, delivering “thirst aid” to personnel based elsewhere may prove tricky.

Norway may be the host country for Trident Juncture, but it is not a European Union member state, which will pose a “small logistical problem with the Norwegian customs authorities concerning the fast delivery of the beer to the exercise troops,” Pönkänen said.

“I actually had one beer export contact in Norway before, and I have a wide network of friends,” Kostiander told NewsNowFinland of delivery plans. “I messaged to them immediately, and I got more contacts, and trying to find out how to quickly get the beer to Norway.”

“We have a cooperation with a brewery in Luleå who already imports our beer, and we agreed we could send some to them immediately,” Kostiander told NewsNowFinland.

beer
finland
How The Other Half Fights
mandatory fun
NATO