It was the thing of lore. Some doubted that it existed. But the true believers were right: The Fighter Pilots... 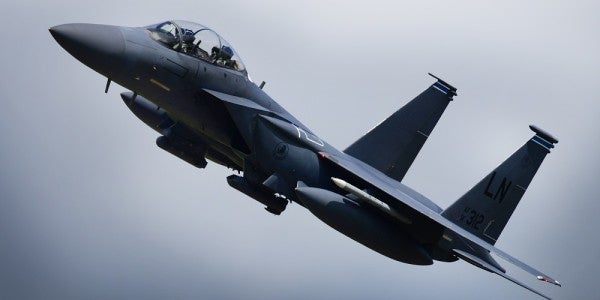 It was the thing of lore. Some doubted that it existed. But the true believers were right: The Fighter Pilots Bar in the Pentagon exists – and Task & Purpose has seen it.

Yes, your friendly Pentagon correspondent has seen the bar with his own eyes. Granted, this reporter is not Hans Blix, so this story will not include a detailed inventory of what beverages are available there, but this correspondent can confirm that the fighter pilot watering hole is the thing of splendor that witnesses have claimed it is.

Our story begins on the afternoon of July 3. Most Pentagon employees had gone home. Those who remained were engrossed with the England vs. Colombia soccer match. Your reporter was working on a story that simply refused to come out right. It was only 300 words long – and every single word sucked.

Then a chance encounter with two colleagues changed everything. For their own protection, Task & Purpose will refer to them by pseudonyms that will make it impossible to determine their true identity.

This reporter had recently discovered that the Air Force has a legendary bar in the Pentagon just for fighter pilots. Many readers claimed after publication that the bar was in fact real, complete with a grimy popcorn machine that would have roused the EPA’s wrath in previous administrations.

Yours truly may have never known the truth had fate not intervened. One of this reporter’s colleagues, whom we shall call “Sharp Dressed Man,” ran into your favorite correspondent and volunteered that he knew the exact location of the Fighter Pilots Bar – although he had not been there in five years. “Nancy Drew,” a second colleague, suggested we pay the bar a visit, and off the three of us went into the deep, deep, deepest bowels of the Pentagon.

Sharp Dressed Man led the way – swearing this reporter not to reveal the winding route to the second most secret Air Force location next to Area 51. Nancy Drew provided moral support as this reporter’s faith in finding the legendary bar waned.

We wandered our way for 40 years (more like 15 minutes) as Sharp Dressed Man looked for a cactus that was supposed to mark the place where fighter pilots bang on the wall to be admitted to the bar. Unfortunately, the cactus had disappeared. It seemed we were doomed to fail.

But suddenly Sharp Dressed Man spied an airman and watched him turn down a nondescript corridor. This was it, he said with glee. We had found the place.

Your reckless Pentagon correspondent went up to a door behind which the bar supposedly stood and rang the bell. Nancy Drew and Sharp Dressed Man fled as if the rock had been rolled away from Christ’s tomb.

An Air Force officer opened the door and your correspondent said: “Hi, I’m with Task & Purpose and I am looking for the Fighter Pilot’s Bar. Am I in the right area?”

The officer – whom T&P; will not identify as to not endanger any of the Templars of the tap – smiled. Perhaps he had been expecting this reporter for centuries. He let your correspondent in and led him right to the bar.

Words cannot describe the scene, but this reporter will try: Pilots’ helmets and dummy Advanced Medium-Range Air-to-Air Missile hung from the ceiling; a sign reads “Fighter Pilot Mafia,” and there was the wooden bar itself, gleaming with a sheen that can be viewed from space.

Your correspondent only spent a few seconds in the presence of the bar, so there was no time to write detailed notes about the magnificent scene, but rest assured that it looks as close to fighter pilot heaven as one can get in corporeal existence.

The officer, who had read T&P;’s last story about the Fighter Pilots Bar, assured this reporter that it is no myth. Indeed, no myth could do it justice.