This Is How I Inadvertently Angered The Pentagon Parking Gods

It was the second parking citation that did it. Your friendly Pentagon correspondent realized he wasn’t up against just anyone.... 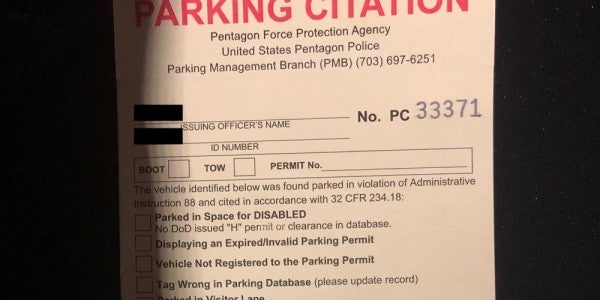 It was the second parking citation that did it. Your friendly Pentagon correspondent realized he wasn’t up against just anyone. Oh no. This wasn’t the work of an Officer Obie. Al Pacino from “Heat” had clearly joined the Pentagon police with one mission: To take me down.

Let’s back up. Years ago, your humble narrator had a Pentagon parking pass and life was sweet. This reporter and the good people of the Pentagon’s Parking Management Branch co-existed peacefully, like two dolphins frolicking off Key West. But as time passed, this reporter starting working out of Washington, D.C., and no longer qualified for the beloved parking pass. (The dolphins suddenly had nowhere to frolic anymore.)

But the noble parking lords restored balance to the universe in January when they allowed this reporter to use press parking on one extremely reasonable condition – your friendly correspondent has to provide his license plate number to Pentagon police each week. Life was sweet again … until this Pentagon reporter suddenly became an outcast.

One night last week, yours truly found a parking citation under one of the windshield wipers of the vaunted Schogol-Mobile. To put this event in context: Pentagon parking had always been this reporter’s refuge from the cold and darkness that is the rest of the world. What had changed?

Your rather slow correspondent had already surmised that the wonderful defense official who appeases the parking gods each week was out sick, so he asked a trusted ally named – whom we shall call “One-Eyed Jack” – to let the Pentagon police know the Schogol-Mobile would be in press parking this week.

The word must not have reached the Serpico of the Pentagon parking beat, who saw that yours truly did not have a pass and wrote the first citation. No problem. All of this could be cleared up at Parking Management Branch. But this tardy reporter showed up at their office at 10:47 a.m. – two minutes after they closed early that day. (This is Washington, after all.)

Jack told this beleaguered correspondent to chill. Pentagon police would not issue another parking ticket while the first citation was under appeal. Your naive narrator tried to trust the system; however, the parking gods’ thirst would not be slaked.

A Pentagon police officer clearly felt the Pentagon press parking lot was not big enough for the both of us. He was Doc Holliday and I was his Huckleberry.

It was time to talk to a man whom I will call “Hawk.” A grizzled Pentagon veteran from back in the day. Having survived Pentagon parking purgatory before, Hawk knew the score.

Don’t fear the man, Hawk said. Talk to the man. (Hawk was busy and the Pentagon beckoned, so we parted.)

When dawn broke the next day, your fearless narrator knew exactly what he had to do: Surrender. (This is also known as the “French strategy.”)

Those of you expecting this story to end in a “Few Good Men” showdown have not grasped that this reporter is about 450 feet below the bottom of the power pyramid. And your humble narrator remembers the time his mother told him about advice she received from his father: “Elizabeth, you are the Scottish at the battle of Culloden: You hike your kilts up, play your bagpipes loud and get mowed down. I am how Jews have survived for 5,000 years: I keep my head down; I wait until someone has won; and then I shake his hand and say, ‘Congratulations! I was on your side the whole time.’”

So you can bet that when the hero of our story walked into the Parking Management Branch office, this correspondent looked every bit as contrite as a Basset hound caught rummaging through the trash can.

Thanks be to the parking gods, the extremely nice people in the office took pity upon this semi-Semitic Sadr stand-in, and so far the Schogol-Mobile has escaped being booted. The moral of this story is: Don’t fight the power when you have no power to begin with.

Tune in next week for the further adventures of Hawk, One-Eyed Jack, and the powerless Pentagon correspondent.

SEE ALSO: Inside The Splendor And The Glory Of The Pentagon’s Secret Fighter Pilot Bar