This Powered Exoskeleton Is Here To Make Ruck Marching A Breeze 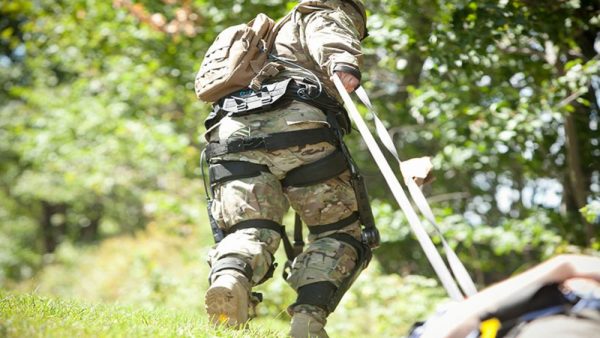 In 1959, Robert A. Heinlein published his iconic sci-fi military epic Starship Troopers, popularizing the concept of exoskeleton body armor that allows soldiers to carry more and move further and faster. Now, after many years of trial and error, Lockheed Martin is finally sending a pair of robot legs known as ONYX to the Army for field testing.

The 10th Mountain Division has been selected as the first Army unit to test out the ONYX lower body exoskeleton. The ONYX is a powered electro-mechanical system controlled by a computer that calculates how to best keep the load off when you are humping through the bush. According to Lockheed, “ONYX ultimately reduces the energy needed to cross terrain, squat, or kneel,” by adding torque at just the right time.

Previous exoskeleton prototypes, such as Lockheed’s Human Universal Load Carrier (or HULC system, because obviously), encompassed the entire body. The ONYX, however, attaches only to the lower body, making it significantly lighter. Slimming down to a leg-based system may also greatly extend battery life, at last solving the power issues that have hobbled exoskeleton development for years.

Lockheed is now in the process of ruggedizing the ONYX for the harsh conditions that grunts will encounter in miserable places like Afghanistan and Fort Polk. This involves waterproofing the system and upgrading it with faster actuators, which allow the joints to move like a knee.

It’s a beautiful day at the Pentagon to discuss #ONYX. #ONYX was developed for the @USArmy to help soldiers carry mission-essential equipment for longer periods of time. https://t.co/LiEQYwVDL7 pic.twitter.com/K165mn2a6H

Exoskeleton technology has gotten off to a clunky start, but that’s to be expected. Consider the evolution of night vision devices, which were just a notch above useless when they debuted during World War II. By the early 1990s, American military strategy practically revolved around our ability to fight around the clock. So while the ONYX is a far cry from the power armor Heinlein envisioned, it is certainly a step in that direction, and that in itself is significant.

The future power armor, or 'suits', that fueled the military against the invading aliens.Warner Bros