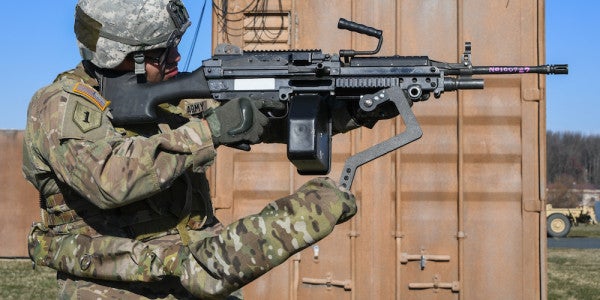 We've been obsessivelytracking the Army's work on the “third arm” exoskeleton due to its delightful resemblance to the mechanical harness for the M56A2 Smart Gun from Aliens, and lo, our patience has paid off: After months of tweaks by the Army Research Lab, soldiers are finally giving the lightweight appendage a workout.

The Army Research Laboratory on May 29 published footage of soldiers scrambling through an urban training exercise site at Aberdeen Proving Ground in Maryland with 22-pound M249 and 25-pound M240B machine guns affixed to the end of their harnesses, a step up from the 20-pound defensive shield that the Army initially started testing last year. According to the Army, one sergeant rocking the third arm with a carbine “dove into a prone fighting position from a sprint … the Third Arm provided immediate stabilization to improve marksmanship for the soldier.”

As they did with an initial test group back in 2017, the soldiers described the harness as a major boon, reducing fatigue, improving accuracy and boosting overall lethality. But the third arm still has some kinks to work out.

“We get comments from soldiers who tell us different things about the way it feels on their body… about the way it redistributes the load,”ARL engineer Dan Baechle said in an Army release. “Some like it, some give us tips about the ways it could be improved, and we're using that input to improve the device and improve the design so that it not only works well, but it also feels good.”

But get amped: Apparently, the third arm is getting enough attention from senior DoD officials that it may head downrange sooner than expected. “It's been getting a lot of interest higher up in the Army, but also online with some of the stories that have come out,” Baechle said. “We're using some of the interest to help motivate further development of the device.”

And now, your obligatory Aliens GIF: