‘Be Courteous With Fireworks’: Veterans Ask A Community To Help Those With PTSD

The bright lights and booming sounds of fireworks on the Fourth of July can be tough for veterans suffering from... 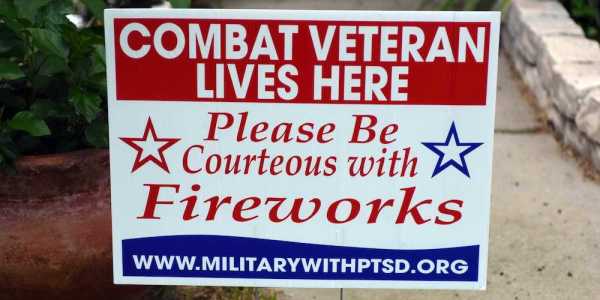 The bright lights and booming sounds of fireworks on the Fourth of July can be tough for veterans suffering from post-traumatic stress disorder.

Granado spent six years in the Marines, serving in the war in Vietnam. He then spent 32 years in the Army. He's a Desert Storm veteran who has also done one tour in Iraq and three tours in Afghanistan.

“The last couple years have been difficult for me,” Granado said of Fourth of July celebrations. “This year, I thought I'd try to do something.”

Granado has teamed up with a local veterans organization, Marines: Central California Veterans, to make signs that can be posted in front of houses that let people know a military veteran lives there. The signs read: “Combat Veteran Lives Here. Please be courteous with fireworks.”

“The sign politely tells the neighbors to help me out,” Granado said. “I've been diagnosed with PTSD. It's a fact I'm dealing with. Sounds and light can be daunting for me. They bring back some of the memories. Talking to other veterans, they've had the same issues.”

The signs can be purchased from the MCCV for $10. The MCCV will also let veterans borrow the signs for the Fourth of July. They've offered to have volunteers come post the sign and then they will pick the sign up after the holiday. Veterans wishing to purchase or borrow a sign can call MCCV Vice Commander Jesse Leal at 209-829-5121.

Leal, 49, has already seen the sign posted in front of his home bring awareness to his neighbors.

Leal, who also suffers from PTSD, struggled last year on the Fourth of July when there were fireworks going off in front of his house. Leal said he didn't want to be confrontational but did ask his neighbors if they could stop the fireworks. Leal says the fireworks did stop but only briefly.

“I didn't want to be a bad neighbor,” Leal said. “I just put ear plugs in and tried to sleep. This sign does let people know I am a veteran. I suffer from PTSD. I have the sign up in the front yard and I've had neighbors come up to me and apologize about the fireworks. They said they didn't know I was in the military. I appreciate that they came by and apologized. They said they will go somewhere else this year to do fireworks. It lets neighbors know.

“To me, I think the signs are a great idea.”

The loud noises and bright lights of fireworks can trigger some bad memories for military veterans.

“I've had dreams at night and then I wake up and realize it's only fireworks,” said Atwater's Frank Paredes, who is a 98-year old World War II Veteran.

Members of the MCCV posted a sign in front of Paredes' home on Tuesday evening.

MCCV coordination and co-founder Ray Villegas, 60, says they aren't trying to keep people from having fun with fireworks.

Villegas says they have already had veterans in Madera and Fresno order signs.

“A lot of times, Vets will stay inside and turn their TV up loud on the Fourth,” Villegas said. “They keep to themselves. When Art Granado brought the idea for the sign we jumped out immediately because some of us have the same feeling. No, we're not saying don't celebrate. We're just asking people to be courteous, be aware. We want people to continue celebrating. That's what the Fourth of July is all about.”