How Many Troops Did The Pentagon Boot Out Over Botched Drug Tests?

The Department of Defense announced a two-day pause to court-martial and administrative separation proceedings involving the wrongful use of controlled substances,... 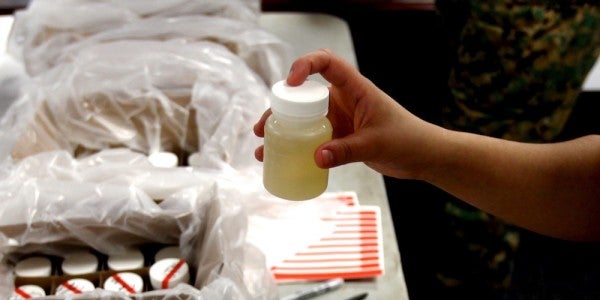 The Department of Defense announced a two-day pause to court-martial and administrative separation proceedings involving the wrongful use of controlled substances, due to worries over the integrity of the lab tests involved — a move that could also cast a pall over past drug-related dismissals, Military Times reports.

The Pentagon's pause comes just over a year after every U.S. military base implemented brand-new drug testing procedures to test for substances beyond the traditional marijuana, cocaine, and LSD, to include opioids like oxycodone and synthetic cannabinoids. And it raises an interesting question: How many active-duty U.S. troops had their careers ended over some loose piss? Something tells me we'll never know the answer.

Read the ADFTL study report below: