Up To 20,000 Migrant Children Could Be Sheltered On US Military Bases Starting Soon

The Defense Department has been asked to find room on military bases to accommodate up to 20,000 unaccompanied migrant children,... 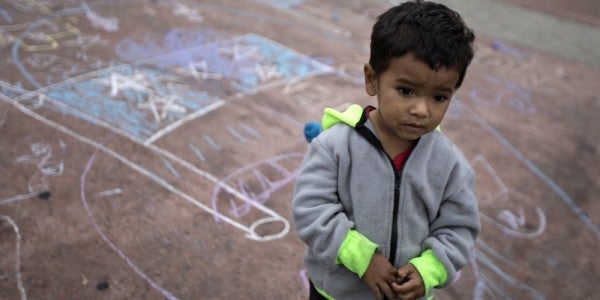 The Defense Department has been asked to find room on military bases to accommodate up to 20,000 unaccompanied migrant children, said chief Pentagon spokeswoman Dana White.

The request came on Thursday from the Department of Health & Human Services, White said in a statement. HHS has visited three military bases in Texas and one in Arkansas, but that does not mean that any of the children will be lodged there, she said.

“Secretary Mattis' guidance has been clear: that the DoD will support our federal partners,” White said.

The Washington Post first reported on Thursday that the Pentagon had received the request to shelter the migrant children on military bases. A U.S. official told Task & Purpose that construction on facilities for the children could begin in early July.

Defense Secretary James Mattis told reporters on June 20 that the U.S. military has housed refugees before.

“We have housed people thrown out of their homes by earthquakes and hurricanes,” Mattis said. “We do whatever is in the best interest of the country.”

“I will continue to do everything I can to stop this administration’s inhumane policy toward children and their families,” Smith, of Washington, said in a statement to T&P.; “It’s unconscionable that we are even in this position in the first place and we must hold the federal government accountable for the care of children within their custody.”

Separately, the Defense Department is detailing 21 military attorneys to the Justice Department for up to six months to prosecute illegal immigrants, with a focus on misdemeanor improper entry and felony illegal reentry cases, the Pentagon confirmed on Thursday.

President Trump recently reversed a Justice Department policy that required migrant children to be separated from their parents. The backlash against holding young children in cages was so intense that some governors vowed not to send National Guardsmen from their state to support the Department of Homeland Security’s efforts to guard the U.S./Mexico border.

“We are fortunate to have the support of many governors who care about national security, preventing entry of gang members, illegal drugs and protecting the American worker,” DHS spokeswoman Katie Waldman told T&P; in an email.