It’s Time To End The Veteran War On Independence Day

The “support our troops no matter what” mentality permeates all facets of our society and is especially prevalent on Independence Day. 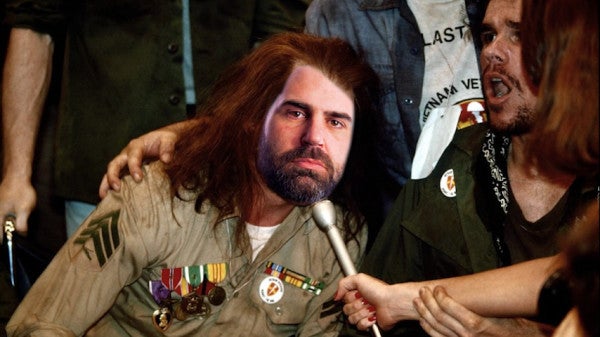 Remember the guy in your platoon who was a total scumbag? The one who used to steal from other people and always make up shitty excuses for his failures? Well, that guy eventually became a veteran and his general scumbag disposition never changed. To make matters worse, he returned to a society that worships veterans blindly, where he now has the luxury of masking his scumbaggedness by pulling the “vet card” whenever anybody questions why he sucks so much.

This is when the veteran community needs to intervene and police itself, as we saw last year when Captain Combat Veteran famously beat the hell out of some dude for cutting him off on the highway and chalked it up to his combat-induced post-traumatic stress disorder. Fortunately, his former first sergeant jumped in to explain to people on the internet — many of whom had rushed blindly to Cpt. Combat Veteran’s defense — that our tormented American hero had, in fact, never been in combat.

We need more of that. If a person is being a dick, they’re being a dick. Their veteran status is irrelevant and those who make it an issue are part of the problem.

The “support our troops no matter what” mentality permeates all facets of our society and is especially prevalent on Independence Day. It is on that day, in recent years, that we’ve witnessed the emergence of one of the most egregious notions to ever plague this beautiful country: The expectation that Americans are supposed to refrain from celebrating the birth of our nation because some veteran put a sign in his yard that looks like this:

Shooting fireworks on the 4th of July is as American as baseball, apple pie, and unwinnable wars. Yet these vet-flakes (veterans who are also snowflakes, because the two are not mutually exclusive) are making the declaration that, because they’re so special, their neighbors need to change their behavior for them. It’s not just insulting to those neighbors; it’s insulting to the overwhelming majority of veterans out there who aren’t self-involved babies, because — understandably — any person with no military background who sees something like that is going to assume we’re all cuckoo for Cocoa Puffs.

Nothing says, “I’m an asshole” like telling hard-working Americans they can’t celebrate the very same freedoms that everyone credits you with fighting for. Look, it’s okay if you’re not comfortable with fireworks, but keep it to yourself. That’s like an alcoholic showing up to a wedding and asking everyone not to do the one thing everyone loves doing most at weddings, which is get fucking drunk.

Of course, the vast majority of veterans would never dream of sticking one of those bullshit signs in their yard. To them I say, have a fun and happy Fourth of July! Enjoy all the booze, food, fellowship, and loud bangs you can handle. As for those who’d rather reign with an iron fist from their thrones of self-pity, here is a list of things you can do this Independence Day instead of ruining it for your neighbors. Also, fuck you for your service.