“It gives you an extra nudge. You see what you’ve done, that you have helped the infantry, and you just want to keep on going." 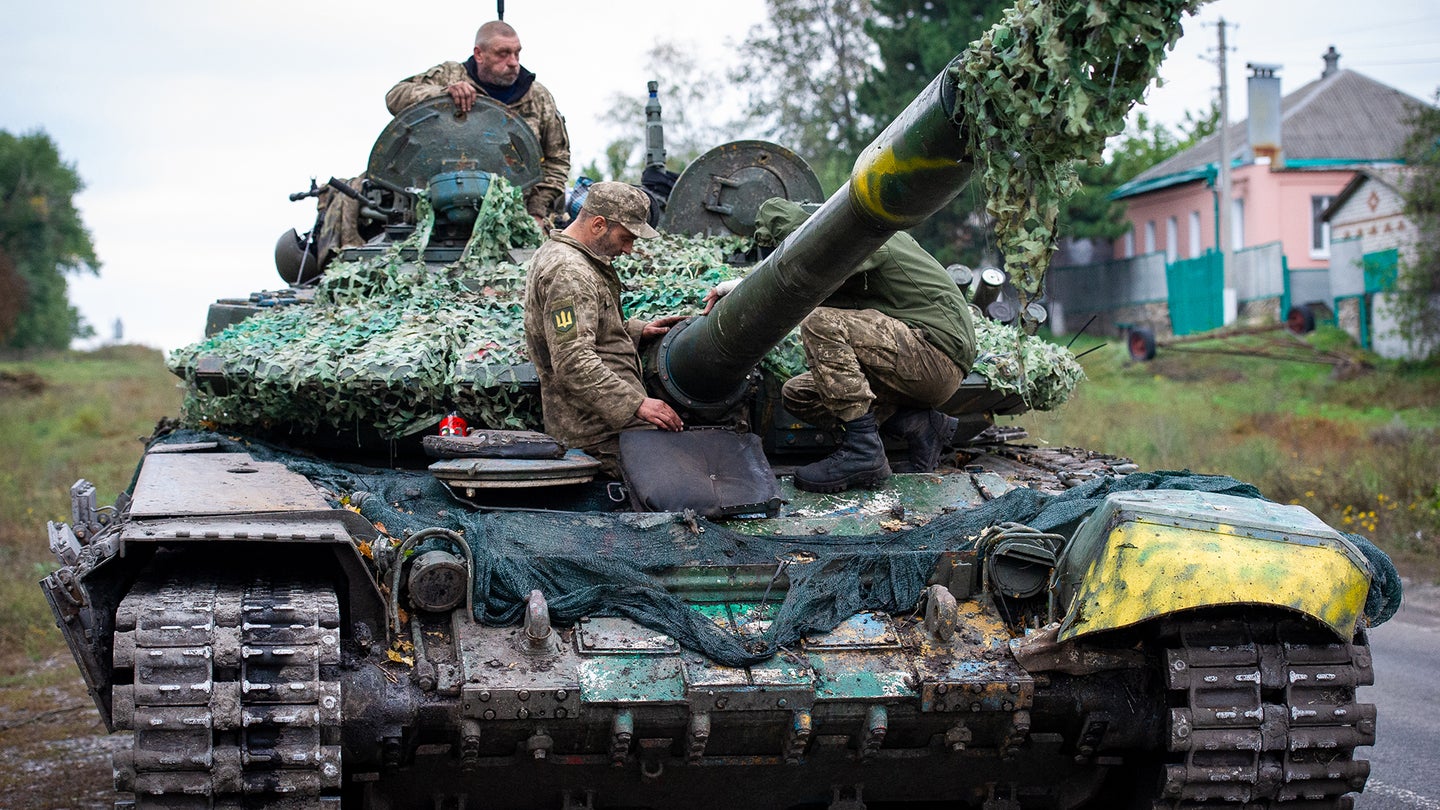 Ukrainian soldiers make adjustments to a captured Russian T-72B tank, as they drive it toward the northeastern Kharkiv region frontline on a road to Izyum, Ukraine, on September 28, 2022. (Scott Peterson/Getty Images).
SHARE

In the trenches, fields and streets around the Ukrainian city of Bakhmut, Ukrainian tanks are delivering brutal strikes on Russian troops, but not in direct face-to-face combat. Instead, the old T-64 tanks are being used as indirect artillery, with targeting handled by drones or combat helicopters.

Radio Free Europe/Radio Liberty filmed some of the tank crews utilizing their armor to bolster Ukrainian artillery.  It’s a combined arms tactic that is netting successful strikes, even as both sides fail to break through the other’s lines. If Russians try to target the tanks, they move to a different position and resume barrages.

“Camera guys send us video compilations so we can see our day’s work,” a tanker going by “Kipish” told RFE/RL.

“It gives you an extra nudge. You see what you’ve done, that you have helped the infantry, and you just want to keep on going,” he added.

The fighting around Bakhmut — located in the Ukraine’s eastern Donbas in the breakaway Donetsk region — has descended into World War I-style trench warfare, enhanced with modern touches such as weaponized drones and satellite imaging. Fighting escalated in late summer, but in the last three months ground to a dug-in stalemate with heavy artillery barrages destroying the area around Bakhmut. The city remains in Ukrainian hands, but it has been one of the few places Russian forces have pushed an offensive after Ukraine launched counteroffensives in the country’s east and south. As a result of the trenches set up, both sides are relatively close to one another, allowing the tank strikes to hit with heavy accuracy.

It’s not a new move. Tanks have been used as indirect artillery throughout the war in Ukraine, particularly early on as Ukraine was outmatched militarily by Russia. During the Iran-Iraq War of the 1980s, which saw widespread trench warfare and failed offensives, Saddam Hussein’s forces dug in their tanks, turning them into pill boxes, rather than as the mobile artillery Ukrainians are fielding.

Russian tanks have also been spotted in use as indirect artillery, but those have not been as old as the ones Ukraine has. Many of the pro-Russian troops fighting in Bakhmut are part of the Wagner Group mercenary firm.

Throughout the war, Ukraine has been outmatched in the amount of tanks it has. However, a supply of anti-tank missiles have helped its forces destroy hundreds of newer Russian tanks. Some that haven’t been fully destroyed were repaired and put into Kyiv’s service. Meanwhile the overall artillery war, with more conventional pieces, is burning through ammunition at a rate not seen since the Korean War. The barrages are so heavy and constant that many of the howitzers and other guns are being damaged from overuse. Roughly a third are off of the field for repairs at any given time.

The tanks remain behind the lines as indirect artillery unless Russian forces send their own tanks to attack Ukrainian positions. One tanker, identified as “Zilizniy,” told RFE/RL that hasn’t happened lately, due to the dangers of Ukraine’s supply of Javelin anti-tank missiles. Russians have only been sending infantry, with artillery and air support, toward Bakhmut. That has the effect of both sides digging in more, neither ready or able to launch an offensive to break through the trenches.