Soldiers named their APC ‘Big Chungus’ because why the hell not

The U.S. Army’s M113 armored personnel carrier is older than the internet, and now one has been named after internet memes. 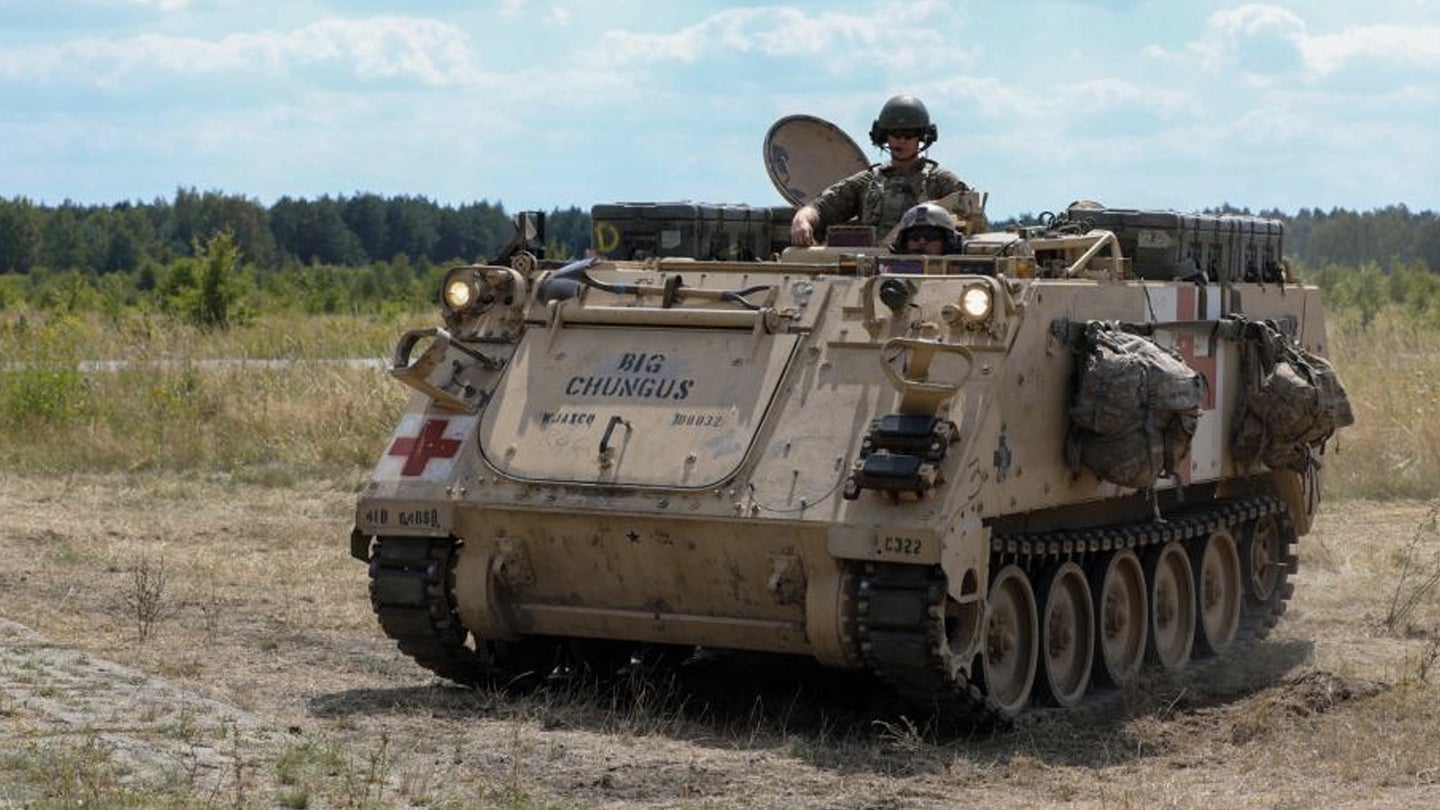 Picture this: it’s the near-future and the U.S. is at war. You’re a young infantryman and you’ve had the misfortune of getting hit in your first battle, but luckily the wound is not serious. You squint as a squat, tracked vehicle rumbles across the mud-churned battlefield to take you and your wounded buddies away from the front lines. Your savior has a name stenciled across its broad metal front. No, it can’t be. Big Chungus? Well that’s just great. Years from now you’ll have to tell your grandkids that their war hero grandparent was saved by an ancient box on wheels named after an internet meme about a fat rabbit.

At least, that’s the vision which flashed through this reporter’s mind upon viewing a recent photo published by U.S. Army public affairs. The photo shows members of the 4th Infantry Division driving an M113 Armored Personnel Carrier ambulance with the words ‘Big Chungus’ stenciled across the front. The soldiers, Spc. Davey Bowden and Sgt. Andrew Knapp, were assigned to the 64th Brigade Support Battalion, 3rd Armored Brigade Combat Team, and they were taking Big Chungus through medical trauma lane training in Skwierzyna, Poland on Aug. 10, according to the photo caption.

Trauma lanes are a bit like obstacle courses for medics where they practice caring for patients under stress. A trauma lane might include medical training mannequins splattered with fake blood and instructors yelling at the participants. This training in Skwierzyna seems to have included at least one M113 serving as an ambulance. First produced in the early 1960s, the M113 has served on nearly every battlefield where the U.S. Army has fought, and many more with the several dozen other countries that operate it. It can carry 12 troops plus a driver and can travel over both rough terrain and down roads and highways at high speed, according to the vehicle manufacturer BAE Systems.

Though the U.S. Army replaced the M113 with Bradley and Stryker fighting vehicles for carrying infantry troops to the fight, the old battle taxi has served in a wide range of support roles. Those roles include as a mortar carrier, a cargo transport, a mobile command post, a mobile smoke generator, a mobile TOW missile launcher and, as demonstrated by Big Chungus, an ambulance.

The M113 has been around longer than the internet has, but now this particular vehicle bears a name born out of the internet. The name ‘Big Chungus’ refers to a plus-size Bugs Bunny cartoon rabbit who first appeared on Merrie Melodies in 1941, according to Know Your Meme. A video game journalist named Stephanie Sterling had used the term ‘chungus’ for a few years in the early 2010s, and then in 2018 a Reddit user called GaryTheTaco posted an image of the obese Bugs Bunny labeled with the words ‘Big Chungus’ as if it were the cover for a PlayStation 4 game. As things on the internet tend to do, the meme took on a life of its own, and before you knew it there was a brief cameo of Big Chungus in the 2021 film, Space Jam: A New Legacy.

Nowadays the term ‘chungus’ or ‘big chungus’ can refer to anything big or chunky (or ‘chonky’ as the Internet sometimes says). A squat M113 would fit the bill, but believe it or not, the M113 in Poland is not the first U.S. Army equipment to bear the ‘Chungus’ name. In October 2019, the Army wrote a press release about CHUNGUS, an M777 howitzer operated by Battery C, Field Artillery Squadron (Steel), of the 3rd Cavalry Regiment.

“‘CHUNGUS.’ It represents more than a name. It’s Pride. It’s the King of Battle!” the Army wrote. And yes, the howitzer’s name was in all caps.

The main U.S. Army Instagram account also posted a close-up of the business end of CHUNGUS with the name prominently stenciled on it. We can only hope ‘Big Chungus’ achieves similar fame.

Forget ‘Army Strong,’ ‘Be all you can be,’ ‘Army of one,’ or any of the other mottos America’s oldest military service has used in the past. Just plaster the latest dank meme the youths are Insta-tiktok-twitching on a tank and call it a day.