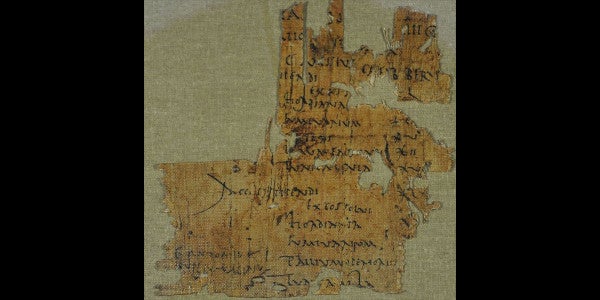 A 1,900-year-old scrap of papyrus proves that while warfare may change, the bureaucratic bullshit that comes with military life does not.

A payslip belonging to a Roman auxiliary soldier, posted on Twitter back in March 2019 by archaeologist Joanne Ball, shows that the imperial grunt was left penniless immediately after getting paid once the military recouped expenses for food, equipment, clothes, and the like.

As it turns out, getting screwed over by the green weenie is a time-honored tradition that dates back centuries.

Fragment of a payslip belonging to Gaius Messius, a #Roman auxiliary soldier in the Legio X Fretensis, found at Masada, dating to the time of the siege. It shows that most of his pay went straight back to the Army to pay for his food, clothing, & equipment. #RomanArmy pic.twitter.com/yyoEaP0uMa

According to a translation available in the Database of Military Inscriptions and Papyri of Early Roman Palestine, this payslip belonged to Gaius Messius, a Roman auxiliary soldier who likely served in Masada, Israel between 72 and 75 CE.

The document was translated using the excavation reports, Christopher B. Zeichmann, the editor for the database, told Task & Purpose via email.

The receipt itself shows just how much of Gaius’ hard-earned denarii, an ancient Roman currency, went back to the military. Here’s the rough translation:

Gaius Messius, son of Gaius, of the tribe Fabia, from Beirut.

Let’s do a quick tally of that pay slip:

That comes out to 50 denarii — leaving Gaius flat broke immediately after payday.

It’d be one thing if this was a receipt for clay jugs of wine and a new warhorse (at 25% APR, of course) or some sort of punishment for carving a bunch of dongs onto a wall, but having your whole paycheck vanish before you even get to blow it on leave is something else.

“It is interesting to observe how much of his pay went to mandatory expenses: clothing, food, etc,” as the database notes. “He seems effectively penniless after payday.”

Not much else is really known about Gaius, not his unit, though the original tweet cites it as Legio X Fretensis, or his rank, or what became of him. While there were other military papyri found at Masada from around this same time, Zeichmann told Task & Purpose, many of them were “obscure or highly fragmentary.”

We do know one thing for sure, though: The green weenie will outlive us all.