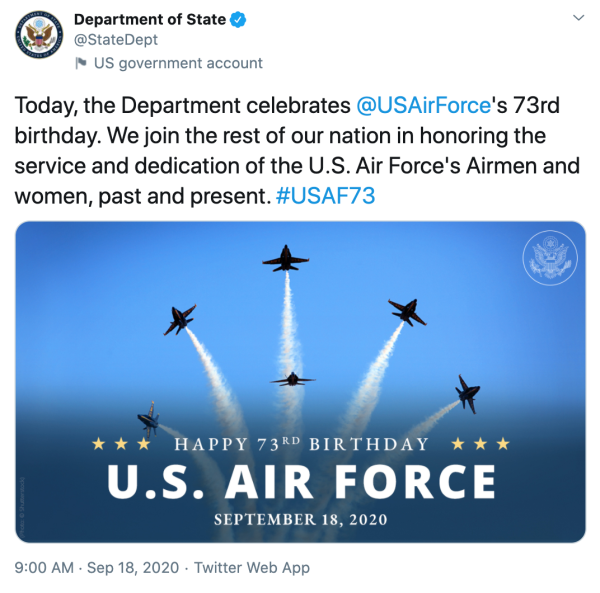 Today, September 18th, marks the 73rd birthday of the U.S. Air Force. While it's a great opportunity to celebrate the accomplishments of a service branch that's no longer the youngest in the U.S. armed forces, it's also a great opportunity to make sure that you actually use a photo of Air Force aircraft to wish the service a happy birthday and not, say, a Navy plane.

This is a tough challenge! And unfortunately, the State Department failed miserably in a now-deleted tweet that featured the Navy's Blue Angels in it's birthday message to the service instead of, well, literally any other Air Force jet:

Look, we get it: social media is hard! In March, the Pentagon tweeted a photo of “tanks” that were definitely not tanks. In May, the Army's chief of staff shared a video of a German Army tank when he meant to share an M1 Abrams. It's not like there's a huge database of explicitly-labeled photos to search through or anything. And just this week, President Donald Trump's reelection campaign dropped an ad that featured Russian soldiers and aircraft instead of American troops.

But for an executive department that, among other things, approves the sales of billions of dollars in military equipment to foreign countries every year, you'd think that communication staff would have the attention to detail to tell the difference between an Air Force jet and an aircraft that very clearly has the words 'NAVY' painted on it. Then again, perhaps the State Department has other things to worry about given the United States' plummeting reputation among its international partners and allies.

Anyway, the jokes abound, but at least this facepalm-worthy flub gave us this gem of a response from the Chief of Naval Information.

This is almost as good as the time the Navy trolled the Army over finally getting its hands on Tom Hanks. Almost.