DoD tweets picture of ‘tanks’ that are definitely not tanks

"You get an F in armor identification." 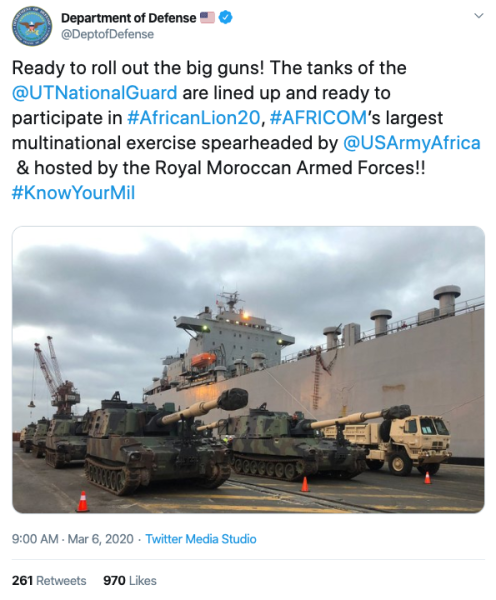 The Department of Defense wants you to #KnowYourMil but whoever posted to their Twitter account on Friday doesn't know the difference between a self-propelled howitzer and a tank.

The DoD's official Twitter account posted on Friday that it was “[rolling] out the big guns” with “the tanks of the Utah National Guard,” along with a photo of the aforementioned quote-unquote tanks lined up for a military exercise in Africa.

However, the photo showed roughly half a dozen M109 Paladins, which are self-propelled howitzers crewed by four soldiers that can fire 155mm artillery shells out to about 19 miles away. Although the Paladin features a cannon and tracks, a tank it is not.

“You get an F in armor identification,” replied Joe Plenzler, a retired Marine public affairs officer.

Task & Purpose looked more closely at the photo and determined that the truck parked beside the Paladins was also not a tank, nor was the ship, the pier, or the orange traffic cones.

The Utah National Guard was not amused.

This isn't the first time DoD has screwed this one up. In November, the DoD's official account tweeted a picture of an M1128 Stryker Mobile Gun System that it identified as an M109 Paladin.

“Great catch!” the account tweeted after many people pointed out the error. “Proper vehicle platform identified – this is the M1128 Stryker Mobile Gun System. Thanks for knowing your mil!”