The Pentagon has revamped its official website of Defense.gov with better-looking graphics, improved experience, and snazzy videos of cartoon soldiers... 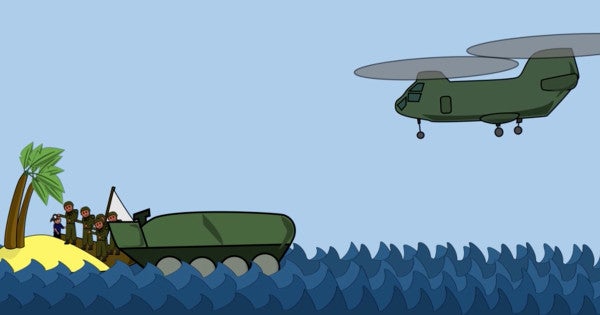 The Pentagon has revamped its official website of Defense.gov with better-looking graphics, improved experience, and snazzy videos of cartoon soldiers protecting our way of life.

“This change was long overdue,” White said. “Drawing on lessons learned from our successful #KnowYourMil campaign and best practices from across the web, we are making the necessary reforms to improve how we share information and engage audiences. We now have the modern website needed to more completely share our military's story with the American people.”

Part of sharing the military's story is through an animated video that explains what the military actually does. The cartoon format and simplistic language, however, seems to be better suited to an audience of kids rather than everyone.

The Army, according to the video, uses people, tanks, and helicopters to “fight and defeat bad guys on land.” Good job, soldiers!

Meanwhile, “it's all about the water” in the Navy. “They work on it, above it, and below it,” according to the video, which further explains that sailors are keeping seas safe so that food, cars, and your phone can get from there to here without getting stolen or destroyed by cartoon pirates.

The Marine Corps: “A bad guy's worst nightmare.” Marines come from sea and air to “fight adversaries on land, and they are very, very good at it.”

Air Force: Their job is “to fly, fight, and win in the air, space, and cyberspace. “

Looks like we know what to put in next year's recruiting commercials.

You can check out the new DoD website here.