We may earn revenue from the products available on this page and participate in affiliate programs.   Have you ever... 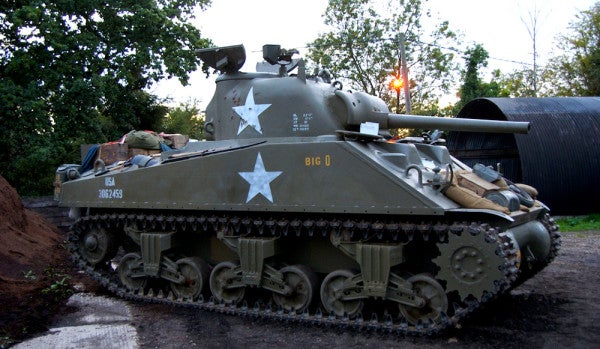 Have you ever found yourself driving around in your boring car, daydreaming about whipping down the highway in a Humvee, with the sun on your face and wind in your hair? Well, apparently you can. All it takes is a couple thousand dollars, a massive driveway, and maybe some mild experience in mechanics.

Semantics aside, there is a surplus of decommissioned military vehicles up for grabs through various auction sites. If you’ve got the resources, these five military vehicles are looking for new homes, maybe even your house.

The Heavy Expanded Mobility Tactical Truck, more lovingly referred to as the HEMTT, is a tactical powerhouse of a truck. It was originally designed to replace the Army’s five-ton cargo truck in the 1980s, and although it doesn’t match that carrying capacity, it clocks in at 62 miles per hour — incredibly fast for a cargo truck. Though there aren’t any up for grabs at the moment, these babies cost anywhere between $1,500 and $54,000 on a government vehicle auction site called GovPlanet. The price typically depends on how tricked out of a truck you’re looking to buy.

Commissioned around the Gulf War, the Light Medium Tactical Vehicle is used for cargo transport. Able to carry a whopping 2.5 tons, the LMTV is essentially a rock on all-terrain wheels. Because of its continuous utility even two decades after its development, the LMTV is still used in operations around the world. Surprisingly however, the price range on these trucks is only $3,000 to $7,000 on GovPlanet’s auction site.

The M939 is a six-wheel vehicle with five-ton towing capacity. It was designed for the Army in the 1970s and primarily used for supply transport on hard surface roads. Its rugged design spawned a number of Army cargo haulers, dump trucks, and an expandable bed-truck. In Iraq, a number of M939s were up-armored to withstand IED blasts while operating as cargo trucks in Iraq. Right now, GovPlanet is auctioning off one of these behemoth trucks for $6,500. But you’ll probably need to buy a house with a bigger driveway.

During World War II, this tank became a renowned symbol of Soviet imperialism. Designed in 1937, the T-34 had a lethal combination of firepower, mobility, and protection that was unparalleled during the war. The Red Army was the first to make use of them in 1940s, but these durable tanks are still in use all over the world. Its role in helping the Russians on the Eastern Front makes it a truly epic antique vehicle for a World War II enthusiast. A Czech-based company called Mortar Investments acquires and refurbishes tanks like the T-34, so they’re essentially like new. If you’re interested, you can buy one for around $30,000.

The Sherman tank is remembered for playing a pivotal role in winning World War II for the United States. It has since become a vehicle synonymous with victory and America military prowess. Its 400-horsepower gas engine, combined with unparalleled firepower, made the tank hell on wheels. They are incredibly rare, but you can buy them, according to Military Trader. The Sherman is one of the most expensive vehicles to acquire and maintain,i however, ranging anywhere from $95,000 to $300,000.

Just think, the people riding around on a tank could be you.