You Can Buy This Badass Military-Inspired Harley Right Now

Thirty years ago, Harley-Davidson purchased the rights to Armstrong, an English motorcycle manufacturer that had supplied bikes to armies around... 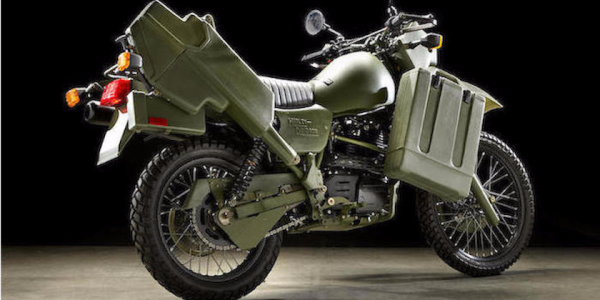 Thirty years ago, Harley-Davidson purchased the rights to Armstrong, an English motorcycle manufacturer that had supplied bikes to armies around the world. A few years later, Harley officially announced its arrival into military market with the release of one of the rarest, fastest combat motorcycles ever built: the 1999 MT500.

Let’s make this clear: these things are pure power. Sporting a gorgeous green exterior and gun cases and ammo panniers on either side, the MT500 looks every bit the part of a military hog. They’re proven, too, with earlier versions having combat experience in Desert Storm and the Falklands War between England and Argentina. But to truly appreciate this beast — and understand why Harley-Davidson purchased Armstrong in the first place — you’ve gotta look at the heart of the beast.

The secret behind the MT500 is its 500cc, 4-valve Rotax engine. Austrian-engineered and designed for every possible landscape, this dominant dirt track engine was the ultimate prize for Harley in its acquisition of Armstrong — and the reason these bikes can handle rough terrain and hit 90 miles per hour despite their burly frames.

Unfortunately, these features weren’t enough to make this motorcycle a military staple. Due to its exposed engine’s easily detectable heat profile — which the ammo case panniers were meant to disguise — and other hangups, the MT500 never lived up to its potential. As a result, many estimates claim there are fewer than 500 in the entire world, making this rugged rarity a favorite among collectors.

If you’re in the market for a pristine, never-ridden Harley-Davidson MT500, you’re in luck: there will be oneon the block at the Las Vegas Motorcycle Auction on Jan. 26. Have your checkbook ready — the asking price will likely exceed $20,000.