When they arrive at the Naval Academy, first-year midshipmen are given a pair of standard-issue dress shoes to shine, maintain,... 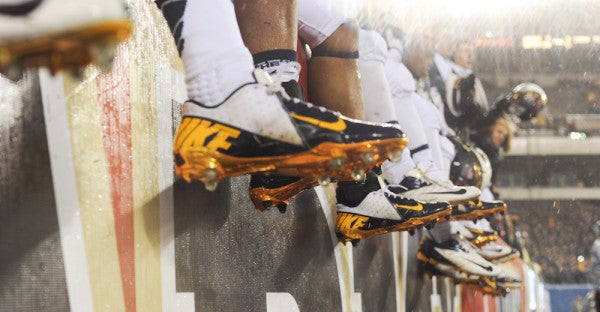 When they arrive at the Naval Academy, first-year midshipmen are given a pair of standard-issue dress shoes to shine, maintain, and wear almost every day for four years. That’s a lot of miles to walk in dress shoes — to classes, to parades, to meals. And while this is a problem for everyone, the impact has been most notable on the football field, according to The Washington Post.

Navy’s football team has been kicking ass and taking names for years, rising above just being a service academy team, and proving itself to be one of the fiercest programs in the country. But during the 2016-2017 season, the midshipmen lost their final three games — relinquishing their 14-year winning streak to their Army rivals in the process. The end of the season was marred by injuries, and the team’s staff started to notice that many of them were foot-related.

“We had a huge summit among the training staff, the weight room staff, equipment people,” Navy coach Ken Niumatalolo told the Post. “What could it be?”

The answer, they surmised, was the hard-soled uniform dress shoes.

“We recognized that a lot of these kids, their foot injuries could be caused by their uniform shoes,” Jim Berry, Navy’s assistant athletic director for sports medicine, told the Post. “We noticed some of the kids, their heels were starting to wear, kind of like dress shoes you might have had for a few years. Your back heel is kind of worn out.”

And these midshipmen wear the worn-out, hard-soled shoes for nearly 10 hours a day, the Post estimated. Although Niumatalolo and Berry couldn’t conclusively suggest that the footwear is the only problem, one orthopedist certainly believes there is a correlation.

“Certain types of injuries I would say it certainly increases the risk for,” sports orthopedist Thomas Sanders told the Post. “I would think stress fractures would absolutely be created in that setting because dress shoes tend to be tighter. They tend to not have as much support, especially if you’re doing a lot of standing.”

There is no shortage of scholarly research on lower-extremity injuries across the military. One 2011 study by the Defense Department estimated that foot and ankle injuries are among the leading causes of lost training and time in theater.

According to the report, between 2000 and 2006, “16% of soldiers were clinically seen at least once for an .” And annually, 60% to 70% of all active duty soldiers who have issues with their feet or ankles reported excessive strain or sprains.

In order to prevent the injuries, the agency suggests that service members “replace old or worn footwear” — something that midshipmen rarely do.

The midshipmen, who face off in their first game Sept. 1 against Florida Atlantic University, are taking precautions to ensure that this season doesn’t turn out like the last.

“All of us, myself, all of us have to learn better because people get hurt, but it can’t be because of our negligence,” Niumatalolo told the Post. “We’ve got to do the best we can and make sure that we look at everything, look under every stone.”