Enroute To His Honeymoon, This Marine Saved A Vietnam Vet’s Life On The Side Of A Highway

When a motorcycle accident left a rider severely injured on the side of the highway, Marine Staff Sgt. Dustin Gill... 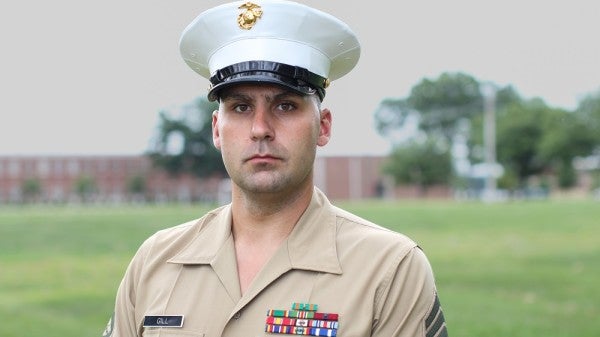 When a motorcycle accident left a rider severely injured on the side of the highway, Marine Staff Sgt. Dustin Gill sprung into action.

On July 31, Gill, a Marine recruiter in Springfield, Massachusetts, and his wife Cynthia were driving along Interstate 26, headed for their honeymoon cruise when the newlyweds hit heavy traffic in Bowman, South Carolina. That’s when Gill saw the source of the heavy gridlock.

As he approached the accident, Gill saw that the man’s leg was severed below the knee and immediately applied the skills he learned during two deployments to Afghanistan, to save the man’s life. Using a tire iron and a belt from a nearby bystander, Gill fashioned a makeshift tourniquet.

“I used the bar to twist the belt as tight as I could to stop the bleeding,” Gill said. “I had my wife grab a blanket out of the car so I could cover him up, so he didn’t see his amputated leg and go into shock.”

Once the wound was cinched up, Gill directed onlookers to call 911, while he worked to clear traffic, directing cars out of the way to make space for a helicopter to land — essentially turning the side of the highway into an ad hoc landing zone. With a pen and paper, Gill took notes to pass on to the EMTs, and kept the man talking. When the first responders touched down in a medevac chopper, Gill helped to apply a proper tourniquet.

“We kept him talking as much as possible to ensure he maintained consciousness and to give as much information as we could about him to the EMTs,” Gill said, adding that when he saw Wingert injured, instincts honed during his work-ups and tours as a security platoon machine gunner with 8th Engineer Support Battalion, 2nd Marine Logistics Group, took over.

After the miraculous intervention, the two honeymooners went on their way, but they kept in touch with Wingert, stopping by to visit the veteran and his family in late August.

“Dustin and his wife came down Saturday, and they spent several hours here,” Wingert said of their visit.